Well I done it! Got bored after the holidays and bought a Raspberry Pi credit card sized computer ($35), the least expensive LED TV and a Logitech wireless Keyboard/Mouse combo. The way I ordered the kit it cost almost twice as much, but it came with a good 2.5A powersupply, a pinout strip, a solderless breadboard, parts to play with and a wireless dongle. Brings back memories of process automation in my past.

My first Raspberry project was to get introduced to Linux again, actually a very good OS. It came with Python27, Python32, C, C++, Ruby and Java preinstalled. I used IDLE and Python27 to control some of the many Raspberry pins to exercise 4 LEDs (red, yellow, blue and green). You can't draw too much current, savely about 15 mA, but that can be remedied with an inexpensive power MOSFET that can drive a motor and also isolates the Raspberry Pi from damaging voltages.

See the MOSFET video at: https://www.youtube.com/watch?v=I1h-HZmIJ4E

Another good video on MOSFETs:
https://www.youtube.com/watch?v=Te5YYVZiOKs

Edited 7 Years Ago by Lardmeister

The new model Rapberry Pi 2 has just come out. It is now a quad core 900 Mhz CPU with 1 GB RAM running about 6 times faster than the Raspberry Pi B+ model.
The size and connections have been kept the same as has the price of $35.

Can barely wait to get my hands on one.

Nice snippet. Don't forget the arduino does this out of the box. It is meant to directly interface with things like leds, or other hardware protocls.

Not sure if the arduino allows Python as conrol language.

Not sure if the arduino allows Python as conrol language.

I'm unsure too as I've never needed to use anything but the standard arduino language which is a mix of c and java. The IDE unfortunately runs on java.

With the arduino you wouldn't need a mosfet either, just attach a suitable resistor, although pins 12, 13 has one built into the board.

Below is a picture of a test with a seven segment led, the same principal is used for standard leds you just send a digital 'high' to the pin out. 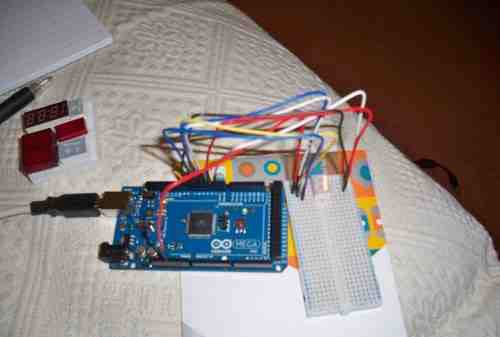 You could probably use reduce the number of wires needed by multiplexing a TPIC6x595 shift register.

Edited 7 Years Ago by iamthwee

People have connected the Arduino with a Raspberry Pi via a USB cable and get the best of both worlds since the Raspberry Pi lacks analog IO and the Arduino's computing power is rather limited.

I actually had to make a line follower robot few years ago and for the design I made a circuit board which is 'literally' what andruino is except that the microcontroller I used was ATmega32 instead of ATmega(not even sure what they use on Andruino now xD)
but then I used c to program it and it was pretty cool to play around with. Indeed having Andruino and their own language and IDE is faster way to develop embedded software and yea #Vega, I think you are required to use their language but it has barely any difference compared to C and their tutorials are pretty easy to understand as in how to control the board. It literally comes down to setting pins as either input/output and playing with the values on them, lots of inbuilt functions etc

I am not very familiar with raspberry PI but it seems like it has a high potential, hopefully I'll get my hands on one of these later on

I am using my Raspberry Pi (RBP) as my Linux machine too. Some innovative folks have stacked a number of RBPs to successfully model an inexpensive super computer.

Sounds:
I have used Python module PyGame to play sounds and have send the sound to my TV monitor via the HDMI cable. The RBP does have an extra audio connector that probably can go to an amplified speaker, but i haven't used it yet. You can also use Python to create a squarewave and apply that to one of the general purpose output pins to drive a small piezoelectric speaker directly.

Edited 7 Years Ago by vegaseat

The Raspberry Pi has 2 connectors that can be used with an inexpensive video camera element. There seem to be a lot of folks that use the RBP as a small programmable camera.

Add a motion sensor and you have a good system for wildlife pictures/videos.

Edited 7 Years Ago by vegaseat

I have a raspberry pi(Using it right now) and an arduino.Ill see if I can use them together. Iam useing the arduino for a science expiriment and know both python and sketch(I think that is the language that arduino runs on.) Thank vegaseat.

Please list your traceback error message, so somebody can help you!

Hmmm, highligting the code by double clicking works, but I have no luck with copy and paste to an editor on Debian Linux (Windows works fine).

I left a copy of the code on pastebin
http://pastebin.com/N5mxYfVA

I did some detective work using Python looking at some of the ordinal values. I found pairs of ascii values of 160 and 194 that seem to sneak in from the Linux clipboard during copy and paste. These characters are not visible in the editor, but gives a Python syntax error (plenty of those errors).

So I wrote a small Python program that takes the whole offending code as one string, loops through it character by character. It skips the offending characters and builds up a corrected code string that is then saved to a .py file. The new code file works like a charm in the Idle IDE.

Edited 7 Years Ago by vegaseat because: pastebin
Be a part of the DaniWeb community