Hello guys, I have built another small GUI:

Even before knowing whether the layout of the application I have built is right, I am facing another big problem. At compiling time I get the following error:

I had a look online and it seems that it has something to do with arrays but for the life of me I don't seem to be able to find the error. ANy idea?
Once that solved we can have a look at any possible error in the layout :-)

Here is the code:

And the test class

When it said "Recompile with -Xlint:unchecked for details." that wasn't just to fill in a bit of spare time"
Do what it says and you will get a proper error message with details of the problem and the exact place where it was found.

Sorry I didn't realize it was telling me to do it again with the option. Here it is:

OK
With Java 1.5 we got type variables, and these were retro-fitted into the existing classes. In the case of JComboBox this was enhanced to JComboBox<E> so you could specify the type(s) of object that could go in the combo box, and the compiler could (1) check that you were using the right kind of data and (2) use the selected value without having to cast it with an unchecked cast.

You can still use JComboBox without specifyinga type, (that's called using a "raw type"), but it generates a warning that you should specify a type, as in
JComboBox<String> jcb = new JComboBox<>(someStringDataValues);

Uhm, very odd the book I took the exercise from doesn't mention anything at all on the subject.
But surely the compiler should give you the possibility to ignore such a warning and go on regardless!?
Anyway, I have amended it to this:

and the compiler doesn't complain anymore.
So, the layout, here it is 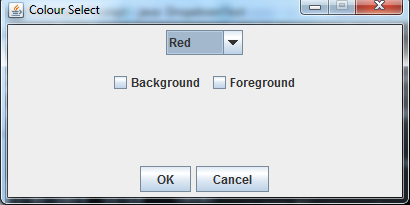 It looks a bit awful I must say. A couple of things I would like to ask:
My combo box doesn't have any width applied to it. To get the combo box to extend all the way across the window, do I have to create a renderer?
Then somehow the buttons are really far at the bottom. Was my choice of layout managers really wrong? I have used a borderLayout to stack the panels containing each groups of controllers ont he top of one another and I used a flowLayout for each controller pairs, including the combobox.

Edited 6 Years Ago by Violet_82

Maybe your book was written before Java 1.5? Lots were!
It is only a warning (a "note"). Your code has been compiled sucessfully, so you can ignore it and run the program.

The width of the combo box has been determined by its contents - it's just wide enough to hold the longest String in its values, which is perfectly sensible for this layout.

Was my choice of layout managers really wrong?

It makes perfect sense to try the simplest/default layout managers first. For most if us it's a bit of a mystery exactly how each manager will work, whether it will honour any or all of your setMin, Max, Preferred sizes, how it will move stuff when the user resizes the window... you just have to try it and see.

But if control of the layout is important to you... (you know how I would finish that sentence!)

Thanks JamesCherrill. I think the book has been written long after JAVA 1.5, it's deitel and deitel 9th edition.
Yes, I noticed that the width of the combo box was determined by the longest element when I clicked on it :-)

And yes, by now I know very well how you would finish that sentence :-)! There is also another reason why I am not using GridBagLayout: it's because the book I am taking the exercises from doesn't mention GridBagLayout and therefore it assumes that the exercise can be completed with other layouts :-), that's why I was wondering whether my choice of layout manager was wrong.
I came across this render thing on the net, so I thought that perhaps it will help me to set the width of the combo box (although as you said and I agree with that, it makes perfect sense to have it as long as the longest string, but still I can see that in the exercise it is as long as the whole box, so I thought I'd attempt to do that too)

I'm perfectly sure you can do this without a custom renderer. You use those to control how the "inside" of the component is painted, not how they get placed in the layout.

It's odd that BorderLayout hasn't put your combo box all the way across...

aha - just noticed you added the combo box to a completely unnecessary (indeed, disasterous!) panel. The combo box gets in size from its contents, the panel gets it size from the combo box, but then when it's added to the border layout the panel is resized to full width, and the panel then centers the combo box.
You only need a panel if you want to group 2 or more components. A panel with just one component in it is at best useless and at worst disasterous - as in this case. Just get rid of it!

(Didn't we cover unnecessary panels in your previous exercise?)

Edited 6 Years Ago by JamesCherrill

oh I see, sorry I will get rid of it then. Well, in the previous exercise you said that one of the panels wasn't necessary because it had only one element, but you never mentioned that it could have been a disaster to add it in :-)! Lesson learned, next time I will use it to only group 2 or more elements. So essentially, when there is only one element we can add it directly to the jframe, is that what we are saying?

Yes
("Disaster" was a but strong, but it does change the default layout, so you do get different results with or without the panel)

Edited 6 Years Ago by JamesCherrill

Edited 6 Years Ago by mKorbel

right thanks guys. @JamesCherrill: offending panel removed, much better now thanks :-)
@mKorbel ok thanks, didn't occur to me I could use only one jpanel :-)!

Sign Up — It's Free!
Recommended Topics
Not what you need?