By redesigning your app to stay inside the limits. It's programming knowledge that you can't change a single signed 16 bit integer to be greater than 32767 but you could use two 16 bit signed integers to extend the mythical apps range. Same here. You break up your database so …

You have to ask if QB64 extended those limits or break your data up into more files.

By redesigning your app to stay inside the limits. It's programming knowledge that you can't change a single signed 16 bit integer to be greater than 32767 but you could use two 16 bit signed integers to extend the mythical apps range. Same here. You break up your database so data into more files which don't exceed the limits yet let's you continue with QB45.

Or you move to another language/dev-system.

Why isn't a look at QB64 worth your time?

PS. I did not find documentation to confirm if QB64 extended this area. I leave that to you and the QB64 authors and their forums. I find it nice there is an alternative but documentation is a little lacking as is usual with such things.

Edited 1 Year Ago by rproffitt
paydata commented: BTW: I'm not sure how I answered you the first time I need help! Newbe! +0

Even as a new programmer, you would have to learn about limitations. I shared a bit about how a 16 bit signed number has limits. This applies to your issue and is why there is no instant fix.

New or not, you learn how to work around limits.

Just like you do when you need 2 gallons of water and you have a 1 gallon jug. You get a second 1 gallon jug. That's the simple concept of working with more data than you can fit in one file.

For example if you were programming up a phone number database and you had the 32,767 limit but you wanted to hold all of the USA you have to think of how to use more 1 gallon jugs.
A first cut workaround would be to place all names that start with the letter a into the datafile called "a.dat", then for folk with the name with b into "b.dat" and so on. While that only extended our possible data set to 851,942 it is a start and may be enough for a particular dataset.

Then we have QB64 which may extend those limits. 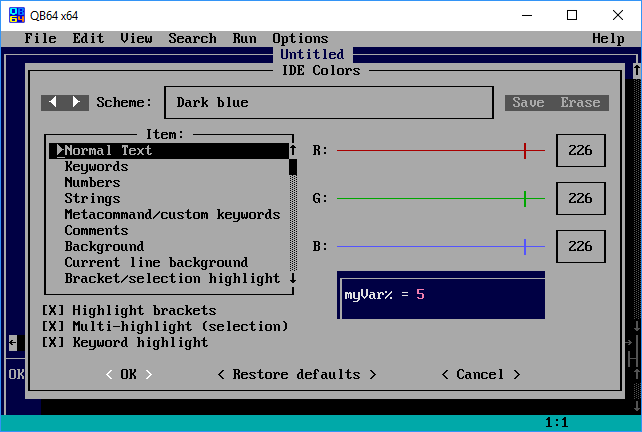 Reach out to all the awesome people in our programming community by starting your own topic. We equally welcome both specific questions as well as open-ended discussions.