The deadmau5 speaker brings Mau5head madness to your mobile music

10 Years Ago Updated 10 Years Ago happygeek 0 Tallied Votes 551 Views Share
Manufacturer
KitSound
http://kitsound.co.uk
Price
$40
Pros
Decent sound (especially when paired up), whacky design, great fun
Cons
Not cheap, not the best audio experience ever, cable way too short
Summary
Go on, admit it, you've always wanted a dead mouse with freaky lit-up eyes to sing for you. Now your dreams have come true with the KitSound deadmau5 portable speaker. The sound is better than you might expect from a novelty item, but not brilliant. That said, when you pair a couple of them up it improves greatly and is perfectly capable of shaking the room as long as it's a very small one.
Rating

If you take one look at the deadmau5 portable speakers from KitSound and immediately think that they have been inspired, somewhat badly, by Mickey Mouse then I'm afraid you are showing your age and lack of cool. If, on the other hand, you are some hip young thing then you will instantly recognise the hand, or should I say the head, of deadmau5. 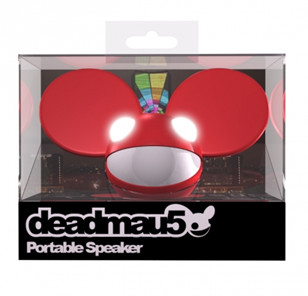 The Canadian DJ and producer known as deadmau5, real name Joel Thomas Zimmerman, might be based in Toronto but he has earned a global reputation in the music business, not least courtesy of his habit of performing while wearing a giant mouse head. The mau5head, as deadmau5 refers to it, comes in many different guises and is pretty much a trademark for the man and his music.

You don't have to be a fan of either to warm to the deadmau5 portable speaker, although to be honest it probably does help. If you are firmly in the 'never heard of him' camp then this might possibly remain filed in the 'bit too pricey for a novelty' drawer. Which would be a shame as it's not actually too expensive if you shop around (I found an Amazon marketplace dealer in the UK selling brand new ones at £12.99 which is about $20 or half the rrp) nor is it just a novelty. These speakers actually work well enough to be listenable to.

OK, so the audio quality isn't the greatest on the planet but what do you expect from a golf ball sized device? That said, it's far from the worst that I have heard from such a small speaker either. The actual specs are a frequency range of 50-20kHz, 36mm driver unit and impedance of 4.0hms. All of which translates into quite a surprisingly loud sound, but not an awful lot of bass or warmth to it. A nice feature, which helps boost the sound considerably, is that you can chain more than one deadmau5 together. I have two here, bright red one with rubbery ears and a chrome plated one with hard plastic ears. Linking them together and then plugging them into my iPhone was a revelation: much better than the iPhone speaker, of course, and exponentially better than simply plugging two single units into the thing might suggest. 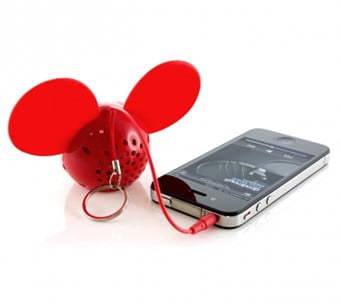 I don't know what the proper plural for a deadmau5 might be, deadmi5e just doesn't look right, but whatever it is I know that a bunch of these plugged into your MP3 player and all with their eyes lit up would freak me out. Kind of like a mouse version of Village of the Damned! But I digress.

Talking about plugging these into anything brings me on to one of my major complaints, and that's the stupidly short 3.5mm jack cable. No, the cable is not just 3.5mm, but it isn't a whole lot better either at just 150mm. This is way too short, and although you can use a cheap extender cable I would have preferred to have seen a sensible bit of length straight out of the box at this price point. The supplied USB battery charging cable is better at 220mm, but even this feels a bit on the skimpy side. Oh, and the charging port for plugging this in is bizarrely located on the underside of the speaker so you cannot charge it while it is standing upright. Poor design that...

On the plus side, the deadmau5 works with pretty much any device you throw it at from iPhones to Androids, MP3 players to tablets, laptops to, well, you get the idea. It's one of those neat gift ideas for someone into their MP3's who might like the idea of taking off the headphones once in a while.

You can watch the deadmau5 speaker being unboxed here.

Interesting speakers. By my opinion though, it looks like a mickey mouse key chain...
Unfortunately, I am a teen and I hate deadmau5... and all other DJ's, dubstep, any song with screaming... Those are not important.

I think a good feature it has at least is its ability to work with many devices... that's all the credit i give to these mickey mouse key chains... :P