I have a c# project to Create a console project named Cards that includes a struct Card, two classes Deck and Hand, and two enums: Rank and Suit. I attached a require output for this project. I have all my class but when I compile it only show the first few line comparing to the whole output. 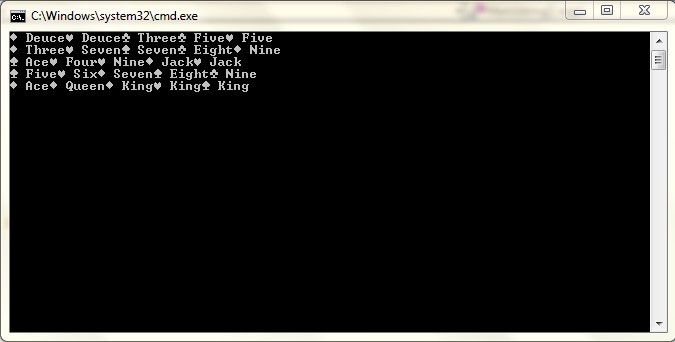 1) IsStraight will never return true because in line 85 you compare it with itself and it won't be 1 rank more than itself. You can fix this method by adding one keyword to it. It will also never detect a royal straight.

2) In your override of ToString() you build a string by adding to a string. This is a bad practice. Use StringBuilder to build strings.

3) Your shuffle isn't the Fisher-Yates shuffle (which it looks like you are trying to do).

4) Your output is missing a routine to display the deck, and the shuffled deck. You are also missing a space inbetween each card in the ToString() method of the class Hand. You also can't expect a flush, straight or straight flush in every run, or in many runs. They are rare, which is why they are the top winning hands :)