I am creating a random number guessing game. I have 6 options. 3 Game playing levels and 3 timer levels.

You select your level and time.

Then you have a text box to enter your guess, then click guess.

I want to display an image above or below the text box to guess higher or guess lower.
I can get the images hidden until button click, but only one image displays and doesn't work properly.

I also cannot get the darn timer to work and count down while guessing. Any help please!?!

Here is my gui 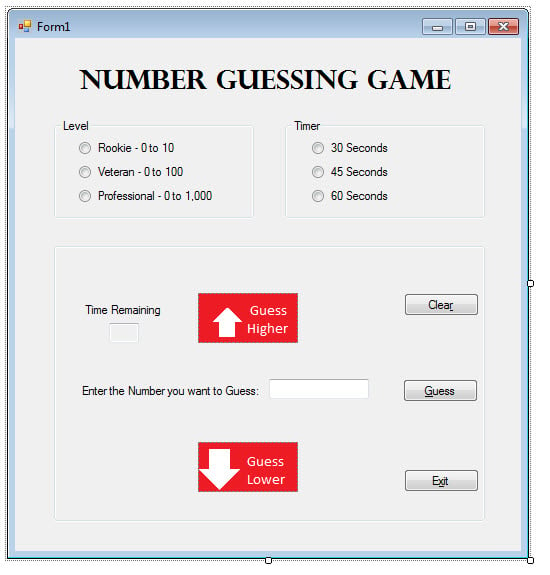 Answered by Nutster 58 in a post from 9 Years Ago

First of all, in your CheckChanged handlers, check to make sure the option button/radio button has a value of 1. If 0, then this indicates that the current button is losing a previous selection. If you don't do this, you will generate unnecessary random numbers and may set the random …

I see the issue with my image...but my timer is still jacked. I just don't know how to get the darn thing to work.

First of all, in your CheckChanged handlers, check to make sure the option button/radio button has a value of 1. If 0, then this indicates that the current button is losing a previous selection. If you don't do this, you will generate unnecessary random numbers and may set the random number to the wrong value, depending on what order the events happen.

In your btnGuess handler, you are duplicating code. You are doing the exact same thing no matter which level option is selected. You may want to check earlier in the sub that one of the option buttons is selected, if not give a MessageBox.Show letting the user know to pick a level first. Maybe leave the Guess button disabled until one of the level options is selected.

You assigned intGuess in TryParse. Comparing an Integer to another number is a lot faster and easier than comparing a string, like txtNumber.Text. Use intGuess instead. Also, intGuess is used only inside btnGuess_Click. Make the variable local to the function.

When you make one of the images visible, also make the other image invisible.

Timer_Tick is called when the timer hits its event time, as defined by Interval. You are using this function to set up the timer instead. Move this type of code into new handlers for the timer options. Each one should setup the timer's interval, set the starting time (30, 45, 60 seconds) and start the timer, or you could start the timer when the user makes his/her first guess.

The kind of thing that should be in the Timer_Tick handler should be counting down the counter on the form and stopping the game when the user runs out of time.

You can try this to let your timer working: