is euthanasia should be legal?

I don't quite understand your question and if this is a am/troll thread don't waste your time our ours.

It's already legal. We euthanize animals all the time. Be more specific and show us that you have put some thought into the matter.

Kamal_8 commented: have a case of bone marrow patient who arent able to get donor...... +0

have a case of bone marrow patient who arent able to get donor......

And your informed opinion on the subject would be...

Shouldn't everyone have the right to decide on their own death?
Banning doctors from helping patients who no longer wish to live, or worse forcing those doctors to prevent their patients getting a clean and quick death, is effectively a violation of peoples' human rights and declares "you don't own yourself, the state owns you and will decide about you living or dying".

I have mixed feelings and the arguments for both sides set evenly in my mind.

This is a topic that is relevent to me for a couple of reasons. A couple of years ago a friend whom I worked with (and sang with) traveled to Switzerland to die on her own terms rather than become completely incapacitated due to multiple system atrophy. As a cancer survivor (so far, anyway) I may one day make the same decision. I would hope that I would not have to travel halfway around the world. Keep in mind that the OP used the term "euthanasia". This is not the same thing as doctor assisted suicide. Euthanasia is what you do to a pet when you feel that the only thing the pet has to look forward to is increasing suffering before an inevitable death. I have been in that unenviable position several times over the years with multiple pets. The pets had no say in the matter.

Doctor assisted suicide is a step that is taken after careful consultation between a patient (who is of sound mind) and a physician who has taken care to inform that patient about what the future holds in terms of quality of life.

What you call "assisted suicide" is what is usually termed euthenasia when done by medical professionals.
And it's not just actively injecting a lethal substance into a patient, it may also be withholding life saving or life prolonging treatment (e.g. not performing CPR on a patient, or turning off a heart rhythm regulating machine, as well as deliberately overdosing on painkillers.

The only downside with legalising it (and I've experienced that first hand) is when hospitals or insurance companies see it as a cheap way to get rid of expensive to treat (read, non-profitable) patients/customers and try to bully/force them into signing up for being terminated.
Which they tried to do with my mother when she was diagnosed with terminal cancer in 2013. Without her consent she was scheduled for a consult with a euthenatia specialist, the true nature of the person being hidden by vague job titles but exposed by her history of presentations in forums and conferences about the topic.

The only downside with legalising it (and I've experienced that first hand) is when hospitals or insurance companies see it as a cheap way to get rid of expensive to treat (read, non-profitable) patients/customers and try to bully/force them into signing up for being terminated.

This is with all programs though. There will always be abuse of the system.

What you call "assisted suicide" is what is usually termed euthanasia when done by medical professionals.

That is completely false. If a doctor (or anyone for that matter) kills a person without express consent it is called murder. If it is done with express consent it is called euthanasia. If the doctor provides the method by which the patient terminates his/her own life then that is doctor assisted suicide. Withholding medical treatment (passive ending of a life) is not the same as hastening death by active means (injection, etc).

There have been concerns raised that by legalizing doctor assisted suicide we start on a slippery slope which leads to family members pressuring ma and pa to end their lives so the kids can grab their inheritance or avoid taking care of elderly and troublesome parents. That is exactly the reason that we have to determine (to the best of our ability) that the decision is being taken for acceptable reasons.

when hospitals or insurance companies see it as a cheap way to get rid of expensive to treat (read, non-profitable) patients/customers and try to bully/force them into signing up for being terminated.

One of the ways to guard against that is to ensure that those medical professionals who are assisting with the decision do not have a stake in the outcome.

The "slippery slope" argument has been used by various groups to oppose anything that offends their morals. For example, allowing same sex marriage will eventually lead to laws allowing people to marry animals (this is an actual argument). The slippery slope gambit can be used to make any legislation sound dangerous. Lowering the drinking age from 21 to 18 will lead to baby alcoholism. As my dad used to say, there is a difference between scratching your a$$ and ripping it to shreds.

That depends on your jurisdiction no doubt. Here both would be considered the same legally.
It doesn't matter whether the doctor gives me a lethal morphine injection or prescribes me a lethal dose of morphine pills for example, both are called euthenasia and dealt with as such during the following investigation (which is a legal requirement in order to investigate whether protocol was followed, the patient was legally able to and did give consent without coercion, etc. etc.).

One of the ways to guard against that is to ensure that those medical professionals who are assisting with the decision do not have a stake in the outcome.

Nice in theory, very hard in practice. Those medical professionals have jobs that depend on them performing those procedures after all.
If they never performed them, they'd lose their jobs. So they have a very big incentive to maintain or even increase the incidence of their services being required, even if their exact paychecks aren't directly influenced by the number of procedures they perform.

It would be somewhat alleviated by requiring the authorisation to perform the lethal procedure be granted by a professional from another hospital or outside agency, but given the slowness of bureaucratic processes and the inevitable formation of professional relationships between people (you authorise my procedures, I authorise yours...) that only leads to obfuscation and/or potentially unacceptable delays.

The "slippery slope" argument has been used by various groups to oppose anything that offends their morals.

yes, hence I don't use it. I do mention the potential problems because I've seen them in operation first hand. Before I experienced what's actually going on I wasn't willing to believe that doctors and nurses would actively pressure and try to coerce patients into signing consent forms for euthenasia. Now that I've seen it happen I'm becoming more cautious (though I admit it may well be an exception, the hospital where it happened isn't one known for its world class standards when it comes to professionalism and ethics in dealing with patients, but is sadly the one we had to deal with).

That depends on your jurisdiction no doubt.

Good point. I think by most standards, Europe is far ahead of Canada and the US on developing policy.

Perhaps it would help if the doctor signing the authorization did not have access to the name of the doctor or facility that would be performing the procedure.

This is a sad thread. I wonder what a person who believes that should be done would say if they, or someone they loved, was on the receiving end of it. I think that would change their viewpoint drastically!

If someone I loved wanted to die, because they were in too much pain or knew that their illness would soon progress to the point that their life would not be worth living (in their terms) then I, for one, would be very happy if their wishes were carried out. Indeed, I would be happy to assist them in so doing. If you really love someone then you would not want to see them suffer.

I think your argument, goodtaste, has absolutely no substance at all...

they, or someone they loved, was on the receiving end of it. I think that would change their viewpoint drastically!

If I were so sick that I became no use to society I would prefer if a doctor just got it over with. If someone I loved wanted it to end then I will grant. their wishes.

This happened to my uncle not too long ago. He chose to die. I must say, it was very impressive to hear someone say that. And then, all respect to the nurses who arranged and executed his wish.

I have so much respect for anyone that decided that fate. It takes a lot of courage to accept ones fate

I wonder what a person who believes that should be done would say if they, or someone they loved, was on the receiving end of it. I think that would change their viewpoint drastically!

As I mentioned, I had a close friend who made that decision. When I was much younger I believed that doctor assisted suicide should be legal. In 2009 I was diagnosed with thyroid cancer. After two surgeries (I have now officially been cut from ear to ear) and two courses of radiation I have been told that the cancer is treatable (for now) but not curable so the possibility that I may face the "should I stay or should I go" decision is quite real. Having said that, I still firmly believe that doctor assisted suicide is an option that should be available to me.

So you can stop wondering.

Since the thread title is Health without being more specific, I thought I'd post this amusing commentary... 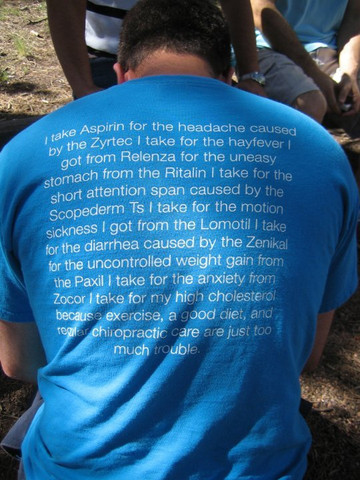 Whatever you might think, most Doctors are human and allow a very ill patient to pass away in peace.

Edited 4 Years Ago by vegaseat

This is a sad thread. I wonder what a person who believes that should be done would say if they, or someone they loved, was on the receiving end of it. I think that would change their viewpoint drastically!

People should have the power to decide over their own time of death if medically possible...
Euthenasia is legal here, with plenty of restrictions.
It requires a signed statement from the patient requesting their life be terminated, medical opinion by a specialist confirming the "unbearable suffering" and that that suffering is not going to end (iow, chronic severe pain for example), a statement from a psychologist that the patient is capable of making the decision, AND agreement from the next of kin.

While sometimes there's coercion, the system is set up to minimise the risk of that (though more can maybe be done).

Since the thread title is Health without being more specific, I thought I'd post this amusing commentary...