Adware gets aggressive on Android

Aggressive adware, of the kind that creates shortcuts on your screen or changes your search engine configuration, has arrived on Android devices and then some. According to security vendor Bitdefender, as much as 90% of free Android apps contain adware with up to 75% coming with the 'aggressive' variety. 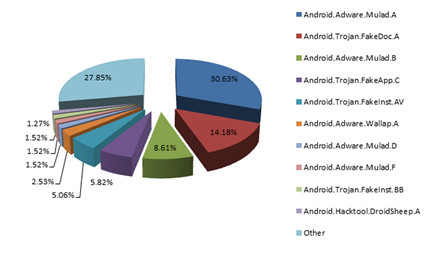 Although adware on the PC has become something of a non-problem courtesy of better educated users and software solutions both within browser clients and third party solutions combining to make it relatively easy to deal with these days. The kind of pop-up creating adware most often seen on the desktop has made the move to Android pretty successfully if that 90% saturation of worldwide free apps number is to be believed. However, far more worrying is the 75% figure attached to aggressive adware infestation.

Apps that come bundled with aggressive adware go much further than simply popping-up unwanted screens and dialogues, and amongst the common tricks seen are the creation of shortcuts on the handset home screen, the changing of default search engine settings and the pushing of notifications to the Android notification tray. While none of these may seem more than irritating at first glance, the truth is that not only can they impact upon the performance of the smartphone itself but quite literally open a doorway to potential malware and scams as well thanks to the shortcut creation and search configuration actions.

Catalin Cosoi, Chief Security Researcher at Bitdefender, lays the blame at the feet of Android itself. "Android’s permission system includes no details about adware or the resources it might access, making it hard for users to spot aggressive adware behaviour until the app has been installed" Cosoi insists, adding "aggressive adware was once limited to desktop and laptop computers but the latest findings from the Bitdefender Labs suggest the same scenario is playing out in the mobile device landscape..."

According to Bitdefender Labs, with more than 50 million installs from the Google marketplace, the most popular Android app which comes with aggressive adware is Ant Smasher. The problem being if the game is downloaded from certain third party marketplaces, which is where the aggressive adware gets bundled into the install. Likewise, variants of an adware-bundled Network Signal Booster (with a million 'official' installs in Google Play) were also found to exist on these third-party marketplaces which bombarded users with unsolicited ads and messages.

As for the adware itself, Bitdefender Labs tells DaniWeb that the 'Adware.Mulad' family is very prolific, as is 'Android.Trojan.FakeDoc.A' which is also known as the “Battery Doctor” Trojan and intercepts emails and SMS messages and broadcasts them to an attacker-controlled server; all without the users knowledge, of course.