http://www.minisuit.com/p-2016-bluetooth-keyboard-stand-case-for-google-nexus-7-fhd-2013-rubberized-non-slip-grip.aspx
Price
$24.85
Pros
Adds very little bulk to tablet, looks good, lightweight
Cons
Key spacing is poor and leads to typing errors, 'tray' design makes for uncomfortable typing, concern over long term impact upon tablet screen
Summary
As a professional journalist and author of some 20 years standing, keyboards play a pretty central role in my working life. When faced with a 7" tablet as a work-tool, and a minuscule on-screen keyboard which is unsuitable for prolonged periods of text input on the move, a keyboard case is the obvious solution. I have put the two best-selling third-party keyboard solutions for the Nexus 7 2013 to the test by using them both for a week each 'on the road' and to write both reviews. So which is best, the Minisuit 3-in-1 Folio Case or the Minisuit Ultra-Thin Aluminium Bluetooth Keyboard Cover?
Rating

As I stated when reviewing the Minisuit 3-in-1 Folio Case for the Nexus 7 2013, the most important things a writer looks for in any keyboard are key travel, spacing and feedback. Obviously a travel keyboard throws some additional requirements into the mix such as weight, size and battery life. However, when it comes to the single most important factor for me personally, and that's key spacing, the Minisuit Ultra-Thin Aluminium Bluetooth Keyboard Cover falls flat. There is simply no spacing at all, the keys just seem to merge together and it is very hard indeed not to hit the neighbouring keys when typing at any rate above 'slowly hunt and peck with extreme care'. This lack of spacing does allow for a very small keyboard solution, there's no denying that, but it comes at the cost of usability and as far as I am concerned that's a deal-breaker. 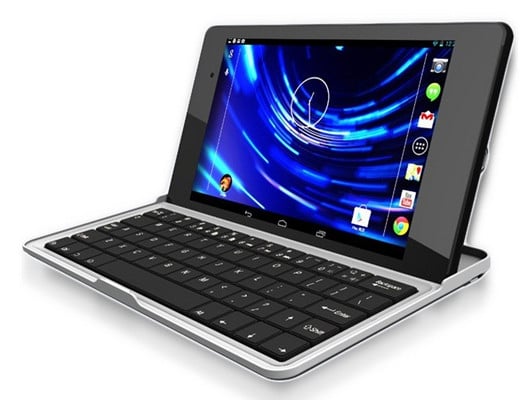 Talking of which, although the key travel feels pretty much the same as the 3-in-1 Folio (and remember these are both from the same manufacturer) the feedback is not the same at all. I do prefer the bigger, and more responsive, spacebar on the aluminium keyboard but that's as far as it goes. The lack of an escape key the tiny shift keys, and the fact that the keyboard itself is sunk into a tray all make it hard to use for any prolonged period.

The positives are mainly to do with the look of the thing, and it really does look sexy when clipped to the front of your Nexus 7 2013 model, with a similar rubberized front to the back of the tablet. It adds little in terms of weight or size to your tablet, and if appearance is your be all and end all then go for it. Or maybe don't, as I am slightly worried about the long term impact that the aluminium edges of the tray will have on my Nexus screen if I am being honest. I certainly feel much safer with the tablet wrapped up in a fuller, and softer, case. 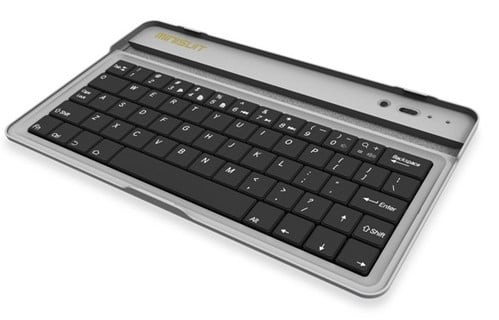 In use, the tablet itself just drops into a slot along the back of the tray and is held in place by a magnet. This is sufficient if you are using the device on a table, or an airplane tray, but don't try typing on your lap folks. Don't try throwing the keyboard cover into a bag, separate from your Nexus, just in case you might use it either. I tried this, on the basis that I prefer to keep my Nexus day-to-day in a Mojo slim case (review of that coming soon) for protection but might want to use the keyboard while in a coffee shop for example. I put both in my shoulder bag and discovered in this scenario the keyboard cover requires a case of its own to protect it. When I arrived at the coffee shop, two keys had been knocked off. They were easy enough to snap back in place, but this does flag up some worries over build quality. Of course, I do recognise that this isn't how such a cover is meant to be used, but users are funny beasts and tend not to follow the rules precisely out here in the real world. 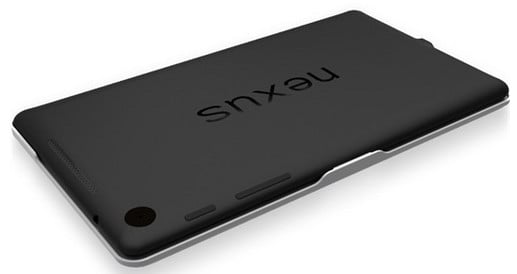 What else? Although the Ultra-Thin Aluminium Bluetooth Keyboard Cover is (slightly) cheaper than the 3-in-1 Folio Case, it is lacking in many areas. One is the battery, both in terms of taking twice as long to charge from flat (about 4 hours) yet with half the continuous operating time (50 hours) and half the standby charge (60 days) as well. As with the 3-in-1 Folio though I found the Bluetooth implementation to work as described, easy to pair and with no dropouts.

As it turned out, there was no real competition between the two when it came to real world typing. Indeed, I ended up writing this conclusion with the Minisuit 3-in-1 Folio Case and I came very close to giving up on the Minisuit Ultra-Thin Aluminium Bluetooth Keyboard Cover half way through writing that review, such was the difficulty in not making any errors courtesy of the very tight key spacing. The 3-in-1 is, quite simply in my opinion and based upon my real world experience, the most fit for purpose. Sure, there's no doubting that the aluminium cover looks the part and is sexy as hell (well, as sexy looking as a tablet cover can be) but you don't buy a keyboard case just on grounds of appearance. Nor do you buy it just for writing an occasional email or posting your Facebook replies; you buy it as something that can be used for longer periods of serious text input. Don't get me wrong, both solutions are an improvement on the stock on-screen Android keyboard for any prolonged writing session but the far superior key spacing, general layout and key feedback of the Minisuit 3-in-1 Folio wins out every time.