Receiver Operating Characteristic (ROC) plots are useful for visualizing a predictive model’s effectiveness. This tutorial explains how to code ROC plots in Python from scratch.

We’re going to use the breast cancer dataset from sklearn’s sample datasets. It is an accessible, binary classification dataset (malignant vs. benign) with 30 positive, real-valued features. To train a logistic regression model, the dataset is split into train-test pools, then the model is fit to the training data.

With our newly-trained logistic regression model, we can predict the probabilities of the test examples.

While the probabilities were continuous, we can discretize predictions by applying the decision function, the standard application of logistic regression.

And measure the accuracy of those predictions.

To visualize these numbers, let's plot the predicted probabilities vs. array position. The higher an example's position on the vertical axis (closer to P=1.0), the more likely it belongs to the benign class (according to our trained model). On the other hand, there is no significance horizontal distribution since it's just the position in the array; it's only to separate the data points. Blue circles represent a benign example; red squares, malignant. The line at P=0.5 represents the decision boundary of the logistic regression model. 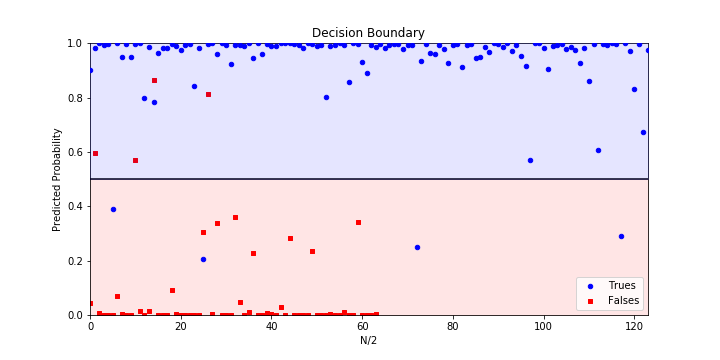 Anything above the line is classified as benign, whereas on and below are classified as malignant. Under this visualization, we can describe accuracy as the proportion of points placed inside their correct color.
However, while statistical accuracy accounts for when the model is correct, it is not nuanced enough to be the panacea of binary classification assessment. If you want to know more about the problems with accuracy, you can find that here. For now, we can review the confusion matrix and some of its properties to dig deeper into assessing our model.

When calculating the probabilities of our test data, the variable was deliberately named scores instead of probabilities not only because of brevity but also due to the generality of the term 'scores'. In the case of logistic regression, we've considered the predicted probabilities as the scores, but other models may not use probability.

The confusion matrix is a 2x2 table specifying the four types of correctness or error. There are articles on confusion matrices all over, so I will simply describe the table elements in terms of our model:

We can easily represent the confusion matrix with the standard library's collections.namedtuple:

To calculate the confusion matrix of a set of predictions, three items are required: the ground truth values (actuals), the predicted values (scores), and the decision boundary (threshold). In logistic regression, the threshold of 0.5 is the ideal optimal threshold for distinguishing between the two classes because of its probabilistic origins.

The four confusion matrix elements are the inputs to several statistical functions, most of which are listed/explained on Wikipedia. One of which we've already mentioned: Accuracy. Before, we directly calculated Accuracy by just checking whether predictions were equal to actuals. Instead, we can use the Confusion Matrix equation for finding Accuracy:

This equation makes sense; it's the proportion of correct predictions (TP's and TN's) out of all the predictions.

TPR is also called 'sensitivity' or 'recall' and corresponds to the ability to sense, or detect, a positive case. It's a more specific way of being correct than overall Accuracy since it only considers examples that are actually positive. Furthermore, TPR is the probability that the model predicts positive given that the example is actually positive. In our dataset, TPR is the probability that the model correctly predicts benign.
Note that if your model just predicts positive, no matter the input, it will have TPR = 1.0 because it correctly predicts all positive examples as being positive. Obviously, this is not a good model because it's too sensitive at detecting positives, since even negatives are predicted as positive (i.e., false positives).

FPR is also called 'fall-out' and is often defined as one minus specificity, or 1 - True Negative Rate (TNR). FPR is a more specific way of being wrong than 1 - Accuracy since it only considers examples that are actually negative. Furthermore, FPR is the probability that the model predicts positive given that the example is actually negative. In our dataset, FPR is the probability that the model incorrectly predicts benign instead of malignant.
Note that if your model just predicts positive, no matter the input, it will have FPR = 1.0 because it incorrectly predicts all negative examples as being positive, hence the name 'False Positive Rate'. Obviously, this is not a good model because it's not specific enough at distinguishing positives from negatives.

Sensitivity/Specificity Tradeoff
From the similarly-worded TPR and FPR sections, you may have noticed two things you want in a model: sensitivity and specificity. In other words, you want your model to be sensitive enough to correctly predict all positives, but specific enough to only predict truly positives as positive. The optimal model would have TPR = 1.0 while still having FPR = 0.0 (i.e., 1.0 - specificity = 0.0). Unfortunately, it's usually the case where the increasing sensitivity decreases specificity, vise versa. Look again at the decision boundary plot near P = 0.7 where some red and blue points are approximately equally-predicted as positive. If the decision boundary was moved to P = 0.7, it would include one positive example (increase sensitivity) at the cost of including some reds (decreasing specificity).

One of the major problems with using Accuracy is its discontinuity. Consider the fact that all false positives are considered as equally incorrect, no matter how confident the model is. Clearly, some wrongs are more wrong than others (as well as some rights), but a single Accuracy score ignores this fact. Is it possible to account for continuity by factoring in the distance of predictions from the ground truth?

The most complicated aspect of the above code is populating the results dictionary. It loops through the **fxns parameter which is composed of confusion matrix functions, then maps the functions onto all of the recently-computed confusion matrices.

Now, there is no fixed threshold and we have statistics at every threshold so prediction-truth distances lie somewhere within the results dict. But how can we summarize, visualize, and interpret the huge array of numbers?

Receiver Operating Characteristic Plots and Beyond

Recall that the end goal is to assess how quality our model is. We know its Accuracy at threshold = 0.5, but let's try and visualize it for all thresholds. Using our previous construction:

acc now holds Accuracies and thresholds and can be plotted in matplotlib easily. 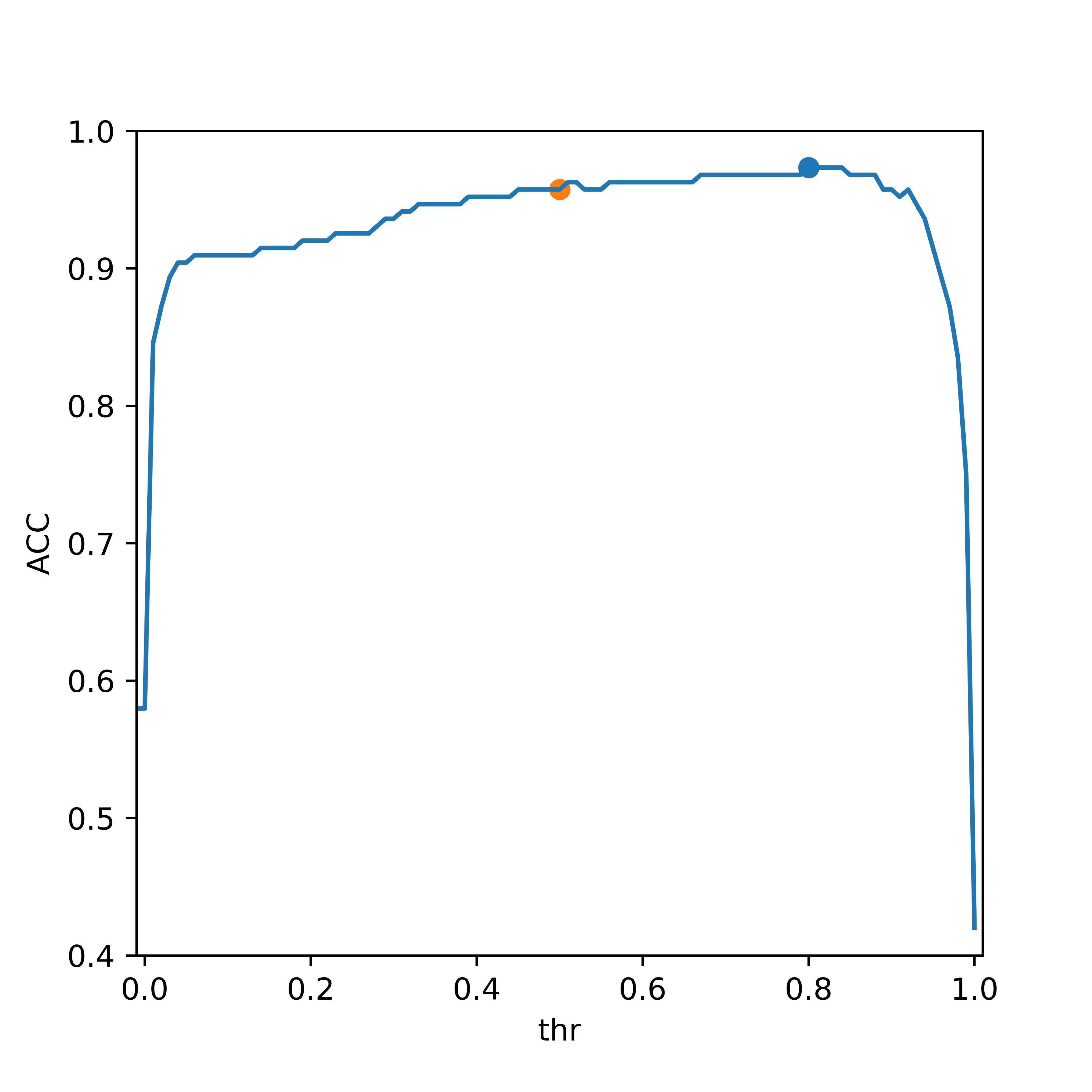 ROC plots are simply TPR vs. FPR for all thresholds. In Python, we can use the same codes as before: 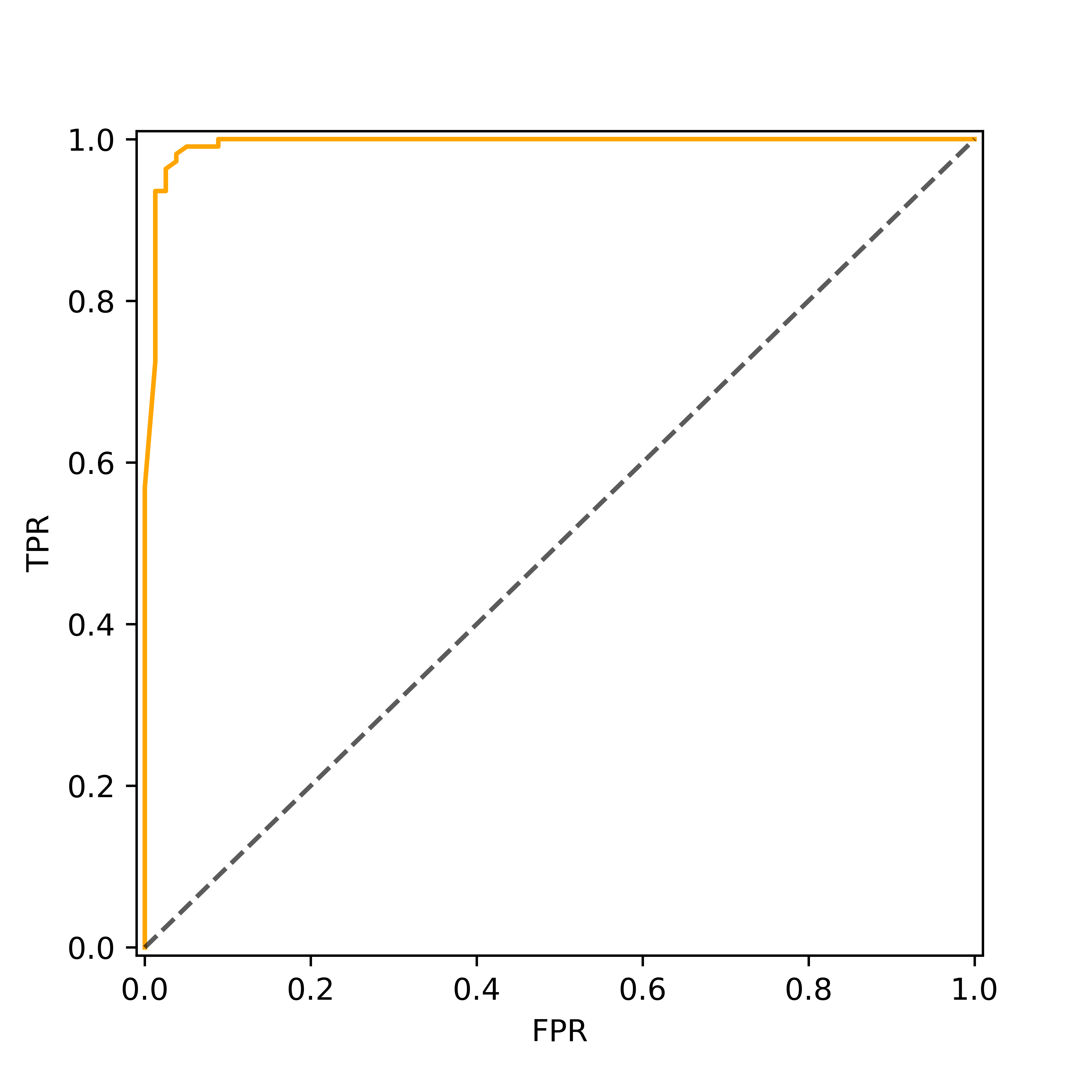 The best scenario is TPR = 1.0 for all FPR over the threshold domain. One trick to looking at this plot is imagining the threshold as increasing from right to left along the curve, where it's maximal at the bottom left corner. This makes sense because, in general, at higher thresholds, there are less false positives and true positives because the criteria for being considered as positive are stricter. On the other end, lower thresholds loosen the criteria for being considered positive so much that everything is labeled as positive eventually (the upper right part of the curve).

The worst scenario for ROC plots is along the diagonal, which corresponds to a random classifier. If the curve dipped beneath the random line, then it's non-randomly predicting the opposite of the truth. In this case, just do the opposite of whatever the model predicts (or check your math) and you'll get better results.

The most important thing to look for is the curves proximity to (0, 1). It means that it is balancing between sensitivity and specificity. While the curve tells you a lot of useful information, it would be nice to have a single number that captures it. Conveniently, if you take the Area Under the ROC curve (AUC), you get a simple, interpretable number that is very often used to quickly describe a model's effectiveness.

The AUC corresponds to the probability that some positive example ranks above some negative example. You can go deep into this interpretation here. Nevertheless, the number gets straight to the point: the higher the better. It factors in specificity and sensitivity across all thresholds, so it does not suffer the same fate as Accuracy.

For our dataset, we computed an AUC of 0.995 which quite high. However useful, sometimes you want to get more specific than a generic number across all thresholds. What if you only care about thresholds above 0.9? Or, what if a false negative has severe consequences? Those kinds of questions can be addressed elsewhere.

This tutorial was a pedagogical approach to coding confusion matrix analyses and ROC plots. There is a lot more to model assessment, like Precision-Recall Curves (which you can now easily code). For further reading, I recommend going to read sklearn's implementation of roc_curve.

python
Dani commented: Thank you so much for contributing this! +16
rproffitt commented: Thanks. I found to have some good resources I hadn't seen before as well. +15
About the Author

Reach out to all the awesome people in our computer science community by starting your own topic. We equally welcome both specific questions as well as open-ended discussions.