http://www.guinnessworldrecords.com/gamers
Price
$14.99
Pros
Packed full of gaming facts, great illustrations, interesting feature spreads
Cons
none
Summary
Featuring hundreds of new videogaming records, a whole bunch of new facts and trivia, as well as a gaming quiz and the ultimate countdown of videogame villians the Guinness World Records 2013 Gamer's Edition is finally available. If you consider yourself a gaming geek in any way at all, then this book surely deserves a place on your bookshelf.
Rating

This special edition of the Guinness World Records book will appeal to geeks and nerds the world over. Not just because it is packed full of the kind of trivia that we all thrive on in social situations, but also because that trivia is firmly based in the realm of video gaming. Previous editions have been described as being a veritable gaming almanac, and this sixth installment of the series does nothing to degrade that opinion. It's packed with facts, figures, lists, stats and high quality imagery. 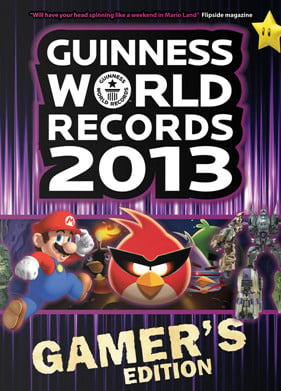 It's also more than just a collection of lists though, the 2013 edition has a number of really rather well presented and very in-depth feature spreads covering games such as Call of Duty, Grand Theft Auto and Forza. There are even some more unexpected features like the one that looks at the relationship between the mediums of comic books and gaming, or another that delves into the top 50 videogame villains of all time.

As many of you may have been drawn to this review by the mention of Bowser, Darth Vader and Donkey Kong in the first place, let's start with a quick look at the Top 50 Video game Villains list which was compiled by polling Gamer's Edition readers and resulted in more than 12,000 votes in all. The broadness of gaming genres represented is quite staggering, as are the number of years covered. This is not just a list of the current bad guys and monsters of the gaming scene, but a stroll through memory lane for those of us who have been playing video games since the days of Pong.

This list starts with Hades from the Kid Icarus game at number 50, sees The Flood from Halo enter at a lowly 31, with Darth Vader out of the Star Wars series not far ahead at 28 and the eponymous Donkey Kong managing a 14th slot. When it comes to the top 10 this is bottomed out by a new bad guy, or bad guys, in the form of Minecraft's 'Creepers' and the poll is topped by one of the old boys of video game villainy, Bowser the King of the Koopas from Super Mario Bros who first appeared way back in 1985.

It's difficult to review a book such as this without giving away all the best bits, and I don't want this to be a spoiler so I'm not going to say much more. However, as the press release includes record entries such as the 'Largest Collection of Videogame Memorabilia' which features more than 8,000 items and the 'Smallest Arcade Machine' which is smaller than an iPhone, I feel I can tease you with those. If you want to see who has been the highest earning Call of Duty player (making $135,000 in three years), what the highest margin of victory against the computer on FIFA was (the chap had scored 100 goals by half-time) or just how long Canadians Chris Gloyd and Timothy Bell played the Resistance game for to snap up the 'Longest Gaming Marathon' title (it's an eye-watering number of hours) then you will just have to read the book.

Gamer’s Edition Writer, Kevin Lynch, says: “It’s been a fantastic year for gaming, with incredible records broken by players from all walks of life. Gaming is a hugely important part of popular culture and this year’s Gamer’s Edition reflects that”.

Gaming is a hugely important part of popular culture and this year’s Gamer’s Edition reflects that”.

Not just a part of culture but an industry worth US$65 billion (wikipedia). It's a smart idea to embrace this segment of the economy.