Are your kids feral Facebookers?

New research published today by security vendor ZoneAlarm, the Facebook Child Safety Report, analysed what 600 kids aged between 10 and 15 and located around the world were up to Facebook. The end result reveals those common behaviours that increase the exposure of children to bullying online, predatory threat and other security problems. The major factor, surprise surprise, that contributes to an increase risk late night usage. 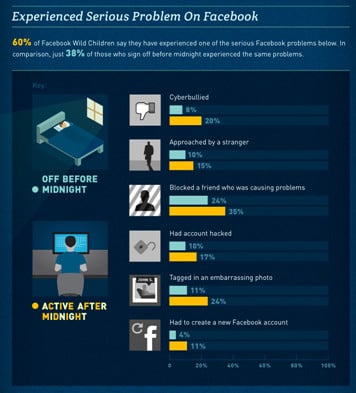 Three activities revealed a positive link with increased risk: adding friends that could well be strangers, playing those Facebook games which require access to account information and, as mentioned, using Facebook late into the night. This latter activity results, according to the research at least, in children experiencing almost twice as many problems as those kids who are offline before midnight.

What's more, these Feral Facebook kids are four times more likely to have large networks of Facebook friends that consist mostly of people they have never actually met. Another of the risk factors identified by the ZoneAlarm report.

The fact that kids active on Facebook late into the night and beyond are exposing themselves to increased risk really comes as no surprise to me, or anyone with a modicum of common sense or understanding of parental responsibility I would have thought, given that such behaviour suggests there is a total lack of parental supervision being exercised. Especially when you consider that the report reveals many of these kids are still using Facebook after 3am. 60% of these feral Facebookers have experienced 'serious problems' such as cyberbullying, account hacking, and unwanted attention from strangers as a result.

As the report authors conclude "the findings of the survey demonstrate that kids behavior online does matter. And parents’ active role in monitoring their online activity can make a difference. While dangers to children have always existed, greater access to the web and social networks like Facebook has heightened their exposure. The bottom line is there will always be risks, but there is no substitute for taking the necessary steps to avoid them.
Be aware and talk to your child if they are on Facebook after midnight..."

The full report can be downloaded here as a PDF file.

I am not surprised if someone is bullied from a social media... It's there faults for getting too involved... I am a high school freshman and i am used to seeing students on social medias while teachers teach their lessons...

Dave's, your news posts are very resourceful and quite accurate!

If you need complete parental control that records everything teens do on the web (such as Facebook) , and filters inappropriate websites, and does linguistic analysis to watch out for dangerous behavior -
such as internet predators or cyberbullys -
look into McGruff SafeGuard's Parental Control system:
http://www.GoMcgruff.com

You might remember McGruff “The Crime Dog” - Take A Bite Out of Crime - from your own childhood.

Hi marty !
thanks for your proposal. i think it's not normal and mature to give freelance to our children only because children begin rather keen on playing and jogging than in studing since the arrival and the develpment of these social networks so it will be a great help to get help to control our children.

I think that it's bad for kids to use facebook. People (especially children) need to develop the interpersonal skills provided by face-to-face interaction. Children are much less emotionally and psychologically able to handle cruelty and are still developing their personality. Ridiculous.

@susan, i agree with you (even though I am almost 15)... but you can't blame Facebook, Twitter, Instagram, etc. for the hours a teen wastes though... I wish some parents have the capabilities of controlling their kid's usages on those social media sites.

Isn't it amazing that 6 year olds and even cats have their own facebook pages?

I also noticed that those kids tend to be a lot dumber :) I notice by their tests results.

I meant 'not amazing' in as much as 'not at all surprising that there are hundreds of thousands of kids under the age of 13 using Facebook' when fooling the membership registration process is so easy. Not that Facebook is alone in this, but Facebook does (by the nature of the beast) attract far more young kids than your average site.

Be aware and talk to your child if they are on Facebook after midnight..."

I can't imagine how many young adults not knowing who are they talking to online.