Parliament will have to approve the final deal as well but it's unclear whether that vote will have the option to "undo" Article 50 or if it will be a choice between whatever shit deal they eek out and leaving the EU with no deal (Theresa May probably wants the latter).

PS Just checked and it looks like the Lords are set to amend the Article 50 Bill but are expected to pass it once amended.

AM pretty much has it. Lords in precarious situation. Their whole existence has been hanging in the balance for a long time. If they vote against A50, thwarting the will of a 4% majority of the population, they will be seen as out of touch, no longer fit for purpose etc. So they can bluster and tarry, but daren't do anything more. It.s a real shame. If we had a directly elected second chamber, they would be considered a more legitimate body and perhaps their decisions would not be taken as being against the "great" British public.

What a load of old twaddle. Brexit will mean Britain, whatever that means, will be permanently divided anyway. Whatever is decided, whatever ammendments. I keep thinking that I.m going to wake up any minute.

So Netenyahu, Trump, Brexit, May, Corbyn, KJ Un, Putin... what next Berlusconi wins Italian premiership again? There.s a reason why being of average intelligence is not good. Not good at all. Stupid people tell lies that only stupid people believe (or want to believe). Are there so few of us that see through all this blatant bullshit, showmanship and pocket-lining?

I.m almost tempted to hope for a mass economic collapse in the UK just to remind people why we have representative decision-making not a direct one. Plebiscites are rare animals thankfully. Dog knows what mass extinction event the great unwashed will throw at us next.

What did Gracchus say in the hilarious film? ... I think he knows what Rome is. Rome is the mob. Conjure magic for them and they'll be distracted. Take away their freedom and still they'll roar. The beating heart of Rome is not the marble of the senate, it's the sand of the coliseum. He'll bring them death - and they will love him for it. ...

If we had a directly elected second chamber,

It doesn't matter if the Lords is elected or not it is the power of the tabloids that is the problem. The Commons is elected and is ~2/3 pro-Remain but voted through Article 50 with relatively little faff after the tabloids called the judges who upheld the power of Parliament over the power of the executive/royal perogative "enemies of the people". The Lords have less to lose since they have long/life-time terms and a very large number are cross-party so aren't under any party's whip, and being appointed they don't have to answer to the angry electorate directly.

If people still understood the purpose of all the checks and balances in the system rather than the recent cultural myth that the more "democratic" things are the better it is - just how well "democratizing" news has turned out...

I have heard that option 1 would be disatrous for the UK, and that option 2 would be better for the UK but disastrous for the ruling party. At one point I thought they might hold a second referendum but indications were that there wasn't enough time before the deadline to do so. Now I hear that they may vote to delay the exit and possibly hold that referendum.

I was hoping that hg & ad might weigh in with an informed opinion. We don't get much in-depth on this side of the pond.

A no deal exit would, by every measure apart from those of the hard-right of the Tory party, be an economic disaster for the UK. This is evidenced by the amount of money the government has thrown at contingency planning for that eventuality which include such things as the stockpiling of drugs and even strategies for military operations in case of mass public disorder.

May has been playing a high-stakes game using the no-deal trump card with both the EU and parliament: give us the changes to the plan we want or we will walk away and everyone loses big time/vote for my plan or everyone loses big time. Which might have worked apart from the fact that May is the worse poker player ever and she is playing against the EU which has aces up the sleeve while she only has a pair of threes. Her ability to bluff is on a par with her ability to dance.

The second referendum idea makes a lot of sense, but has been played down by both the government (too scared of the European Research Group wing of her party and too scared of the government being toppled and another general election) and the Labour party (too scared of losing the vote from marginal constituences which voted leave by a margin, and too focused on trying to get into power by forcing a general election.) It may yet still happen, but would require a much longer delay to the leaving date than May is currently saying she is willing to accept (she's saying a three month extension might be possible, but no more - a referendum would take six months to organise thanks to the legalities of setting the questions and the logisitics of running the thing.) Truth is that a second referendum would probably see further splits in both the main parties, although whatever happens I suspect that neither party will survive in their current formats.

So, we are still where we were many months ago, with May delaying 'meaningful votes' (which have very little meaning anyway) so as to run down the clock to as near 29th March as possible in the hope that MPs across parties will shit their pants and vote for her deal rather than risk the no-deal scenario...

I've given up caring.

Edited 1 Year Ago by happygeek

Thanks. That's the most imformative thing I think I've read on Brexit so far.

Just so you know, the weather in Canada isn't as bad as you might think. Just sayin' ^_^. Of course we do have Trudeau and the shit pile he just stepped in.

HG has summed it up succinctly. The bit I agree with most is... "I've given up caring".

It seems very little has happened in terms of domestic policies since Breakshit was announced. Either things have been slipped in during big Breakshit news so that they fly under the radar, or the Conselfservatives have been muted. I really, really hope its the latter.

If nothing else, this whole debacle has exposed many of our politicians to be feckless, self-serving, unprincipled grandstanders. Perhaps Trump was right when he said drain the swamp. Our system seems doomed, but there again, people have short memories.

Perhaps Trump was right when he said drain the swamp.

It appears that it is all swamp. It would be like trying to get all the mud out of Elbonia (Dilbert reference). In the US, with the exceptions like AOC & Bernie Sanders, they are all either feckless, self-serving toadies, or pawns of big business. Here in Canada we have our own scandal going. We have a format AG who resigned from a high-profile position because she was being pressured from above to do something either illegal or unethical. We can believe her version of events (she has absolutely nothing to gain from her honesty and everything to lose) or we can believe Trudeau & co. who could possibly lose power for a decade if the "truth" comes out.

Can anyone tell me what is the biggest problem with the negotiated deal that people are so opposed to?

It has a "backstop" clause to maintain an open border in Ireland. This clause only comes into effect if no other solution is found during the future relationship negotiation process. It effectivey keeps the UK in the EU customs union - subject to EU customs union rules but having no say in those rules. Some people see that a such a great risk to UK sovrenty that they are willing to destroy anything to avoid it.

Ah. That's very similar to what Quebec tried to fob off on Canada years back when they proposed separation with "priviliges". At least similar in how it was perceived by the rest of Canada.

I agree with this comparison, but in part. In the future, there is a different situation.

I just read that Nathalie Loiseau, France’s minister for European Affairs named her new cat Brexit because it meows at the door but when she opens it, she refuses to go out.

A new meme about Brexit at https://imgur.com/gallery/Znkz6RF 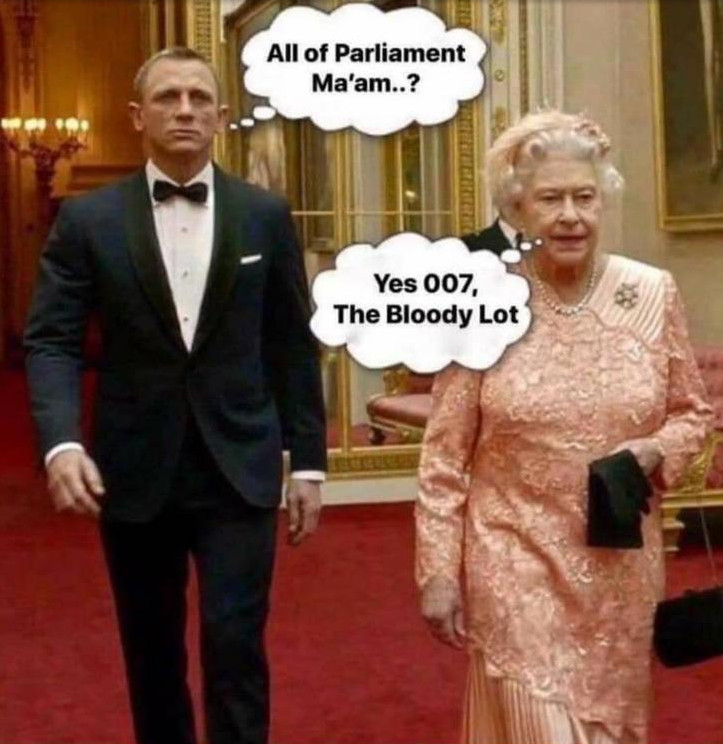 Will a Gif work? If not, click on the picture or use https://imgur.com/gallery/kiyioaZ 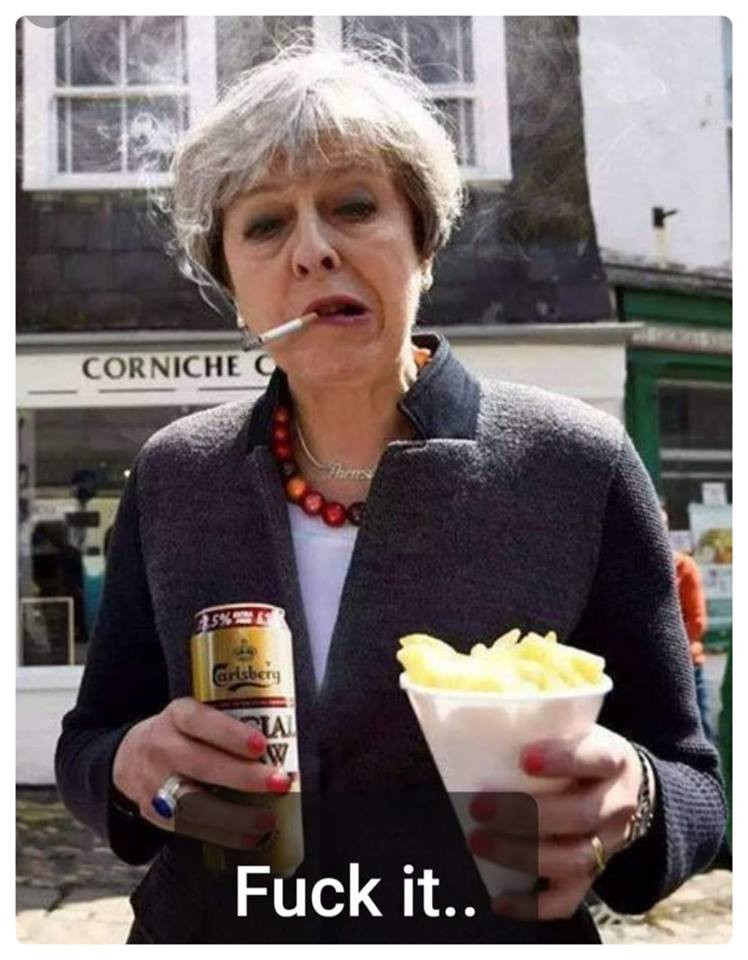 I'm going to have to watch https://www.youtube.com/watch?v=1Nxatwd-wyA more than once to figure out what was said.

PS. It's a video by Sir Stevo Timothy. Just don't bring up Metallica.

It's much more entertaining with captions on to see how badly the text is mangled.