Social media and the unemployment line

The United Nations Global Pulse, along with analytics software specialist SAS, has revealed how social media streams can be used as predictors of national unemployment line spikes.

By analysing more than half a million blogs, forums and news sites, the researchers were able to determine how social media chatter more specifically the 'conversation sentiment' expressed by it, could warn of pending unemployment increases as well as help to inform government policymakers of the likely impact of those increases. 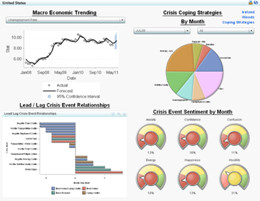 The data analysed came from more than two years worth of social media streams in both the USA and Ireland, and was checked for any references to unemployment and how people hit by it were coping. By using a process of mood scores and conversation volume comparison to the official unemployment statistics in both countries, SAS and the UN Global Pulse researchers were able to determine that increased chatter about 'cutting back' and 'public transportation usage' as well as 'downgrading the car' were positive indicators in predicting an unemployment spike.

Following such a spike, the research showed that social media conversations about holiday cancellations and mortgage foreclosures or eviction surged. OK, maybe that is predictable without doing the social media analysis, but it does nonetheless flag the economic effects of employment downturns as reflected within the social media sphere and could be useful for policymakers looking to mitigate the negative effects of increased unemployment according to the UN Global Pulse team at any rate.

UN Secretary-General Ban Ki-moon reckons that “he private sector is analysing this new data to understand its customers in real-time. Much of this data contains signals that are relevant to development. We must use it to tell us what is happening, while it is happening.”

While it is happening often means before it is reported. So, in the US for example, a rise in hostile or depressed chatter occurred some four months before an unemployment spike showed up in the national stats. In Ireland, meanwhile, increases in anxious social media conversation correlated with a spike five months further along the road while confused chat happened three months ahead of the spike.

Like you said - 'predictable' - this has been obvious to anybody with a pulse (no pun intended) for some time, however, I suppose you have to prove it. The big question is what to do with the data and how quickly they can respond to it. Politicians and the political system are so slow to bring about any meaningful change - five month warning? Hah - they need five years! Financial speculators may find it useful though, but they've probably got far more precise data trends to hand.

Edited 10 Years Ago by diafol

I know of at least one UK-based investment house which uses Twitter data to predict how the market is going and make investment decisions based upon those trends.

Wow, with all the data mining you would have thought these types of results would have been evident some time ago. Data mining and stats. will continute to be a greater predictive factor for many industries for some time if not into infinity.

Agreed: predictible, useful for the financial sector and sad that it is likely not to affect any real changes in policy/government. I know Twitter has managed to penetrate the political arena but only insomuch as to give the politicians a heads-up on what is trending - so that they can manipulate the data to their advantage, or at least try to anyway!

If accurate (which is another thing I would question - people moan about *a-lot *of shit on FB and Twitter that could sqew this data), this type of data could serve as the red flag of economic change but how likely is it that it will be used for anything meaninful?

The social media influence has really reached far beyond the borders. The whole social media world has allowed many things like that one possible.