51% of women would rather shoot themselves than shop online

That dramatic statement pretty much sums up the feelings of many people taking part in a recent survey. They suggest that online banking and online shopping are akin to playing Russian Roulette and it is only a matter of time before their security, credit cards and bank balances are breached. And women are more worried about this financial doomsday scenario than men. 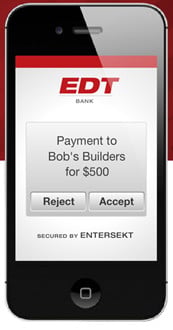 The figures from the survey which analysed attitudes towards online shopping and banking, were revealed today by mobile security outfit Entersekt and the research was undertaken by OnePoll. It suggests that 410 out of the 1000 people questioned were absolutely convinced that their online accounts will be breached at some point, this despite admitting that they not only rely upon online banking and shopping but in fact love doing both so much that they won't give them up despite the perceived risks.

In the 'real world' of offline transactions, customers will not generally let their credit cards out of their sight according to the research. Only 13% admitted to doing that in the last six months in either a shop or restaurant payment scenario. Switch to the online world, however, and only 69% make sure the transaction is secure before hitting the 'complete transaction' button, not doing so is equivalent to handing the card over and letting the waiter walk away with it.

The battle of the sexes showed something of a contrast between the attitudes of men and women to transactional security risk. Women were more worried about the security of online banking and
shopping than men, with 51% concerned about conducting financial transactions compared to just 41% of blokes. Only 65% of men bother to check how secure a transaction is before making it, compared to 72% of women.

The most worrying statistic to come out of this research though, has to be the somewhat misguided belief of 85% of respondents that the bank or card issuer would simply soak up the loss and pay for it if a card was used without authorisation. Misguided as it is the merchant, not the bank, who cops for the cost. The consumer may not care about who pays as long as it isn't them, but they should as ultimately fraud drives up the cost of shopping.

The good news is that those customers are not put off by the more robust of security measures, and 78% were happy to use banking security keys, fobs and passwords. Just a mere 18% of idiots would prefer reduced security and more ease of use as an alternative.

When it comes to mobile device payments though things are less clear cut. Customers are pretty much split about whether it's a good or bad thing, with 48% in favour, 36% against and 16% unsure. Men (32%) think it's a better idea than women (25%) but only 18% of either sex would feel comfortable using a mobile phone to perform online banking tasks when surrounded by passengers on public transport, for example.

Schalk Nolte from Entersekt comments "Just as people are looking to banks and retailers offering strengthened security, I believe mobile banking applications and services critically, should reflect this requirement. Trust is at the heart of any financial transaction and the very fact that 19% of the people surveyed are already taking advantage of mobile banking is a strong indication that it’s a service people require. Security becomes a critical requirement and all parties involved in a financial transaction need to consider security. Mobility and freedom to transact anywhere, anytime is no longer negotiable – it is the nature of the lives we live today."

ecommerce security shopping
About the Author

Very Well Said, womens realy hate to do online shoping, shoping is basically a recreational acitiity for them, and via doing shoping online, she didnt enjoy it. online shoping is somehow good for the working lady but only for limited cateogries.

What? Actually, make that WTF?

Shopping used to be a way of getting out and socializing for women...so they want to continue their activity to do shopping with their friends.

gee...women buy more than men (just an opinion don't get mad at me)....but I didn't expect that they are bothered of online transactions...
woman are more than being fickle-minded....

This is completely untrue. Women like comfort and convenience. If there is a shopping alternative to physically going to the shop, why not

Women always keeps shopping.They take such a long time to buy something.If they can do shopping on internet they will be very happy to do it.Instead of going to te shop they will find that easy sitting at home and do shopping.

ya i am agree womens buy more then man. But what women spend comes from mens......And as i think now instead of going to shop, shoppers find easy way to shop from their residenece.

Ezzaral commented: This post is amazingly ignorant. You believe women are incapable of earning anything at all on their own? -3
happygeek commented: a rather sexist remark, don;t you think? +0

But what women spend comes from mens

The good news is that those customers are not put off by the more robust of security measures, and 78% were happy to use banking security keys, fobs and passwords. Just a mere 18% of idiots would prefer reduced security and more ease of use as an alternative.

Chalk me up as one of those idiots. Citibank gives me a keyfob to use in order to log into my online bank account or issue any wire transfers, and it is the SOLE CAUSE of delayed payments to DaniWeb empoloyees every month. Instead of sending a wire transfer being a 3 minute process of logging into my bank account (potentially also validating my login with the last 4 digits of my social security #), I now have to pull out the key fob, press a button, wait for it to turn on, press and hold another button, click a series of buttons on the screen that match up to what the key fob tells me, press another button, and then I can FINALLY log in. Then if I want to send a wire transfer I have to press and hold again, enter the random digits on the screen into the key fob, enter what the key fob says onto the screen, enter the last six digits of the beneficiary's account number into the key fob, and again enter what the key fob says onto the screen. THEN ... yes, THEN ... I can send a wire transfer. Repeat the entire process for wire transfer #2. To make matter's worse, sometimes I work from home, and CitiBank refuses to issue me a second keyfob, so if I don't have it with me, I can't log into my bank account AT ALL! (This has caused overdraft fees in the past because I have no access to my back account online unless I have the key fob on me.) I think it's absolutely absurd and I hate it!

Sorry, Davey, but you're not being paid this month because I forgot the keyfob at the office yet again.

Maybe someone should tell the girls on purseforum.com ...

And, just for fun, a summary of the current eBay/eDropOff shill bidding wire fraud matter ...

More people are comfertable with on line shoping facilites , less are relictent , do not know why they are relictent

Hey i also love shopping. And online shopping is very good option to choose anything easily so many cheap and best offers avilable there.

I also think that online shopping is good option to purchase anything. There you can dig through many many online stores and purchase as per your needs with great deals and offers.. :p