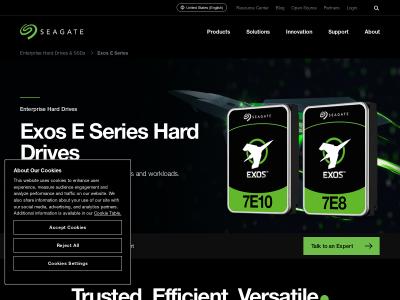 Seagate made the switch to serial-attached SCSI (SAS) drives a few years ago, but have only upgraded to the 6 Gb/s standard (SAS 2.0) within the last year. SAS drives require special controllers that are occasionally built into motherboards, but more often, come in the form of a PCI-Express card in order to achieve 6.0 Gb/s. The Savvio product line is marketed towards enterprise customers, purchasing drives for businesses or applications that require high speed and reliability, usually in the form of a RAID configuration. As such, these are not marketed, or priced, for the average consumer or computer enthusiast. Those willing to dole out the dough will certainly get the bang for their buck, and can expect vast improvements over traditional SCSI interfaces and the original SAS 1.0 standard of 3 Gb/s.

Their latest enterprise SAS drive, The Savvio 10K.4, ups the storage capacity to 450 or 600 GB, and as the name implies, spins at 10,000 RPM, and is equipped with 16 MB of cache. We will be reviewing the 600 GB model, which utilizes three storage platters, like its smaller brother. We tested the drive on a relatively modest consumer setup, but the performance should parallel that found in an enterprise environment with adequate cooling and hardware.

When testing the Savvio 10K.4, we used a PCI-Express controller from LSI, the MegaRAID SAS/SATA Storage Adapter. SAS connections are backwards compatible with SATA hard drives, but can only perform at 3 Gb/s. There tends to be confusion regarding the cross compatibility, so, for the record, SAS hard drives require an SAS controller and cannot under any circumstances connect to a SATA interface. It simply does not work.

Seagate kindly provided three of the drives for review and we tested them in solo and RAID configurations using the CrystalDiskMark 32-Bit benchmarking software.Single Drive Performance

The Savvio 10K.4 performed very well, living up to its impressive specifications. Here are the results from the CDM benchmark:

Read/write rates hover just above 140 MB/s, which is fairly excellent for a Hard Disk based drive. For comparison, a high end SATA drive with a 6Gb/s interface like Western Digital’s VelociRaptor that spins at 10K RPM, achieves 145 MB/s read rate and an 82 MB/s write rate. The Savvio 10K.4 wins points for writing as fast as it reads, at an impressive rate. SSD drives clock in around 250 MB/s and write about 90 MB/s, but of course, have a high cost per GB ratio.RAID Configuration

We tested the drives in three setups, RAID 0, 1, and 5. Read/Write speeds fell short of the stand-alone rates, but are still impressive. Overall, the drives performed quite well. Here are the results:

Seagate’s drive compares favorably to similar drives from their competitors. Toshiba’s MBF2600RC drive shares the same 6 Gb/s interface, RPM, and capacity as the Savvio 10K.4, but costs $100 more. Seek and write times for the Toshiba clock in at 4ms and 4.4ms respectively, while the Savvio averages 3.89ms and 4.54ms. Average latency for each drives is even at 3ms. The differences are minor, but Seagate does well with their relatively low price point.

Seagate has also achieved a remarkable boost in the lifespan of their drive, boasting a mean time before failure (MTBF) of 2 million hours. This is an industry first and 20% greater than any other drive on the market.

Seagate’s Savvio 10K.4 performs very well for a Hard Disk SAS and has managed to nail a competitive price point without compromise. They’ve even managed to increase the life of the drive, solidifying its position as the top choice for a high capacity, RAID worthy SAS.

Reviewer’s Note: Seagate also offers a 450GB version of the Savvio 10K.4, which actually gains speed from the lower capacity, utilizing the same 3-platter setup. The advantage comes from the smaller platter utilization, shortening the distance a magnetic head must travel across the platter. This was not a factor in the 600GB model review.

NIce review but WOW, i was expecting RAID 5 writes to be slower than reads but that is waaaaay slower at 24MB/s

price is higher isn't it?
I could buy a sophisticated SSD disk for that price very easily.

Hay you guys and girls heard about the SSD drives , the diskless drives.
With good speed and without the hard disk noise.