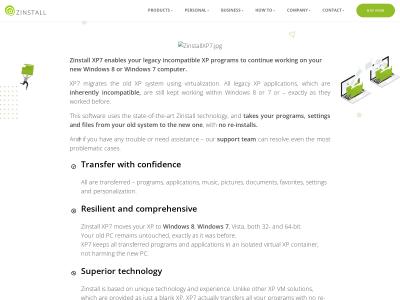 Windows 7 offers heaps of computing-gravy for users that are looking for something sweeter than XP and less bitter than Vista. It has been optimized and overhauled into a truly modern version of Windows. Unfortunately for a lot of users, upgrading from XP is a daunting task if you want to preserve your files, settings, and programs. This is where Zinstall XP7 comes into play. It creates a virtual machine (VM) based on your old XP installation that can be accessed within Windows 7. It gives you a hot-swappable desktop that allows you to experience 7 without going through XP withdrawal. Zinstall XP7 is a useful product that will appeal to a lot of potential upgraders. It is not without its hiccups, however, and should be fully understood before purchased.How It Works

Users have a few options when upgrading to Windows 7 using ZInstall. You can upgrade your existing computer using the same hard drive as XP (known as an in-place migration), you can migrate XP from one hard drive to a Windows 7 drive within the same computer, or you can merge operating systems over a network.

The first scenario utilizes the “windows-old” directory created in the C: drive when upgrading to Windows 7 from XP. ZInstall will use this folder as the basis for its Virtual Machine installation, giving you access to all of the XP settings and applications within.

It is very important to backup your XP installation before proceeding with an in-place migration. If something were to go wrong while upgrading Windows 7, you could potentially lose all of your data and most likely, the ability to use your old XP installation with ZInstall or otherwise.

Rather than mess with an in-place migration, I chose to migrate between two hard drives within the same computer. There are two reasons for this: I wanted to see ZInstall work its magic without any help from Microsoft and I wanted to use hard drives manufactured years apart. Most XP machines are dated and users would benefit from upgrading their equipment before using Windows 7, including the hard drive. I also assume most users would like to keep their working XP drive as insurance in case Windows 7 or ZInstall failed to live up to their needs or expectations.

The functionality of Zinstall XP7 after migrating over a network is similar to transferring between two drives. As long as you are connected to the same workgroup, or connected with an ethernet cable, the process and results are essentially identical.The Setup
The XP drive is a Western Digital WD2000. It is an IDE Ultra ATA100 drive with 200GB, spinning at 7200 RPM. It's running Windows XP 64-Bit, with Service Pack 2 (created for Windows Server 2003 and XP-64). The destination drive with Windows 7 64-Bit is a Western Digital WD800JD with a SATA 3.0Gb/s connection, and 80GB, at 7200 RPM.

Installation
To start, I created a fresh install of XP on the first drive. When I attempted to migrate that installation to my current hard drive through ZInstall, I was warned that there were essential components missing from Windows, thus preventing the process from completing. Although disheartening, it wasn't surprising given the literally untouched state of XP.

Most users will have updated XP to service pack 2 (or 3) by now and would not have to overcome this hurdle. In the case of someone, like myself, who occasionally needs XP for it's compatibility with old software, a fresh install of XP would be a preferable place to start, followed by running Windows Update. The missing components fall in Microsoft's lap, rather than ZInstall, in this case.

Users attempting an in-place migration should heed this warning as well. If they install 7 over XP and run into the same problem, they will be unable to update XP and take advantage of Zinstall. They will be stuck in the unfortunate position of having to manually recover what they can from the Windows-Old folder.

On my second attempt, ZInstall finally played nice with the up-to-date XP. When setting up the hard drive to hard drive migration, ZInstall searches your computer and tries to identify the source and destination hard drives for you. I had four internal drives, an external S-ATA drive, and a 1 GB USB stick plugged in at the time. For some reason, ZInstall suggested that I merge the USB stick and a 1TB storage drive. Obviously, neither suggestion was correct. Select the “Advanced” button towards the bottom of the window when setting up ZInstall, and you can manually pick what drives to use.

What led ZInstall to choose the drives that it did is a mystery. It would seem that ZInstall should be able to identify the proper drives by finding files unique to Windows, but this apparently isn't the case. Novice upgraders might experience a little frustration when presented with this problem, and the solution isn't obvious unless you poke around the interface, looking for a solution. Once the drives were properly selected, the rest of the installation was an automated process. In just under 30 minutes, ZInstall properly copied, configured, and enabled the XP virtual machine within Windows 7. Switching between the native OS and the VM is as easy as right clicking the ZInstall icon in the notification area of the taskbar and choosing “Switch to Old Desktop”. I waited 20 seconds for ZInstall to initialize the VM, then the screen blinked and lit up with the login screen for XP. Success!Using the ZInstall VM I was then able to login in and access the same desktop I had on the old XP drive. I can open all my old applications, and utilize most functions on the native installation of XP. There is nothing limited about the content of the virtual desktop, but it doesn't work flawlessly. This has a lot to do with the fact that XP is running in a VM, and ZInstall isn't able to make up for all of the downsides of virtualization.

This has to do with the fact that there are two operating systems loaded and operating at once. It should go without saying that there will be a performance loss when virtualizing XP within Windows 7. There is less RAM, processing power, and front-side bus bandwidth to go around. You are unable to use non-storage USB devices and unable to access hard drives outside of the virtual XP installation. The latter of which is overcome by right-click on the ZInstall icon in the notification area and clicking “Show New/Old Desktop Files, but again, it isn't really the same experience as using a traditional form of XP.

I also experienced many crashes of explorer.exe (the shell behind Windows) when using the Control Panel in XP. I attempted to use Ctrl.+Alt.+Delete to open the “Run..” dialogue within task manager, but the command triggered within Windows 7, not XP. The easiest way to open it in the virtual XP would be to click “Start”, click “Run”, and then type “taskmgr.exe”. It's possible, but not if explorer crashes. In this case you would have to shutdown the virtual machine and start it up again. There is lots of potential for data loss and frustration for the uninitiated.

Who Should Use Zinstall? ZInstall XP7 does what it claims, and it's only downside is that it is limited by virtualization. This type of product is aimed at users who are looking to upgrade to Windows 7, but don't want to give up their current OS setup. In some ways, it allows them to use their computer much like they could in the past, but they will probably end up using Windows 7 more often after struggling with the performance loss and inflexibility that comes with virtualization.

For power users, ZInstall XP7 is a great tool for overcoming software incompatibility issues with Windows 7. But what it does for $89, minus OS migration, Microsoft's own software, Windows XP Mode, does for free.

In summation, ZInstall XP is a great product for running a virtual machine with your old XP installation, but that's about it. For some, it will make the leap to Windows 7 a less intimidating process, but it comes with its headaches and users should weigh the benefits of ZInstall against buying an external HD for backup and committing to a new operating system.

I used Zinstall to migrate from Windows XP to Windows XP - I don't want to migrate to 7, and I really needed to move all my files & programs from the old computer to the new.

I didn't want to buy an external HD (that will also cost about 90$) and start copying all the files, so Zinstall got the job done for me. Everyday I copy some files gradually to the new computer, and meanwhile I use Zinstall only when I need to access the old programs. Its a great combination for me, I enjoy the speed of the new computer with all my old stuff.

Software does not work for Win7, leaves some application useless, and they refuse to refund the purchase price.