The UK-based Surrey Police Force has long since embraced Internet culture as being a way to help fight crime. It has an online crime reporting tool, active accounts on Facebook and Twitter, as well as a video channel on YouTube. But now it has moved into smartphone territory in order to entice members of the public into identifying suspected criminals by looking at CCTV mugshots using an app called Facewatch. 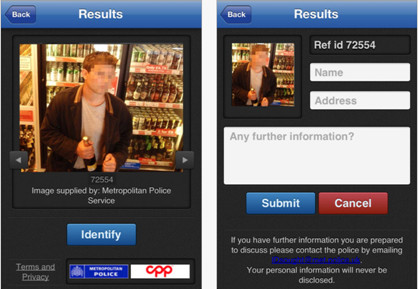 Available for free on the iPhone, Android and BlackBerry platforms as well as on the web, Facewatch lets the would be home-detective input their postcode and a distance radius of between half a mile and five miles before then displaying all the CCTV images 'connected to crimes' within that area. If the user recognises anyone in the images, they can quickly and anonymously send the name and address information to the police from within the app.

Surrey Police is quick to point out that the app is designed to "help identify people caught on camera" who "may be responsible for a crime" but may equally well just be able "to help with an active investigation". The company behind the app, Facewatch Ltd, is equally quick to try and remove itself from any potential legal liability should an entirely innocent member of the public feature on Facewatch and, by association, be wrongly thought of as being a criminal. The following disclaimer appears when the app starts:

"The police are seeking to identify the following individuals in respect of ongoing investigations. The individuals pictured are being sought as both persons of interest and witnesses to crimes. No inference should be drawn that any person pictured is wanted by the police for criminal activity. Facewatch Limited has been provided with the images by the police forces identified with the images and is undertaking this service on behalf of such forces. Facewatch hereby excludes all liability to any person pictured in this App to the fullest extent possible under the laws of England and Wales. All information as to identity is passed directly to the police and is not held by Facewatch."

Surrey Police Detective Inspector, Mark Parry, reckons that the app "works so well because of its simplicity, allowing users to anonymously identify suspects involved in crimes such as shoplifting and anti-social behaviour". While Facewatch Ltd Chairman, Simon Gordon, points out that the app has already had some success after being used by the Metropolitan Police Service in London to identify people who may have been involved in the widely reported rioting there last year. "Results were seen immediately" Gordon says, continuing "we very much hope that this trend will continue in Surrey and all UK Police forces quickly follow in using this free application”.

The Metropolitan Police loaded some 2,880 CCTV images of suspected rioters onto the app, along with around 2,000 pictures of people they were looking for in relation to other offences. Of the rioters, I am led to belive that 1% (29) of the suspects shown have been arrested following the Facewatch trials.

What do you think about this development? Is it a good move to use crowd-sourcing technology of this type to create citizen informants that 'do their bit' in making the streets safer, or is it just another move towards some kind of Big Brother state? Join the DaniWeb conversation and let us know...

People may see this as Big Brother gone wild again but if you've done nothing wrong and have nothing to hide then you shouldn't have a problem. If you've ever been unfortunate enough to have been robbed or been the victem of a crime then you should be more than happy to help catch those responsible, whether it be by helping identify the criminal or just identifying a witness. However I could understand if a lot of people wouldn't use the app because they may know family members or friends that may be commiting crimes and may not want to be responsible for turning them in.

I've been robbed before so obviously welcome this app.

Identify with image, great technology SNIP it may have some captureing distance to identify the emage, if the endroid or iphone have the app then how much its really helpful!

Edited 9 Years Ago by happygeek because: spam link deleted

On one hand it may help. But I fear, if someone identify my as the bad person and while I prove my innocent at court (massmedia point on me as the criminal person). Then after I prove innocent, I would expect, that (by law, if possible) all the massmedia who reported about me would have to compensate me for endagering my private life.

Application is ok, as long there is zero chance, that wrong identification will endanger/affect my life(family) in any way.