Over the last couple of days the online media seems to have gone crazy for the news that the Google Chrome web browser client has overtaken Microsoft Internet Explorer to become the most popular browser on the planet. This based entirely upon the fact that, for a single week, and according to figures from the StatCounter service, Chrome reached a 32.76% share against the 31.94% share enjoyed by Internet Explorer. But does this really mean that Chrome is now the number one client, and should web developers be giving more design love to it than Internet Explorer as a result? 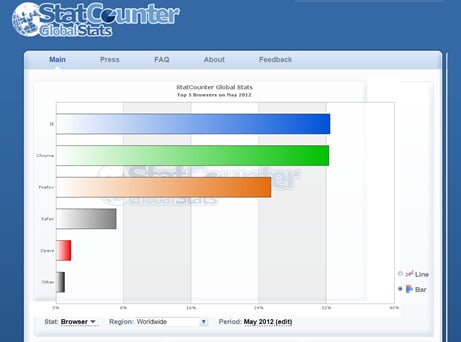 The second question is the easiest to answer: obviously not. Web developers should be continuing to ensure that their sites and services are fully accessible to any user with any of the major web browser clients. To do anything else is madness if they wish to attract the greatest possible amount of site traffic. The figures do, however, serve to lay to rest the long since obsolete notion that as long as websites work with Internet Explorer then everything is OK in the world.

Turning our attention back to the first question, the one asking if Chrome is really the browser client top dog, and things get a little more complicated than the numbers may at first suggest.

There's no denying that Chrome has climbed something of a user-share mountain from this time last year when Internet Explorer continued to rule supreme with around 45% of the market share. Chrome on around 20% was still struggling to catch up with Mozilla Firefox on around 30%. There is no doubting that the glory days of Internet Explorer when it enjoyed more than 80% of the market have long since been over, and Microsoft has had to accept a pretty steady decline in share ever since Firefox first started chipping away at it many years ago. The introduction of Chrome into the mix in September 2008 has hit Internet Explorer and Firefox, taking share away from both browsers.

Considering that StatCounter generates the market share numbers from data collected across a vast 15 billion global web page views per month from more than three million sites with the relevant tracking code installed, you might be forgiven for thinking that it's a no-brainer that Chrome is now King of the Browser Hill. But, as I say, it really isn't as simple as that. For a start, StatCounter is not the only market share analyst player in the game and others, such as the equally well respected NetMarketShare tell a different story. If you believe the NetMarketShare numbers then Internet Explorer still rules the roost with 54% and Chrome (19%) remains behind Firefox (20%).

Even if you just stick to the StatCounter market analysis, the results are pretty varied depending upon which particular market you are looking at. In the US, for example, Internet Explorer sits at the top of the tree with 37% while Chrome is in second on 23% and Firefox third on 22%. Internet Explorer also enjoys a decent lead in Japan, while in Europe as a whole Firefox retains the popular vote with the Microsoft client in third place behind Chrome.

These regional anomalies aside, the StatCounter figures still show Chrome as being ranked number one globally for the whole of last week. So where's the beef? Well some have suggested the small problematical spanner of page prerendering that is thrown into the works makes for unfair comparisons? When a user starts to type a URL into Chrome it will auto-complete the address based upon a calculation as to what is the most likely destination the user wants, and fetch or prerender these pages to save the user time when they hit the enter key. StatCounter has always included these prerendered page views in the market share count, but according to the site it stopped doing so from May 1st. Seeing as Chrome hit the top spot for the week commencing May 14th, one has to assume that the numbers were for share with prerendered pages filtered out.

Where things becomes less clear for me, and many others I have spoken to, is that the 'Chrome is number one' stats that have been much reported by the media relate to just a single week. This media interest in one week of page views is testament to the influence and dominance that Internet Explorer has enjoyed over the years, pretty much ever since it was launched and quickly destroyed the 90% market share of Netscape, leading to much legal battling over the years. But a single week does not a U-turn make. Look at the current monthly StatCounter figures for May and, globally, Internet Explorer still retains the lead. Narrowly, very narrowly indeed in fact to the point of most people being happy to call it a draw. I suspect that the trend for Internet Explorer to be losing share, and Chrome to be gaining, will continue over the coming months. However, I'm not sure that Chrome will inevitably end up as the undisputed global number one without any great argument over the data collection analysis methodology. And I certainly don't think that it has got anywhere near being so just yet. Indeed, it may well be some time before any meaningful gap opens up between the two; if one ever does. The days of 'doing a Netscape' or even 'doing an Internet Explorer' in terms of market dominance are surely over.

Join the DaniWeb conversation by letting us know which web browser client you use and why. If you are a web developer, do these kind of usage statistics matter to you or do you design your pages for any browser?

I personally use chrome for everyday stuff, but when it comes to testing new code on the website i work on, i can't base my tests on global statistics since the site's target users are very specific and, according to my google analytics data, are over 80% ie users.

I have been using Chrome for years as my primary browser. The main reason is its light weight memory usage, the way it handles processes for pages and plugins, and the speed it can load and render a page. IE has improved in v9, but IMHO both Firefox and IE are still too heavy.

As a web developer, I run installs of Chrome, IE, FF, Opera and Safari, and I maintain virtual machines with older versions of each for testing large global projects. It is important to test layouts and scripts on as wide a platform base as possible to ensure consistency and expected performance. Although, as Philippe mentions, it can depend on the target demographic for the project.

From the begnning i always used google and now i use chrome. And i like using it.

but i always use firefox.really its a very and comfortable browser.i like it for it addons.

Still drives me nuts that the title bar is gone.