Amazon: a prime example of how not to retain loyal customers

So this morning I get an email from Amazon which promises to inform me of some important information about my Amazon Prime membership. This is the subscription service which, in return for an annual charge of £49 here in the UK, provides free next day delivery on any item which is flagged as eligible for Prime members. That may sound like a lot, but actually if you do the math properly it's a pretty good money-saving deal for anyone who falls into the 'regular shopper' category and likes the tracked next day delivery option which usually costs an arm and a leg. So what was the important information that Amazon had to tell me? 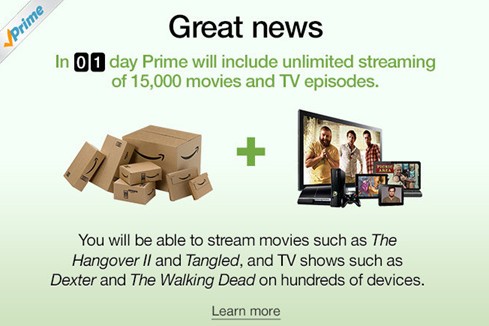 Look, I'm not completely stupid and know that generally speaking such an email is going to announce a price rise wrapped up the promise of some new additions to the service that somehow serve to cushion the blow. The question was, as ever, how much? I was expecting maybe 10% or so to take it up to £49.99 which, just maybe, I would have swallowed and continued to subscribe. I certainly wasn't expecting a 60% rise in Amazon Prime membership costs. Let me just run that past you again in case you missed it: AMAZON PRIME MEMBERSHIP COSTS TO RISE BY 60% WITH IMMEDIATE EFFECT.

Yep, Amazon want to increase my Prime membership fee from £49 to a whopping £79 per year. What possible additions to a guaranteed next day delivery scheme could they make, apart from perhaps items being delivered by <insert your sex symbol of choice here>, to warrant such an increase? Well, maybe I should let Amazon tell you that itself. Here's an extract from my informative email:

Er, pardon me? Care to expand on that Amazon?

"As a valued Prime member you will be able to start streaming videos at no additional cost beginning February 26, 2014 and your Prime annual fee will not change until you renew on June 27, 2014. After that, your membership will continue for the new price of just £79 per year (passing on £41 in annual savings compared to adding a separate streaming membership)."

Wow, there we have it. I'm not being charged extra after all, in fact I'm saving money. Who would have thought it? Certainly not me, or the other folk who have been telling me that they have cancelled their Prime membership renewals as a result of this change. What is actually happening is that Amazon has, for whatever bizarre business reason Dr Mad the Amazon advisor convinced them would be a good move, merged the Prime next day delivery subscription service with the Lovefilm movie streaming subscription service. A natural pairing if ever there was one, and assuming you live in a fantasy world which has no relation to the real one where I am based.

If I had wanted to stream movies via Lovefilm I would have subscribed to the £4.99 per month service. The fact that I didn't should tell Amazon I'm not interested. Simply increasing my automatic subscription renewal amount, by 60%, and making me aware of this b y way of an email that could quite easily be mistaken as spam, is simply not good enough. I have cancelled my Amazon Prime subscription renewal, and emailed Amazon to make sure it knows why. If you are a Prime subscriber, I recommend you check your account details and do likewise if you are not happy about paying so much extra for something you didn't ask for, don't want and will never use.

Lucie Marie:I understand you have been upset by the current changes in Amazon Prime.
Me:Me and many others. So...should I cancel my Prime membership?
Lucie Marie:I have checked on your account and can see that your Amazon Prime will end on Saturday, 27 September 2014.
Me:yup
Lucie Marie:We would like you to better enjoy the new feature for Amazon Prime. In this case, I would request an extension for 3 months.
Me:?
Lucie Marie:This may help you decide whether to continue with Amazon Prime. In case you would still prefer to cancel it after the 3 month of extension, you may set the Auto Renew to "No".
Me:How much will I be charged for the 3 month extension?
Hello?
Lucie Marie:It is for free of any charge.
Me:That's very nice of you. Thank you very much. And thanks for reminding me of the auto-renewal. I won't be renewing.
Lucie Marie:You're welcome.
Me:Thank you for dealing with my issue. Good bye
Lucie Marie:I shall send you an e-mail to confirm if I have requested the 3 month extension.
Pleasure is mine.
Me:Much appreciated
Lucie Marie:Please do have a good day.
Me:You too

The delay when I asked for the cost of the 3 month extension (which I'm still waiting to see) was either because Lucie was checking with a supervisor or she was playing Candy Crush Saga.

I've heard of people being offered a year at the existing membership price in order to 'try it out' and guess the free three monther is another tool in the stop this from looking like a massive fail box. Won't work, of course, as people are not stupid and will simply move away when the freebie period ends. There is plenty of competition out there for regular shoppers when you remove the 'free' next day delivery part of the equation, and much of it works out cheaper than Amazon when you do.

I think Amazon as a company has been going downhill when it comes to listening to it's customers. From charging prime accounts automatically to members that aren't interested to raising the price of membership, they aren't as bright as they might seem.

There are NO subtitle (Closed Caption) options on ANY of the Amazon Prime Instant programmes. I am Hearing Impaired and I HAVE to have them. I won't be reniwing my Prime Account.

Stick with NETFLIX if you want video streaming.