The results from what is claimed to be the most comprehensive global online job trends survey, the 'Fast 50' Q2 2012 report took data from 190,000 online job postings as an indicator of the global online employment economy. Some of the findings are surprising to say the least, such as how the Facebook IPO fiasco has impacted negatively upon employment within the social media sector and why Apple is leaving Android in its dust.

The Facebook IPO 'fizzer' has seen Facebook related jobs fall by 14% in the quarter, and Freelancer.co.uk (the authors of the Fast 50 report) reckon this is entirely down to advertisers and social media experts questioning the effectiveness and return on investment of social media advertising. With Fortune 500 companies either pulling or contemplating pulling big ticket advertising following bad publicity surrounding the Facebook IPO, social media as a whole has suffered. Twitter jobs, for example, dropped by 1.3% and social media jobs across the board surprisingly stalled at 1.1% growth. A Forrester analyst, Nate Elliot, reckons that "companies in industries from consumer electronics to financial services tell us they're no longer sure Facebook is the best place to dedicate their social marketing budget" which must come as a shock to anyone when you consider just how dominant Facebook is within the rapid growth social media market sector. 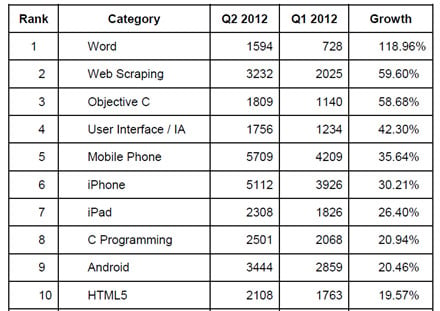 But the stalling of social media job prospects and the decline in Facebook specific jobs are not the only surprise to emerge from this survey. Freelancer.co.uk Chief Executive, Matt Barrie, says that it marks "an inflexion point of the technology landscape" and insists it represents "the changing of the guard across the technology industry".

OK, so it is no great shocker that the move towards mobile marches on and this is reflected within the online jobs market. However, it has long been predicted that Android would overtake Apple iOS before the year end in terms of the rate of release for new apps. This was based upon the seemingly unstoppable rate of growth in Android development jobs when compared to Apple iOS developer jobs, but the trend appears now to have been reversed. Barrie describes it as the tables turning as "Apple iOS accelerates, leaving Android in its dust".

The rate of growth for new iPhone apps has exploded at 30% for the quarter, compared to 20% for Android. The iPad seems to be driving this, with iPad related developer jobs up from a 19% growth rate in the Q1 Fast 50 report to 26% now. It will be interesting to see how the release of iOS 6 as a developer beta and Android Jelly Bean impacts upon the Q3 report figures.

Talking of Google, it has been responsible for sending the Internet marketing industry into something of a panic with no less than four Panda updates and the Penguin effect this quarter. The resulting traffic ranking mayhem has led to much confusion across the sector and this is reflected within the downturn in jobs of 5.6% and the fall of 7.3% in SEO specific jobs. Link building jobs, perhaps unsurprisingly given the ongoing Google updates, were down 8.3% while article rewriting and submission ones tumbled by 9.3%.

On the good news front, developers working within the 'open standards' sector are seeing a huge rise in job opportunities. HTML5 jobs grew by 20% and jQuery ones 17% in the quarter. It's not so bright for Microsoft .NET developers though, jobs were down a massive 39% and ASP jobs down 13% as well.