Revealed: how to fix the Apple iOS 6 map FAIL on your iPhone 5

So, you've either bought the brand new iPhone 5 or have upgraded your existing iPhone to iOS 6 and discovered, like half the Internet it would appear, that the new Apple Maps which have replaced Google Maps are, to be polite, an utter and total stinking FAIL. I'm no Apple hater, in fact quite the opposite as I own and use an iPad 2 and an iPhone 4S on a daily basis. However, I'm not so much of a fanboy that I cannot call it as it is when Apple gets things very wrong indeed. 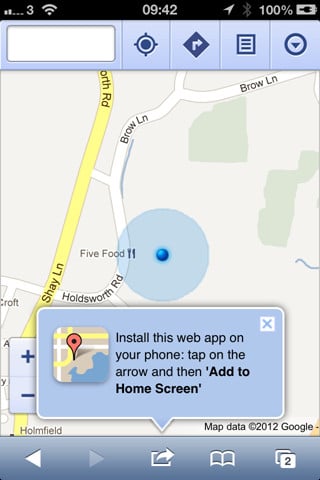 Thankfully, having fallen into the latter category and upgraded my iPhone 4S to iOS 6 (which I actually think is rather splendid apart from the godawful maps fiasco) I have found a very simple method of undoing the damage and getting fully working maps back for the iPhone while I wait for Apple to fix things. But more of that in a moment, first though let's take a look at just what exactly has gone wrong.

The problem with the Apple Maps app can be summed up in one concise phrase: not fit for purpose. It has all the look and feel of a Beta test rushed into production before it is ready, and certainly before it has been properly tested. I mean, what is the sole purpose of a map application? Yep, that's right, showing you where you are and where places you might want to get to are in relation to that. You might be one of the lucky ones who only ever happens to be somewhere that Apple Maps has managed to get right. Given the number of truly incredible omissions and errors being reported online, I imagine that's pretty unlikely though.

Apple Maps, for example, thinks that the flagship Apple Store in Sydney Australia is located in the flagship store of telecom giant Telstra. But that pales into the almost acceptable when you discover that Gothenburg no longer exists in the satellite view of Sweden, the city of Hong Kong is no longer on Hong Kong Island, Paddington railway station (one of the busiest in London) has been erased along with Tokyo station in Japan and Helsinki railway station in Finland is shown as a park, Dublin in Ireland gets a new airport that doesn't exist. I could go on, but I won't as there are just way too many errors to report here.

Somewhat ironically, I use the TomTom satnav app on my iPhone and this continues to work as expected so I am not in danger of getting lost in my travels. I say this is ironic because much of the mapping data for the Apple app was provided by TomTom itself. The Dutch satnav giant has been quick to distance itself from the problems though, insisting that it just provided raw mapping data and how well, or badly, Apple turns this into a working application is nothing to do with them. Replacing a free mapping app with an expensive commercial satnav mapping solution is, frankly, no solution at all for anyone who doesn't already own it.

So what is this simple fix for the Apple mapping fail mentioned at the start of this article?

That, dear reader, is to go back to using Google Maps instead. Now I know what you are thinking, you cannot roll back iOS upgrades (or individual app upgrades for that matter - another Apple fail, but don't get me started on that particular rant) so how can you return to the now banished Google Maps App? Well, you can't as such, but the briefest bit of logical thinking reveals that you can use the Safari browser to access Google Maps on the web, and you can take up the offer that kindly appears when you do so to let it install a Google Maps icon on your iPhone home page so that you can get back to it with a single click next time. You know what, that works for me. At least until the iOS 6 ready version of the Google Maps app, which I understand is 'waiting approval' for App Store release, becomes available. Or should I say, if it ever becomes available. Apple has a bit of a history of delaying or simply refusing the distribution of apps which compete directly with their own brand operating system included ones. Let's just hope that this time it sees sense, and puts the consumer first.

Apple Maps is quite plainly not ready for the big time, and needs to go back to the labs to get properly finished before being considered as suitable for real world use. In the meantime, Apple needs to eat some humble pie and allow Google Maps back to play...

The same works pergectly with Nokis maps, just put m.maps.nokia.com as ashortcut icon and it does the with nsvigation and everythin

"Apple Maps is quite plainly not ready for the big time, and needs to go back to the labs to get properly finished before being considered as suitable for real world use"

I'm not sure you've thought about what it takes to produce a map of the world. Google's Maps got to where they are today only through user feedback, you can't just do it in "the labs". How about doing a comparison of Google Maps from 2005 to Google Maps today? That would be interesting.

I'm not sure that Apple realised what it takes either, and that's the problem. Perhaps Apple should have stuck with Google Maps, the tried and tested and working app, rather than replacing it with one that is not working?

The thing about Google Maps from 2005 is that it's now seven years later and that's actually what counts. Google Maps today works pretty well, so why remove it and replace with an Apple proprietary product that doesn't?

Also, I appreciate that using Google Maps via Safari doesn't give you all the functionality of the Google Maps app. However, my argument is that a less functional map app that knows where stuff actually is has to be better than a map app with bells and whistles but no idea where stuff is. Am I wrong?

So far I have had really good luck with apple maps. It will take some time for them to get all the issues fixed for everyone, not unlike google maps when it first released. I haven't used google maps I an a very long time because it is so dated and you have to zoom in all the time to see the next street. If you need a good alternative I highly recommend the mapquest app, it is free and it is turn by turn voice navigated. I'm shocked people actually miss google maps... There are so many better apps that easily beat google maps.

in general I like the idea of Apple going on their own to see if they can build and deliver "mapping value" in a different/better way that Google didn't think of....but I suspect most map users just want the most accurate/most informative mapping solution which to me would require a JOINT effort between large user-bases (Apple, Google, Mobile telecoms, etc.) that all could tap into. Maybe in 5-10 years after Apple has run its course..

How bout just get Mapquest for free. Turn by turn voice directions. Done.

Edited 9 Years Ago by Jeffb334

Well as far as why Apple has switched from Google maps, we don't know what the discussions between Google and Apple were about this. One possibility is that Google was not allowing Apple to add new features that are present in the Android version of Google maps, such as the 3D view, vector graphics instead of bitmap tiles, turn-by-turn directions, etc.

Apple may well have felt that its maps were falling behind when compared to those on Android, and without Google's cooperation what choice did it have but to start its own maps project? Maybe Google was asking too high a price for these features, maybe Apple just wanted to have the maps (no doubt a key feature of mobile devices) entirely under its control, rather than be beholden to its biggest competitor.

It may be unrelated, but you'll note that the Apple's YouTube app also disappeared from iOS 6, but in this case Google had the replacement app ready for download.

So long as Apple signs iOS 5.1.1 firmware for your phone, you CAN roll back to the old iOS. I did just that on Thursday. You do need iTunes and the old firmware, which is easily available from Apple. However, if Apple stops signing the old firmware (and it might have already), then you are out of luck, unless you had the good sense to back up the "blobs" for your device before upgrading to iOS 6.

Apple Maps have been a disaster and i hope apple quickly sort it out.

Safari Google Maps is NO solution at all. And Apple Maps , at the present, are HOPELESS! Please take another bite from your apple, APPLE and let's "git-er-done!"

Pfff... Apple maps workign just fine. People speaking about like it's not work totally. It got few mistakes and that's it. Google maps is way worse. You always have to load-load-load and it's not working good enought in areas with no 3G. And on EDGE - Apple maps works just fine, it need like 4-5 times less bandwitch and still loooks better. And for those few mistakes - they allready fixed, and for new ones - just report.

So what is this simple fix for the Apple mapping fail mentioned at the start of this article?

This small mix-up cost the Apple company over millions of dollars and the work around is using google map. That is really sad. I mean I go to Apple stores to check out the gadgets I feel that Apple Map would be easier to used and understand.