Right wing people who see this as a problem are not suggesting that we let any person die to keep the books balanced. We are suggesting that businesses are going to be the first to die, and that will have long term consequences on the economy.

They are suggesting exactly that. And not just suggesting - it has been explicitly stated. They want people to go back to work to keep the economy going. This will cause even more spreading and cost the system even more long term. I realize that there is no solution that does not result in some businesses closing and some loss of life. But Trump's solution which he has stated as "a miracle will happen and it will all go away" is just insane.

A bill has been introduced into the Senate that provides relief to businesses, specifically excluding any business owned or operated by any member of Congress, the Senate, the White House, or by any family members of the same bodies. Any bets on whether the Senate passes it?

The problem is that it provides relief entirely in the form of small business loans. That means that once this crisis is over, small businesses will be under insurmountable debt. Long term, they'll be repaying this debt by cutting their costs, cutting employee hours, laying off people, etc.

A lot of business owners, myself being one of them, would rather shutter a business than take on debt. On the other hand, this will work for the minority of businesses that are not working off of low margins. If operating costs are low, but sales are normally super high, then they could take on the debt to pay operating costs now, and pay it off once they start bringing in sales again. The problem is these are the exact same companies that already have stockpiles of cash in reserves, and don't need a loan in the first place. It's the small businesses that are operating on thin margins that the loan model won't work for, but they're the ones that are in trouble.

So you want the government to just give you money? Unless you can prove you don't need it that would be a handout (socialism). Unless you were a super-rich corporation, in which case that would be a stimulus instead of a handout. Please understand this is sarcasm. I really want you to get some financial help getting through this. I believe that a Democrat controlled Congress will have a difficult time getting a proper relief bill through the GOP controlled Senate. All the GOP has to do is attach something like a $500 billion slush fund to the bill and then blame the do-nothing Democrats when it fails to pass. And that's all Trump really wants - someone else to lay the blame on.

Edited 8 Months Ago by Reverend Jim

I don't know what the solution is. I was simply pointing out what the right is fighting for that the left isn't necessarily seeing. In my opinion, just giving handouts to out-of-work people in the short term, without figuring out how to keep closed businesses afloat while they wait out the storm, isn't going to solve the economic crisis ahead. I think the left is being short sighted by not acknowledging that businesses need to be taken care of. I don't have the slightest clue how to go about giving small business owners like myself what we need.

I would also like to add that my argument here is all entirely hypothetical. While it's true that my coworking space was forced to close and I am still being forced to pay overhead and utilities for it despite taking in no income, the other half of it is that I still do have income from DaniWeb. In addition, my fiance is a salaried Apple employee who, not only has been working from home, but he just got a bonus yesterday.

However, it's true that my mom's sole source of income is her bowling alley, which she was forced to close. It employees 50+ people. My grandma's sole source of income is leasing commercial real estate. Nearly all of her tenants were forced to close, and some have already told her they are going to refuse to pay rent on the 1st of the month. You can't exactly threaten to evict them. The courts are all closed.

My grandma and my mom, who both currently have no source of income, but do have savings, are currently isolating in an extended stay hotel down the block from my apartment. They were initially scheduled to leave about a week after my egg retrieval surgery, but now they're stuck here. New York's pandemic is much worse right now, and my mom doesn't exactly have to rush home to tend to the bowling alley. Also, they don't feel comfortable flying right now. So, for as long as they can, they are going to stay near me while the world goes crazy.

Edited 8 Months Ago by Dani

I admit I know next to nothing about how the economy works. But it seems to me that a business has different types of costs. Let's take the bowling alley. The costs are

Our relief program here in Canada guarantees everyone $2000 per month for the next four months so if the owner has to lay off all staff they would still be getting money for necessities (as would the owner). If the government legislated an amnesty on mortgages/leases then that would eliminate the second expense. Utilities could be a problem but that could be taken care of by

But what about the businesses that need the money from the mortgages/leases not being paid? Those payments are based on market value which does not reflect the actual value. What damage would be caused to a bank if it stopped getting mortgage payments for some months? Are they actually out any money? The money is still owed. The debt does not disappear. If your friend owes you $20 and says "I can't pay you this month but I can pay you next month", are you really that hard done by? As long as you have money for your own needs what actual harm is done?

That leaves taxes. If the bowling alley goes belly up then the government gets no taxes. They coud seize the building for taxes owed but what good does that do? Might just as well declare a tax holiday for businesses that are forced to close.

Again, as long as everyone who needs it gets money for necessities how does the economy really suffer?

And that's all Trump really wants - someone else to lay the blame on.

In case there are any doubts about this, in a tweet this afternoon your liar in chief said

The LameStream Media is the dominant force in trying to get me to keep our Country closed as long as possible in the hope that it will be detrimental to my election success. The real people want to get back to work ASAP. We will be stronger than ever before!

While the CDC has missed a key item in controlling the spread which folk have written about, be sure to read
https://www.cdc.gov/coronavirus/2019-ncov/specific-groups/high-risk-complications/older-adults.html

Even if you take the lowest % values offered, we should be ready for this. I hesitate to write what those preparations are but I will talk with family as if it's their or my last days. (Yikes!)

Unfortunately happygeek’s mom has coronavirus and is in quarantine in her nursing home, which is under lockdown.

That's unfortunate. Please pass on my best wishes if you should happen to be talking.

Sorry, I realized after I posted that it was incorrect information. happygeek's mom is in a hospital working on her recovery. It's someone else I know whose mom is sequestered in a nursing home.

In Lancaster, California, a 17-year-old has died after being turned away from one facility because he lacked health insurance.

Best health care system in the world. As long as you are rich. Get ready to see a lot more of this. The Canadian health system is likely going to be overwhelmed by this as well but at least nobody will be told "I'm sorry but we can't treat you unless you can pay."

Can anyone explain to me how suspending EPA regulations is in any way an appropriate thing to do at any time, let alone during a pandemic?

There's a flood of news and events that no one can keep up. You noted the EPA.

How about supension of habeas corpus? Link and remember there are many. https://www.politico.com/news/2020/03/21/doj-coronavirus-emergency-powers-140023

Why is such power needed? It's not.

From someone that works in a hospital.

And as for that $500 billion slush fund that Congress will oversee (as laid down in the bill passed by Congress and the Senate)? Trump basically said f**k you - I'll decide where the money goes and I'm not going to tell you where that is.

According to the FCC Regulations:

So how is it, exactly, that Fox "News" is allowed to continiue broadcasting, especially with all the false information they keep spouting about Covid-19?

If you want to see a brilliant and effective Covid-19 public service ad then check out this video. It gets the point across about social distancing in a way that makes immediate sense. Whoever created this deserves a Clio Award.

Edited 7 Months Ago by Reverend Jim

Dani commented: Yeah, I heard about that as well. +0

GOP wants to shield companies that force their employees back to work from liability if they get Covid-19 as a result.

A shipment of face masks finally showed up. Here's a picture of the side panel. 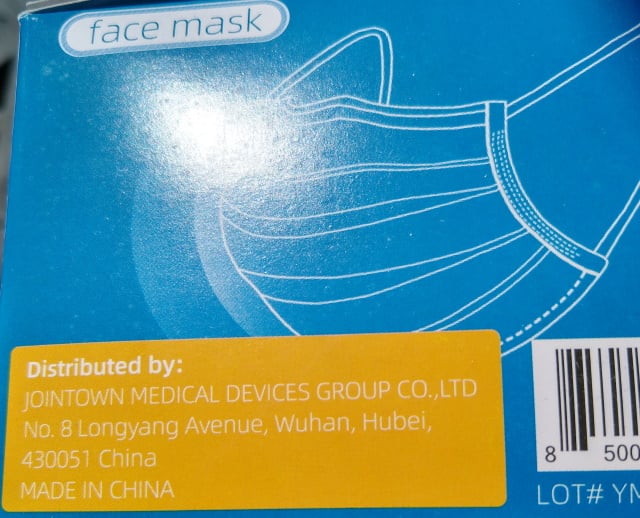 Made in Wuhan, China.

Hmm, seems too much like the Simpsons but it's not a juicer. https://www.youtube.com/watch?v=hqCVB0tOSVQ

Canada addresses the N95 shortage by autoclaving masks. If you are in the medical community you know what that device is.
More story at https://www.cbc.ca/news/canada/manitoba/manitoba-researchers-answer-shortage-n95-masks-1.5518226

Some US hospitals have had PPE shipped in grocery trucks (smuggled) in order to prevent shipments being seized by the FBI or DHS.

Trump is leaving it to the governors to decide when to re-open things, but he has stated he wants things to open up sooner rather than later.

Trump is pissed at New York for keeping things locked down (he is encouraging protests).

Trump is pissed at Georgia for wanting to re-open.

But if blue states get sicker their economies will collapse faster.

Blue (have) states fund most red (have not) states through federal taxes.

If blue states can't pay federal taxes because their economies have collapsed then red states suffer.

Nothing makes sense any more. Maybe that movie quote was right. Some people just want to watch the world burn.

Think of it as evolution in action.

These groups of people are defying the stay-at-home directives:

Basically, people who are completely out of touch with reality. These people are going to increase the spread of Covid-19. Fortunately, they appear to have minimal contact with those of us who know that a fact is something that still exists even when you don't believe it.

I just hope they don't take too many of the rest of us down with them.

Edited 6 Months Ago by Reverend Jim

Is this the US standard for testing? Must be.

In a recent interview regarding Covid-19, Mike Pompeo stated both that

Does that clear things up?

rproffitt commented: Thank you for my daily briefing. +0

Trump tours Honeywell plant in Arizona maskless while the sound system blares out "Live and Let Die". A cease and desist order from Paul McCartney is likely forthcoming.

rproffitt commented: 'We've got a mad captain sailing this boat' - Paul McCartney +0
Be a part of the DaniWeb community

Reach out to all the awesome people in our tech community by starting your own topic. We equally welcome both specific questions as well as open-ended discussions.