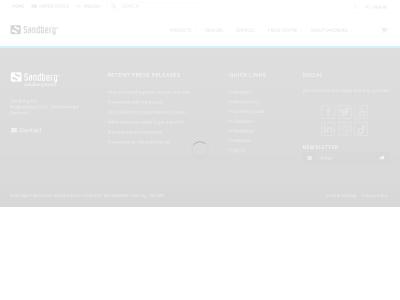 http://www.sandberg.it/
Price
Â£32.99
Pros
Powerful, pocketable, eco-friendly, well designed and effective.
Cons
A tad expensive
Summary
Solar has come a long way in recent years, and charging devices that actually work are no longer ten times heavier and larger than the gadget they are meant to be powering. The Solar PowerBank 2000 being a great example that hits all the right buttons: small, light, powerful and efficient.
Rating

The PowerBank 2000 is the latest in a long line of solar-powered chargers from Sandberg. It's far from being the most powerful backup battery for your smartphone (and yes it will charge Droids as well as iPhones, but as I'm an iPhone user I can only talk about my experiences with that) but it is one of the smallest and lightest. Not that the specs are lightweight per se, with the name giving away the fact that there's 2000mAh worth of capacity in the thing. Producing 1000mA output, the SolarBank will happily charge up my iPhone if I'm away from home and away from another power supply. Although I was told it wouldn't charge the rather more power-hungry iPad that also resides in my manbag, truth be told it did actually manage to power it back from 90% to a 100% charge in just a matter of minutes. I wouldn't rely upon it as an iPad backup battery to be fair, but in case of emergency it may just be enough to get you access to your tablet in order to do what needs doing! 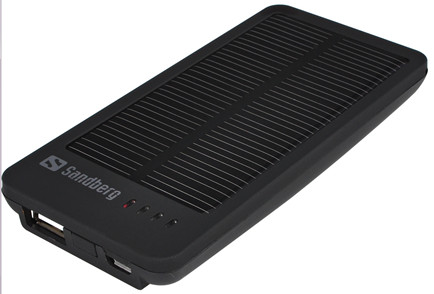 However, as a more eco-friendly alternative to traditional portable battery backups the SolarBank ticks all the right boxes except one for me. So I'll start with the one that remains un-ticked: price. At £32.99 this is not a cheap way of ensuring your iPhone never runs out of juice. Especially when you look at the marketplace out there dealing in devices which will let you drive your smartphone using AA batteries in an emergency and for just the price of a pint of beer or two. Although it would be nicer if it were half the price, I guess that's missing the point a little. This is for people who want to harness the power of the sun, and do just a little bit in terms of lessening the environmental impact of disposable battery usage.

So, on to the plus points then. If the devil is in the detail then this is one evil gadget, and that's good news as far as I am concerned. Let's start with the size. This thing is pretty much the same size as my iPhone, measuring up at 11cm x 5.4cm x 1.2cm and weighing just 79g. It's certainly no biggie keeping it in your pocket or bag, that's for sure. Talking of which, another great design touch is the positioning of the on/off toggle switch that makes it very hard indeed to accidentally turn it on when in said pocket or bag.

Where was I, oh yes. With a capacity, as stated, of 2000 mAh along with an output voltage of 5v and 1000mA, it's more than capable of keeping recharging your iPhone when needed. The MonoSolar panel, which appears sturdy and well protected from damage, is a 5.5v/100mA unit that takes up pretty much the entire front real estate of the device. Using just the power of the sun, or even artificial light it should be noted, the SolarBank took a whole day (24 hours) to be fully charged from flat. If you charge it up by USB, then you are looking at about 4 hours but once again missing the point of having a solar charger in the first place.

What else is there to say? Nothing really, other than I can boast that my iPhone runs off solar power. Well, some of the time at least...

This thing is pretty much the same size as my iPhone, measuring up at 11cm x 5.4cm x 1.2cm and weighing just 79g

I notice that on the website. It's the same size as a iPhone. It's like carrying 2 iPhones. I feel this is a good product if someone is on a road trip but carrying daily it a bit too much. Having a wallet and phone and keys is enough in my pocket.

Hey LastMitch
For everyday use, you should look at these items instead:
https://www.sandberg.it/search.aspx?query=Powerbar+2200
More handy, but no solar panels. :-)