How to totally juice up your iPad and iPhone on the move, simultaneously!

http://www.mophie.com
Price
$99.95
Pros
Looks fantastic, charges both iPhone and iPad at same time, provides much needed additional runtime for both without the need of a mains charger
Cons
Size and weight may put some people off, not cheap
Summary
For the power-hungry iPhone and iPad user on the go, the Mophie Juice Pack Powerstation Duo provides simultaneous fast charging of both devices like no other. The sheer power of this beast, at 6,000 mAh, is not to be sniffed at. Nor, indeed, is the sheer quality of the build and attractiveness of the design. As portable battery chargers go, the Powerstation Duo truly has no equal. If it was a little cheaper, and a little smaller, this would have been a 10/10 product with no hesitation at all.
Rating

When I hear the word 'powerstation' I immediately conjure up images of either a mega-screen laptop or some seriously beefy server hardware. Mophie, however, likes to think smaller. Much smaller, apart from when it comes to naming products that is. The Mophie Juice Pack Powerstation Duo is one heck of a mouthful for such a small device, measuring a fairly diminutive 2.5" x 4.25" x 0.75" and weighing in at less than 200g. The 'Duo' is big brother to the even smaller 'Mini' (costing $59.95) which is a tiddly 1.75" x 3.5" x 0.5" and weighs just 82g. Don't let the size thing fool you though, both these Mophie Powerstation devices pack a big punch in terms of power.

A fully-charged 'Mini' carries enough battery juice to charge your iPhone one and a half times over, which is impressive enough in and of itself. However, if you really wanted a bit of extra uptime for your iPhone all the time then perhaps one of the many battery cases would be a better bet. Overall they tend to add less weight to your pocket, and the all-in-one nature of such a case is a better fit with the computing mobility concept of a smartphone. Mophie itself has a range of such battery cases for the iPhone, which come highly recommended.

So why then, you might be wondering, am I bothering to review the even bigger, even heavier, even less 'mobile' Powerstation Duo? Because it fills a gap in the market that is not exactly niche anymore: those people, like me, who have both an iPad and an iPhone. With a 6,000 mAh capacity, this portable power pack can very nearly fully charge my iPad 2 (which has 6,600 mAh) or recharge my iPhone three times from totally flat out. The really neat and really useful thing about the 'Duo' which gives it the name, is that it can provide power to both the iPad and the iPhone simultaneously. If you have an iPad 3, I should point out, then you won't get anywhere near a full charge cycle out of the Powerstation Duo as the iPad has 11,560 mAh and so you are looking at something more like half a charge.

It's this ability to extend mobile charging to the iPad that appeals to me, as someone who often finds himself away from a mains power supply yet needing to do some power hungry work (such as watch videos or play games) on the tablet. OK, so when I say 'need' I mean 'want' but the principle is the same. There are plenty of occasions where you leave home with a fully charged iPhone and iPad, have a full day of travel and work ahead of you but hang back from doing everything you might want to in fear of running the battery levels down too far. This is especially true of the iPad, and the Powerstation Duo simply removes that fear from the equation. I just plug both devices into the thing (it has two USB sockets) and let it charge them while I use them. I can see at a glance when either falls below the 100% charge, and when the Powerstation Duo itself is running low of reserves.

A button on the side of the elegantly designed Duo, which looks for all intents and purposes just part of the stainless steel band that surrounds the thing, enables a one touch view of the remaining battery capacity. Press it and a row of previously hidden green lights illuminate on the black soft touch front surface of the Powerstation. 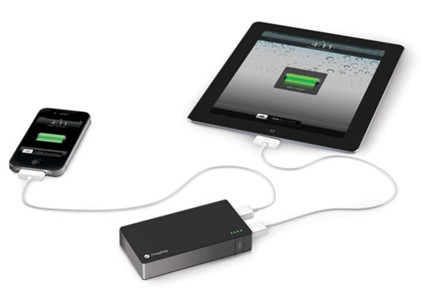 In case you wondered, the Powerstation also has built-in overcharge protection and short circuit protection, so you don't have to worry about any potential damage to your valuable smartphones and tablet devices. Which brings me nicely to the fact that the Powerstation isn't just for iPhones and iPads, it will power pretty much any device which draws power from a USB connection. The Duo is capable of switching between a 500 mAh, 1A and 2.1A charge which covers most everything you can throw at it to be honest. I leave the thing plugged in to a spare USB socket on my desktop monitor so that it is fully charged all the time, and then just grab it and go when I leave the office.

On the downside, there is no getting away from the fact that this is a relatively chunky lump of 200g weight to carry around as well as an iPhone and iPad, albeit a very sexy geek one. However, that said, if you are carrying both these devices then I imagine, like me, you also have some sort of bag into which they go. I have spent the last week living with the Powerstation Duo and can honestly say that I really haven't noticed the additional weight of it in my 'manbag' but I certainly have noticed the additional runtime I am getting on the iPad in particular.

As someone who travels cattle class on airplanes and trains, and uses buses and coaches, I am used to not having the luxury of a mains socket in transit. Now that I have the Mophie Juice Pack Powerstation Duo, it matters not: I can do most anything I like with my iPad and iPhone, safe in the knowledge that I Have The Power... 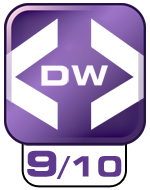 Very interesting.I didn't knew about this.THanks a lot for sharing it.