The full version of Windows 10 is expected to be released around the end of July. Microsoft also have confirmed that Windows 10 will be the last OS from the company, as they plan to rollout incremental updates similar to what Apple do with their Mac OS X.

Windows 10 will be the last OS from the company

I think they are only saying that because they know that every other release is a God-awful mess. And the messes just kept getting worse.

You might want to have a gander at this article.

Windows 10 will release by late this year, but no fixed date is given by Microsoft. We expect in October most likely as seeing previous Windows release dates

I don't like the latest release. You R click on taskbar and if you go to settings to change how the notification items are displayed it gives you a whole lot of other changes that you have to muck through to find it. Plus on top of that they put "Taskbar Notifications" in the Control Panel. I would have liked it if they left it as it were, and left the settings just in the control panel. Now, if they wanted to create a Notification area in the control panel ALONG with the changes to the notification and task bar when you right click on it, that would be fine. But, to throw up all that is a bit irritating.

Still does not find my WinFast 2000 Expert card (TV and FM radio program hardware sits in a PCI slot) in my computer even though I have Vista drivers for it that I downloaded.

At work when my work computer is running XP (as in now) If I go to "Networks" or even to map a drive from my C: My Computer the XP desktop finds ALL of the computers on our network as they are all assigned static IP addresses (except a few laptops). This is a real issue since our Quickbooks resides on an XP computer and running Quick Books 2012 in XP it is easy to find it. Not easy at all, nearly impossible in Windows 10. I can't map computers running XP operating system in my Windows 10. probably the dual ip address thing But when I am home I can "Map" any of the computer's drives/folders that are shared running XP PRO. They only have the single IP address. So, Microsoft should look at the "broken" network issues with their latest builds.

Edited 4 Years Ago by AKsarben

Microsoft has released the minimum required hardware for Windows 10. The official Microsoft release date is July 29.

yay for me luckily I get the free version

Unfortunately, for the free version I have to give up all control as to when updates are downloaded/applied. That just doesn't work for me because from mid May to mid September I am at the cottage where I pay extra for exceeding my bandwidth cap. If I go too much over the cap my service is automatically canceled. If I want the extra control I have to go Windows 10 Pro.

10134 is now leaked this morning: https://mega.co.nz/#!k8IRgYKD!PTQBT60g9NwRMxMpTMTEoKE0ZfknXTvpSQMSsL9hZ4A

My wife and I have Windows 8.1 PRO so do we get to upgrade to the Windows 10 Pro? Actually, using Classic Shell, I really like Windows 8.1 PRO. I long ago moved "MY Documents" from it's normal place of Documents and Settings, etc etc to my "E:\My Documents" so any changes made to my pictures, Adobe, Word, Excel, and so on are all found there. Since I dual boot, (writing this in Windows XP PRO at the moment) Things I changed while in 8.1 are written or saved to the same documents and folders that are in Windows XP. So I really never have to screw around with trying to save documents, and files and re-loading them after installing 8.1 It's all right there. Changes or new files are automatically put in that folder, while in XP vice-a-versa while in 8.1

I even found a place that has a version of Outlook Express www.runasxp.com and with a little registry management and massage, I have the different email folders, aka "Identities" synched between the two since all my email data base folders reside on another hard drive "G" and within a folder called "Outlook Express" I have folders for each "identity" which contain all the .dbx files, etc. So any email I download in XP will still be there when in 8.1.

There are a few things that Windows 8.1 PRO just won't run or run right. For that I can alwasy just boot back into XP and 'Voila.

In the beginning, in Windows 10 they had where I could right click on the task bar and go to the Notifications Icons area and customize what I wanted to be shown there. Then, in the later builds they made it a bit more confusing. I now have to get to it better by going to the Control Panel and finding Notification Icons in there. With Classic Shell (works in 10 as well) it is really not too much of deal, but liked the way I could quickly just change it in the taskbar settings.

One of the first things, after installing Classic Shell in both 8.1 PRO and Windows 10 preveiw, that I "installed" was my Clipboard Viewer" program, called Clip Clear. I put it in the "startup" folder and it starts with Windows and has an icon in the notification area that is green with line, like a clip board when nothing is saved into the clipboard (such as with copy/paste operations) If I see an X in there, I know I have something saved and if it is a large picture of document, that can occupy quite a bit of RAM space. Just clicking that notification icon will clear the Clipboard of what I had in there freeing up memory.

You MUST change the way that Windows 8.1 and 10 controls the "power" in the settings or you are going to have issues. Change the POWER setting so that it does not have "Quick Startup" checked. What it does effectively, is to make a sort of cache of a sorts on the hard drive for faster statup when you completely shut down. Not too much of an issues on a warm boot. The OS Caches info in your most recent saved stuff and makes it load a little faster that way. Problem is if you saved work in 8.1 to a drive and folder, and then boot into XP or into 8.1 your files won't be there when you look for them. On top of that it can cause file corruptions. So I just uncheck the box of the Fast Startup and it no longer has issues with corrupted files and folders if a complete shut down is done. Just passing that along.

I dunno because yes Microsoft lets you update to 10 for free so yes you get it for free but I dunno if its the Pro or Home Version?

yes Microsoft lets you update to 10 for free

Windows 10 is no longer getting released on the 29th for a large amount of people.

Make sure you disable all the things that would violate your privacy.

This article has a slate of benchmark results for Windows 7, 8 and 10. I really don't see a significant enough difference to warrant upgrading.

i think you can go to microsoft official website for more information.

On Sunday, Microsoft started pushing this. Note the complete lack of a button tht sys "Not now, Thanks". Yes, you can click in the X box but it's just another example of "We know better than you do what you want." I'm sure that Microsoft will, in a few days, issue another apology-that-is-not-an-apology along the lines of "that message was issued in error", just like the "apology" when the Windows 10 upgrade was "accidentally" selected by default even though it was in the optional updates list. 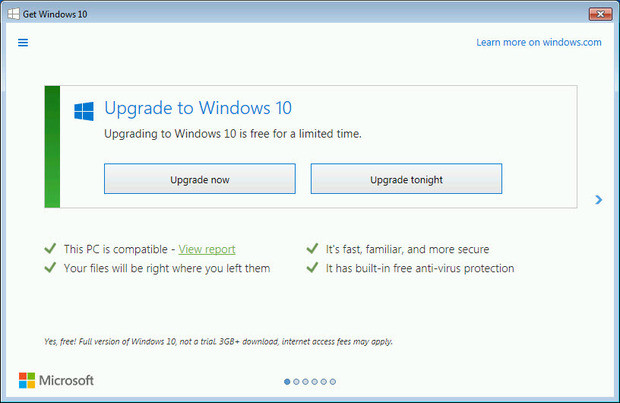 Running Windows 10 on this computer at work. Not my choice. I'd rather have 8.1 ! Don't do it! It works, but there are so many "gotcha's " as of now. For instance, if I click on My Computer (I renamed it that) which is a shortcut to Windows Explorer, and go into some folders. If I close the last folder "X" many times it just pops back up again and I close it again. Next folder.... - close "X" and it pops back up again. I have even had it skip one level and completely close back down to the listing in My Computer drives. 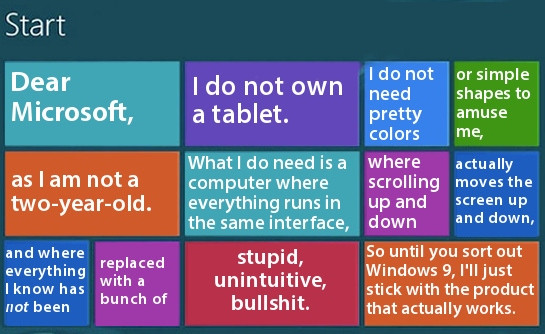 I prefer Classic Shell that at least makes it look and feel like XP.

Insider Hub is back in 11082 just to let everyone know.

Would you like to see this question answered quickly?
$ 5 /mo
Get DaniWeb Premium