Videolan.org has a section in their forums for "VLC media player Feature Requests". I have been using VLC for many years and, other than being a tad light on documentation, I find it pretty damn awesome. But there is one small thing that always bothered me. If you are watching a video in a window and you manually resize that window (other than by using the alt-# hotkeys to toggle between preset zoom factors) you will likely end up with a window that has black borders on either the top/bottom, or sides.

These borders serve no purpose other than to waste precious desktop space so after resizing I carefully adjust one edge to remove the offending borders. This is easily done, but a waste of my (albeit minimal) time and effort. So I put in a feature request that on a resize (in non-full screen), VLC should automatically strip the black borders.

Let me be absolutely clear. I am not asking VLC to remove black borders that are encoded as part of some videos.

Such a simple request resulted in multiple misunderstandings as to what I was asking, multiple complaints that what I wanted would affect the aspect ratio (in spite of my mentioning several times that aspect ratio should ALWAYS be preserved), and some discussion of something called the "principles of least surprise" which the responder says demands that the app act the same in full screen or windowed mode. In other words, if the video, in full screen mode, has a black border then it should also have one in windowed mode.

While I am not (yet) at the point where I am questioning my sanity, I would like some non-involved feedback as to whether there is any valid reason why you might want black borders on the top/bottom, or sides of a windowed video.

Incidentally, my previous media player was BSPlayer (free) which DID support a variable zoom in/out via the scroll wheel, and DID remove unused space at the edges.

Answered by rproffitt 2,279 in a post from 3 Weeks Ago

Did you play around with interactive zoom? https://www.digitional.com/how-to-enable-interactive-zoom-in-vlc-player/ for example.

I went down the rabbit hole. Sorry.

Besides that there is some lock and unlock on aspect ratio.

Did you play around with interactive zoom? https://www.digitional.com/how-to-enable-interactive-zoom-in-vlc-player/ for example.

Might have to work the Crop too: See https://i.stack.imgur.com/REzY8.png

Edited 3 Weeks Ago by rproffitt

I had not seen that. But that's not what I was asking either. I'm not interested in zooming into a portion of the video. I just want to make the window larger or smaller. As I said, when playing a video in BSPlayer in windowed mode, turning the scroll wheel, depending on the direction, makes the video window larger or smaller in increments determined by your mouse settings. Many other applications use CTRL+SCROLL to accomplish this same act, so many that it could almost be considered a de facto standard.

Again, I ask, is there any valid reason to include non-functional black borders, and is it unreasonable to request that they be automatically removed?

I went down the rabbit hole. Sorry.

Besides that there is some lock and unlock on aspect ratio.

The fit on resize option just guarantees that the entire video is displayed. It adds black borders as padding.

If you select "Maintain Aspect Ratio" then VLC adds the black borders. If you unselect it then the video is distorted. The last post from a developer consisted of

Most people including myself don't want their video cropped or distorted when the aspect ratio of the window does not match that of the source video. Would you rather fluorescent pink bars? AFAIK, there are only two commonly implemented solutions to this: black bars, or (mostly when showing portrait recordings on landscape monitors) blurred content.

You can't just remove pixels from the window.

It's hard to believe that after repeatedly stating I want to

the developer still thinks that what I want will result in cropping or distortion. I can't imagine that he is deliberately trolling me. I also can't believe that he is so remarkably dense as to not get the point. I finally ended up copying two images to imgur and posting a link. The images are: 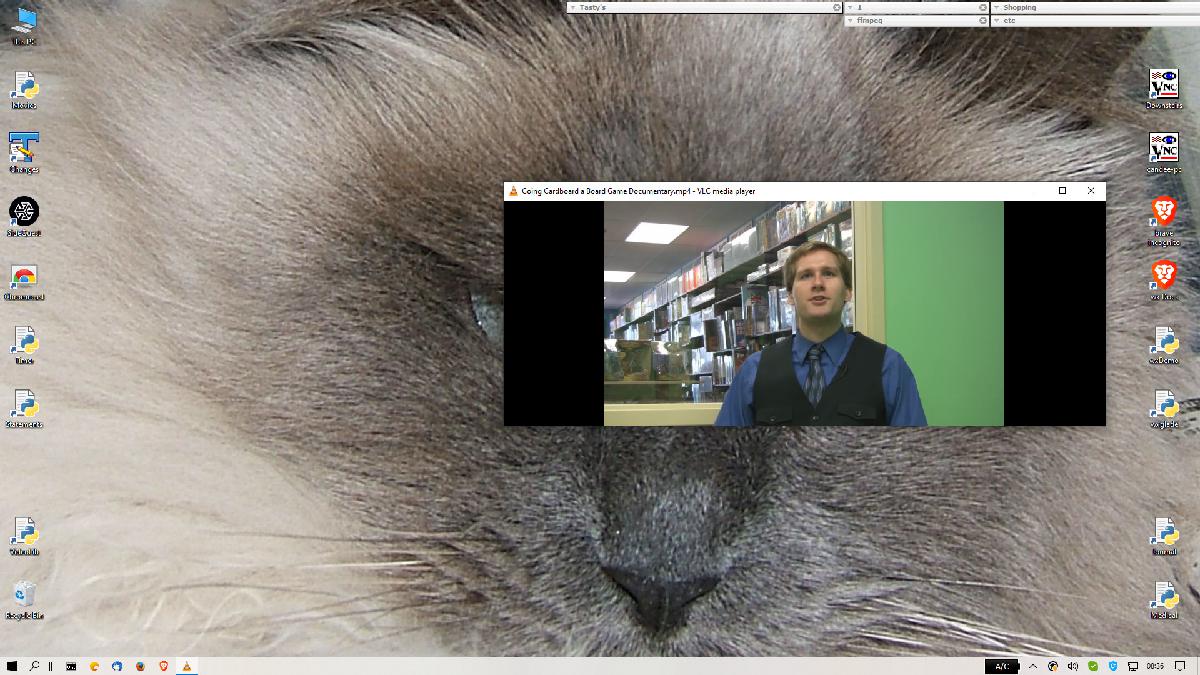 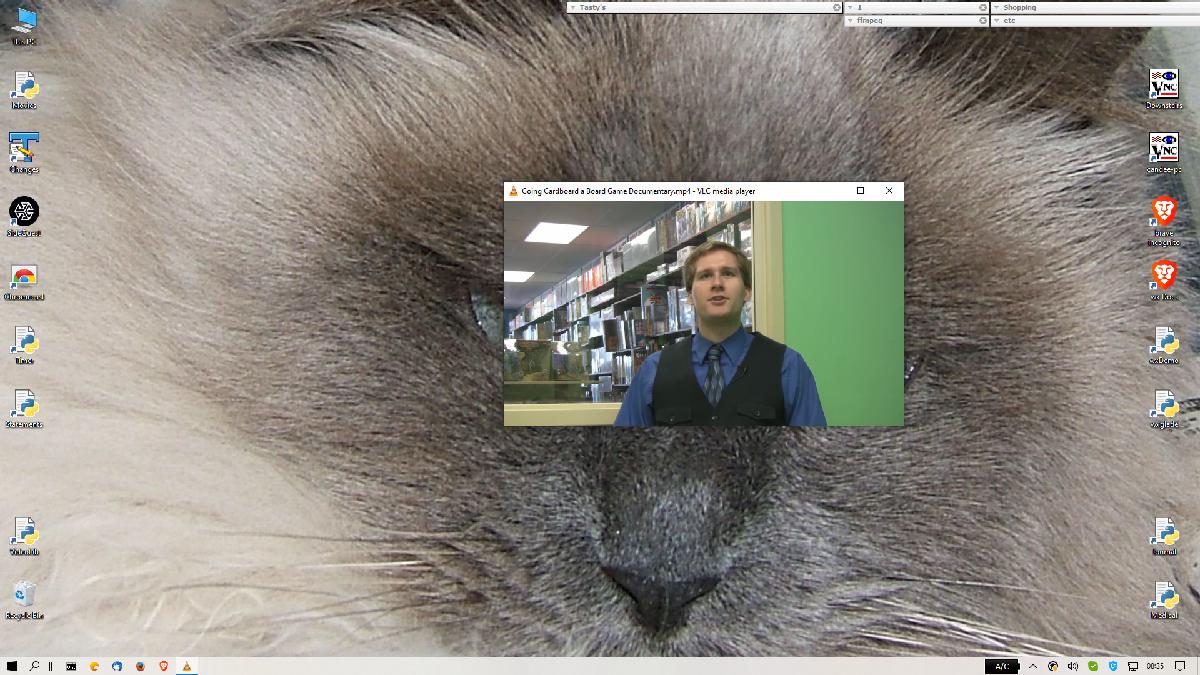 Clearly, the first image is what I currently get. The second image is what VLC should display. The black borders do not add any functionality. They are completely useless and should be removed.

I expect the developer will reply "but if you remove the borders and resize the video to the new window shape, the video will be distorted.".

And, once again, I shouldn't have to burrow deep into the preferences and jump through hoops. It could be a simple addition in the right-click video context menu that says "Remove black borders". Come to think of it, the borders should never be there in the first place.

Imagine, if you will, that a car dealer is trying to sell you on a new model where the car is eight feet wide, but one foot on each side can't be used for anything. Not storage. Not passengers. Nothing. The extra two feet are less than useless be cause they take up space in your garage that could be used for something else.

Would you want eight inch borders added to the sides of your TV or monitor that did nothing but take up space? "You can always remove them manually if you don't like them", is not a valid response. It's a problem that shouldn't exist.

On rereading my last post I couldn't help but hear, in my head, "This is an ex parrot. It has ceased to be..."

I apologize Jim. It was a long day and I whiffed the first reply. Afterwards I played around in VLC in it's deeper settings and could not find a way to achieve what you are asking for without unchecking the maintain aspect ratio. Now there is a rather long too much work than I'll bother with solution and that would be to write a pseudo video player that inspects the video details and then calls up VLC with the x and y size via command line or maybe the VLC API. I see a lot of the API at https://www.olivieraubert.net/vlc/python-ctypes/doc/vlc.MediaPlayer-class.html

But built into VLC? Nope. I fear the answer is a Python wrapper to query the video details and then play it with your selected preferences since it's not automatic in VLC.

Yup. It's not easily done. But it should be. And you'd think that one of the people responsible for the code would not only be able to understand what it is that I am asking, but also be able to stop and ask themselves, "what ARE those black borders doing there anyway?"

Yes, I could write a wxPython wrapper (in fact I've already done that), but by doing that I lose all of the other functionality available through the actual interface.

and as long as I am playing the video with no controls (CTRL-H, otherwise the minimum width must be sufficient to render the controls), the video is zoomed as requested and no black borders are added. Clearly VLC already has this ability built in.

OK, so I cheated and made a little test. I pressed Ctrl+H then Alt+2 and finally Ctrl+H and had no black bars. I guess we could gen up a script in Autohotkey to do this.