Angry Birds Space HD: it sucks and I love it!

10 Years Ago Updated 10 Years Ago happygeek 1 Tallied Votes 315 Views Share
Manufacturer
Rovio
http://www.rovio.com
Price
$2.99
Pros
Loving the gravitational pull and most of the new cartoony looking birds, addictive as ever
Cons
Not enough levels, you have to pay for additional episodes
Summary
With 10 million downloads in just the first three days of release alone, Angry Birds Space was always destined for success. But with numerous variations on the same theme already available (Original, Rio, Seasons) the big question was whether Rovio could deliver something different. The answer is a resounding yes, and it quite literally sucks. I Love it, and I suspect you will to. Angry Birds Space takes the pig-bashers into unchartered territory and it's as addictive as ever. Buy it!
Rating

When you look at the iTunes download charts you will always find an Angry Bird perched towards the top. That's quite simply because this game app has been the undoubted number one commercial and cultural success story of the App Store. The app developers, Rovio, have been accused in the past of cashing in on this success by rehashing the same format with different backgrounds and a new bird or two under the guise of a 'new' game. A new game that will cost you if you want to play, of course. Personally I don't have a problem with this as both Angry Birds Rio and Angry Birds Seasons have been as addicted as ever, and Rovio regularly update them with freely downloadable new levels to play. 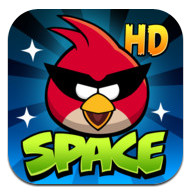 But when I heard that yet another new variation was about to be released I have to admit that I felt more than a little disheartened, wondering if Angry Birds Space was going to be an app too far for the franchise. Still, I downloaded the premium 'HD' version for my iPad 2 on the day of release and have been playing it every spare moment since.

Although you do pay a premium for the HD version, $2.99 compared to just $0.99 for the bog standard game, the far from bog standard graphics are worth the extra. It's not as if a couple of bucks more is going to break the bank, is it? But Angry Birds Space is a lot more than just graphically attractive, it's hugely addictive in a whole new way.

It's addictive because it sucks, big time. 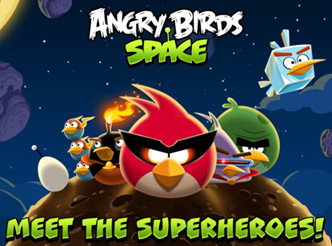 The developers have not, in actual fact, just done the 'new bird, new backgrounds, same game' thing this time around: they have developed a whole new physics engine for Angry Birds Space. This means that the birds behave differently, react to the environment differently and there is much better use of the objects that can be found within that environment when it comes to destruction and pig-bashing mayhem. Everything from being able to explode a bird and watch the energy from that explosion send orbiting asteroids hurtling towards a pig base, through to the brilliant use of anti-gravity on almost every level, is just superbly implemented. 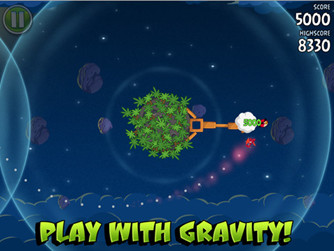 I can only really talk about the iPad version in this review as I have not played it on my iPhone 4S nor have I played the Android or PC versions for that matter. You can assume that all will be just as good though, such is the Rovio way of things. All will, I can assure you, be money well spent as the game really does feel both evolutionary and quite revolutionary when compared to the precious updates I have mentioned.

For a start there are the new birds. Yes, that's right, new birds. Well, OK, many are the same old birds if you are talking about the 'special powers' that they possess, but they have been tweaked and polished and as a result look a bit more cartoony than before but in a way I can really dig. Then there are the truly new birds, such as the one which will freeze blocks upon contact and the use of a quick finger touch, rendering previously hard to break blocks very fragile indeed. Even the 'Mighty Eagle' has been revamped, although I find his new way of appearing in order to cause destruction less intuitive than before. Instead of throwing a tablet to where you want the eagle to fly, now you throw it to where you want him to appear in a black hole of destruction that expands outwards taking everything it touches with it. You don't have to buy the eagle this time (although you can, in various new bundles at various pricing levels) as you get rewarded with three of them when you defeat each episode boss. Anyway, who really wants to resort to eagle bombing? It feels more than a little like cheating to me. 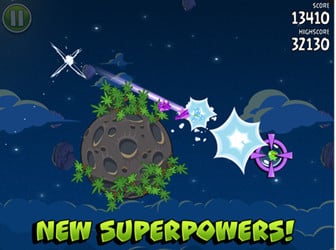 Playing the game requires a whole new strategy now, you can no longer just lob and hope for the best as the pull of gravity effects the trajectory of the launched birds in some pretty unpredictable ways. You soon get used to this though, and it is this 'suckability' that I find the most addictive thing about Angry Birds Space: you have to try numerous different ways of launching your birds now. Maybe a reverse launch heading the 'wrong' way around a planet in order to use the gravitational pull to come in behind a pig tower and destroy it. Maybe you need to throw your 'right angle bird' directly into the gravity field in an apparent suicide mission before tapping the screen to get him to fly where you really want him to hit.

The physics engine really comes into play with the introduction of asteroid bowling balls though. I describe them like this as it is the closest thing I can think of. You hit one asteroid, it crashes into another and before you know it the collision physics have taken over and asteroids are destroying pig dens. Nice! 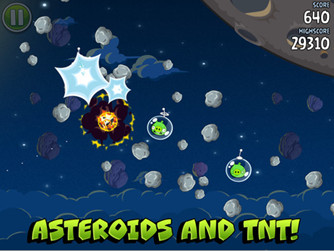 Not so nice after defeating the end boss in the Pig Bang episode, and the end boss in the Cold Cuts episode, and after spending your $2.99, you discover that to play episode three 'Danger Zone' you have to shell out another $0.99 for another 30 levels of fun. OK, I admit that $0.99 is a small price to pay for 30 extra episodes to extend your gaming time, and less than $4.00 for the whole shebang is still blindingly good value for such an addictive and well executed game. However, it still makes me cringe a little having to press the purchase button. I feel a bit unclean, like the gambler digging around for change in order to play the slots one more time.

The good news is that there are also a bunch of free mini-games included, under the guise of the Eggsteroids episode, which are unlocked as you play. The even better news is that each episode gets harder than the one before, and there are plenty of tricky levels there as well. Especially once you've completed them all and then start going back to get your three golden stars for everything. As you will, and you know you will, admit it.

Very nicely said this application sucks as its damm intresting once you starts playing, and I too loves it.

I have also played angry birds and really it sucks

what a games really i m crazy about it

I love angry bird and I am addicted for this game. Whenever I gt free I play only this game.

Edited 9 Years Ago by happygeek because: spam deleted