Hi,
I am afraid somebody somehow broke the usb connector of my Lacie 1TB hard drive (Starck), so I can't connect it ot the laptop anymore. I have removed it from the case and noticed that the plug is actually gone completely and the filaments that used to connect it to the circuit board are broken. Now, I don't have a soldering iron or anything like that, I would just like to be able to access my data in the HD, what should I do?
This is the HD I have http://www.amazon.co.uk/LaCie-Starck-Desktop-Hard-Drive/dp/B002SGATQE

storage
Edited 8 Years Ago by Violet_82

Answered by Octet 45 in a post from 8 Years Ago

Unfortunately without those connectors I don't believe there is much you can do.

Do you have an image to show us how bad the damage is?

Ouch, that really did break off.

I know you said you openned it up, and hence why you managed to retrieve the USB but does the HDD itself have any sort of SATA connector on it?

I am guessing the HDD is just a conventional one, conected to a caddy …

Backing that, the HDD should have a sata connector. Hook it up to your pc with a sata and power cable or buy another enclosure for it. They're really pretty cheap.

By the looks, that is just a mounting board.

I cant really see. Does it look like one of these? http://www.serialstoragewire.org/images/articles/it24fig1.jpg

Unfortunately without those connectors I don't believe there is much you can do.

Do you have an image to show us how bad the damage is?

well It is damaged in the sense that came off...
Now, the data on that HD is pretty important, I mean I am sure there is a way to recover it, even if I have to buy an adapter of some sort. Or maybe, how about buying a new circuit board? That will have the usb connector in there! 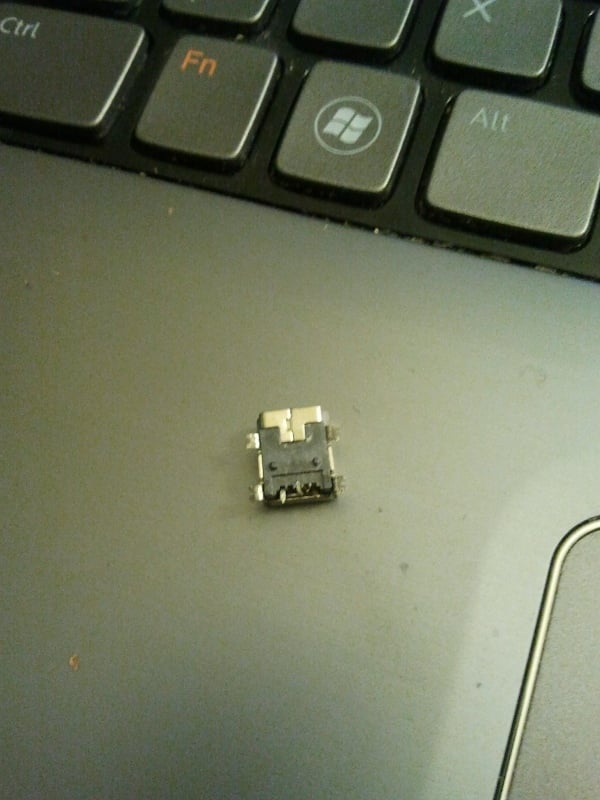 Ouch, that really did break off.

I know you said you openned it up, and hence why you managed to retrieve the USB but does the HDD itself have any sort of SATA connector on it?

I am guessing the HDD is just a conventional one, conected to a caddy with a USB for ease of use. If you can get hold of just the hard drive then you can plug it in either to a docking station or to a SATA + Power connector on your computer.

Backing that, the HDD should have a sata connector. Hook it up to your pc with a sata and power cable or buy another enclosure for it. They're really pretty cheap.

Well the actual HD is connected to the circuit board, here's a pic. If that qualifies as a SATA connector then yes. In the picture you can see the pins. What do you think? 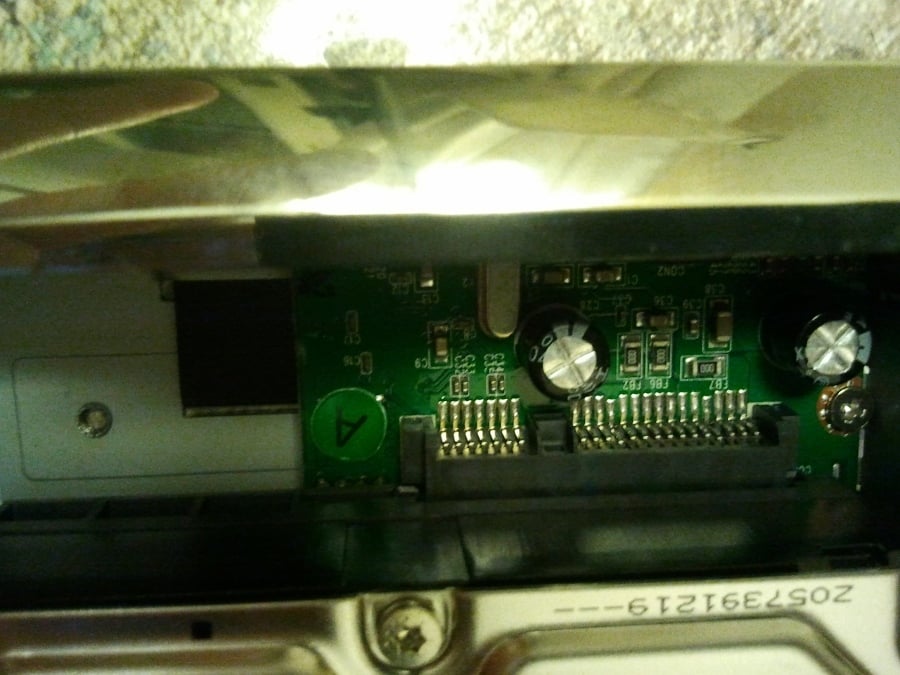 Ah, I can disassemble it if it helps you guys to determine what sort of adapter I need

Edited 8 Years Ago by Violet_82

By the looks, that is just a mounting board.

You can simply buy a SATA cable and power connector and either plug it into your computer or into a docking station.

I cant really see. Does it look like one of these? http://www.serialstoragewire.org/images/articles/it24fig1.jpg

Actually, I think that is an SAS connector after looking at the image mat supplied.

ok, I tell you what, let me remove the whole HD and I will take another picture and then we'll see what to do

If you take off that mini circuit board (most likely an interposer) you should just have a normal hard drive and a SATA connector, SATA being a lot more common and easier to get hold of.

If that is the case, then something like this should do: Amazon.co.uk 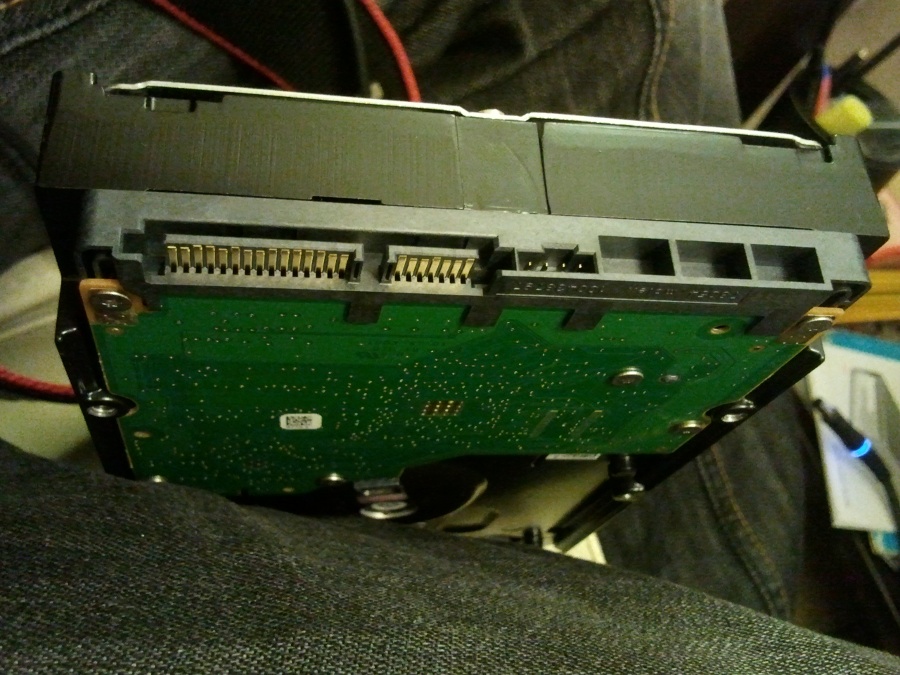 There! those you see on the left were inserted in the circuit board. One is for the power cable (which I believe still works but I will try it) and the other one is for the usb. Is that a SATA connector? I mean I am not an expert but those don't look like pins to me, it's just a solid bloc of plastic with some metal strips

Edited 8 Years Ago by Violet_82

The bit which you removed was an interposer, the left in your image is for power, and the right is for data. Simply buy a SATA to USB adaptor or a similar product and retrieve the data.

Ah good news then. So I will buy the cable in your link. Just one thing: that cable seems to cover both the power and the data: I don't mean to be daft but there are 3 plugs in that cable: the sata, the usb and another one, does that go anywhere? Also, the HD is 1TB: now those apparently need a power source (as you can see I am not such an expert on the subject) so will just the sata cable be enough to power the the HD?
thanks

That item I listed was just an example which I found quickly on Amazon, and after just taking a second look at it, the reviews suggest it suffers from a lack of power (sorry).

In theory, that big block plugs into your hard drive as it contains both the SATA and power cables joined. The power is then taken through the USB, however because of the size of your hard drive (the physical size, not the storage capacity) you are likely to need something with more power.

A docking station should suit your needs.

uhm...I see, so by docking station you mean something like this:http://www.ebay.co.uk/itm/2-5-3-5-SATA-IDE-HDD-2-Dock-Docking-Station-e-SATA-Hub-New-/171021539000?pt=UK_Collectables_HardDriveEnclosures_RL&hash=item27d1ad96b8 (problem is I have to find something compatible with linux!)
I was thinking would a double usb suffice in terms of power then, something like this, similar to your cable http://www.amazon.co.uk/DeLOCK-61883-Converter-Adaptor-22-Pin/dp/B005OMXBN2/ref=pd_bxgy_computers_img_y

Yes, that is the sort of thing I meant by docking station, but as with Linux (woot) you might have difficulty in terms of compatability.

Unfortunately that USB lead you have found is rated for 2.5" HDDs but by the looks of it you have a 3.5" and therefore something like this might be more appropriate. I haven't read the reviews of it yet, but since it has the external power supply it shall have more than enough power to run your HDD.

You can always open up your desktop PC (If you have one) and install it in there with a SATA cable and one of the power cables in your PC.

Thanks @AHarrisGsy this is really interesting actually, didn't know such a thing existed, but after having had a look, I think the docking station is the best option as opposed to have too many cables running all over the place. I was just thinking though, if it is worth first of all to buy a soldering iron and try to solder the connector back to the pins? Is it doable? I mean the pins are broken but the the melted metal should do the work don't you think? If that fails then the docking station

@mat1998x, no unfortunately I don't have a desktop machine, but another spare laptop...I wonder whether I can use that.

The thing is thought, if I can of course, I am looking for a more permanent solution, because I wouldn't want to buy another external drive, so I will have to look into either the soldering iron or the docking station, or both.

You can try the soldering iron by all means, however I think it shall be difficult to either even begin attaching it or if you did to try and maintain a good connection. I certainly wouldn't trust it in the long term, but as an emergency file recovery it could be possible. The problem is that unless you can borrow one, a soldering iron would cost about the same as a docking station so I would go for the more permanent solution.

With a laptop, it is likely to be using a 2.5" HDD, which means you won't be able to fit it into the computer to begin with, you could buy a male to female adaptor though and run the HDD on the outside, again it would only be for emergency file recovery.

Personally I would either buy a docking station, or the cables and use the HDD as a simple HDD. If you are going to do it like this however, it might be worth investing in a plastic case for it such as a project box. This way it shall be protected from static and the day to day handling of it.

i have a dock simular to the one in the link ,i like it better than a enclosure as i work on other peoples hdd and not having to take a external enclosure apart all the time to put the customers hdd into it to work on it , ,but i have enclosures with hdd in them for file storage ,I would reccomend a new enclosure if you want to take the drive with you .safer less chance of damaging the hdd when traveling/storing or just moving about ,with the hard drive

I think you're right about the soldering iron thing. I mean I had a look they are actually cheaper than the docking station, but having had a look at the connector more carefully, I can see that most of the metallic pins are missing, so I think you have a point in saying that the connection won't be as stable as ut shoukd be. I think if I solder it I will end up buying the docking station anyway so I might as well buy it now without any fluffing aroung. I like the cable option but i am abit worry that wi Ill have too many cables flying around, and then I will have to look for a box that fit the HD and that has big enough holes to fit the cable plugs etc. No, a docking station will be!
One thing I would like to pick up on, the static you mentioned. Well, if I go for the docking station, when I have finished using the HD, can I leave it inserted in the docking station all the time even if it is okk or if I use it for something else? If not I can disconnect the HD and put it back in his current metal box, where it has always been.

Something like this shall do, or the metal case should be ok however with it being metal that is also conductive and therefore might cause some issues, however if it was like this when you got it and it hasn't been a problem this far, then there is no reason why it shouldn't be fine to use again.

ah ok I see, I think something like that is actually more versatile than the original heavy case, I might get that too then. Well thanks a lot for all your help, I have bought the docking station, so I will try it as soon as it arrives!
thanks again

like that little storage box, i just take mine out and lay it on my desk ,so far safe