Can you feel the force with Angry Birds Star Wars? 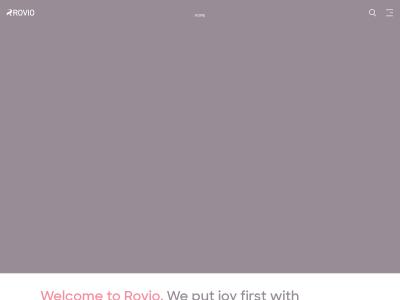 http://www.rovio.com/
Price
$2.99
Pros
It's a Star Wars and Angry Birds mash up!
Cons
More in-game purchases than ever, levels not that hard to complete
Summary
The Angry Birds franchise continues to go from strength to strength, and just when you wondering what Rovio could do next to either extract even more money from a somewhat stale title or deliver an exciting new version of the game (depending upon your view) here's the answer: Angry Birds does Star Wars in an official tie-in with another franchise that many would argue is long past the sell by date. But, as a standalone game, does Angry Birds Star Wars deliver? DaniWeb has been burning the lightsaber at both ends to find out.
Rating

Some might argue that there are already quite enough different versions of Angry Birds to last a lifetime, or at least a lifetime of minutes to waste on a mobile gaming platform such as a smartphone or tablet. There is some merit to this, and personally I would be quite happy if Rovio just kept adding new levels and new birds with new attack capabilities to the original game. I wouldn't even mind if they charged me a small fee for these new additions by way of in-game purchases, as the game would still represent excellent value for money. We are only talking about pocket change here after all, Angry Birds is not in the same spending league as the Call of Duty or Halo franchises after all. 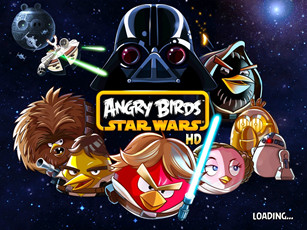 But that's not the way that Rovio has chosen to play it, instead it has released a steady flow of new Angry Birds titles over the last couple of years, and like the vast majority of Angry Birds fans (yes, I declare an interest here: Angry Birds is one of the most played games on my iPad and was on my iPhone before my eyesight got too bad to be able to play it that small) I have purchased and played every one of them.

Perhaps I am leaving myself open to being shot down, or plunged into the darkside, by my next admission: I'm not a Star Wars fan. I have found all the films, yes even the originals, to be hugely generic and predictable and boring. There, I said it. Of course, Star Wars is embedded in modern culture and even a non-fan such as me gets the references and characters so I was as keen as anyone to try out Angry Birds Star Wars on my iPad. 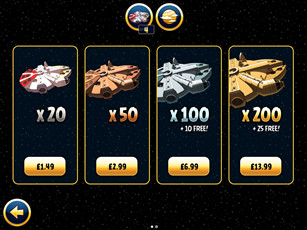 First of all there is no escaping the fact that, once you get past the Star Wars style intro videos and into the game itself, Angry Birds Star Wars levels share an awful lot with Angry Birds Space levels. They look and feel much the same, with the gravity-pull planets, and the asteroids, and the being set in space. No great surprise, this is Star Wars after all.

I am told, by those who know better than myself about such things, that Angry Birds is something of a retelling of the original Star Wars story. I was also told, after I asked 'which original Star Wars story?' that it's the first one, as in Star Wars Episode 4, released confusingly in 1977 some 28 years before Episode 3. Anyway, you start on Tatooine (and I almost got excited by that until I realised it wasn't an inked planet) and work your way to the Death Star.

The angry birds of the title have, fittingly enough, gone all Star Wars for the occasion with new birds now sporting 'the force' and lightsabers and lasers etc. There's even a huge Chewbacca bird, seriously funny. The evil pigs are also now kitted out in Star Wars style outfits and can be found in little spaceships, pig sty fighters maybe? 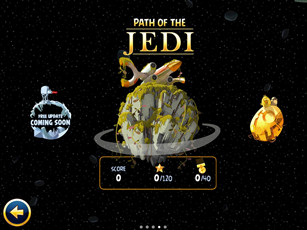 The lightsaber is a good weapon, a tap of the finger gets the bird to whip it out and slice through pretty much anything around it. The force is a bit hit and miss, adding some kind of unseen push in the direction that you have tapped. I like the laser bird best, which apparently is meant to be Han Solo for you Star Wars fans out there, releasing a triple burst laser fire when you tap.

The problem I have with this new entry in the Angry Birds catalogue, at least as it impacts upon the iPad version of the game that I have played, is twofold. Firstly the levels are way too easy. Even the ones that require you to bounce lasers off of falling scenery in order to complete them only take a couple of goes to work it out. All in all I found myself whizzing through the levels in no time. OK, so I wasn't getting three stars and finding all the hidden golden easter egg things, but then again I do have a life.

Secondly, and this one is perhaps harder to forgive, there's the small matter of the large amount of in-game purchases. Want to unlock that extra planet and play the 40 stages on it? OK, it will cost you. That's about a third of the game that you just bought, yes I know it's only three bucks, that you have to unlock by paying for it again rather than earning through gameplay. The amounts are meagre, just pocket change, but the bad taste it leaves in the mouth is enormous. 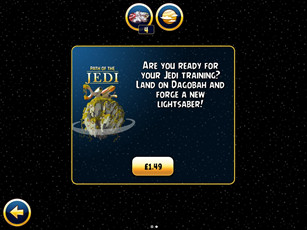 The same applies to the replacement for the Mighty Eagle that destroys everything, the Millennium Falcon inspired, erm, Mighty Falcon. You get a handful for free, but if you want more then you can pay for them. If you want bigger ones, you can pay for them as well. It's all starting to get a little too mercenary for my liking, and I have made a conscious decision not to bother looking at the Falcon gold medals and awards as they require these purchases to attain. It's a real shame when a developer forces a player away from parts of the game like this. Sure, make money but make it by setting the price of the game at the correct leevl to start with and include everything in the game for that.

Overall then, Angry Birds Star Wars is much as you might expect: fun to play, not too taxing on your time as you can hit it in small spurts when you get a moment, and with some inventive new twists. It's not just for Star Wars fans, although they will get the most out of the constant nods towards the movies. It's great value at $2.99, just don't start dipping into all the in-game purchases or that value proposition starts to look like Darth Vader's love child... 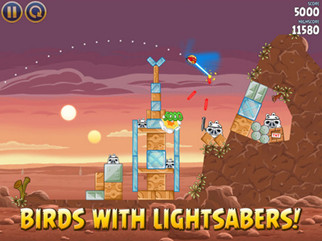 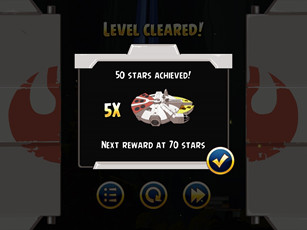 the angry birds....very creative and popular game of tablet, iphone.

i dont like any other version of Angry Birds ...Just first one Was the best one ...i must say ...

Lets be honest, angry birds is just so overated...

BTW, I bought this app about 3 weeks ago and it doesn't open...

To be honest, No. Because the developers may not have played it after developing it.

As for machinery and the like some of that came from a time when things were assigned gender because of the language. Some languages have masculine and feminine or even neuter or neutral gender assignments.

Overall then, Angry Birds Star Wars is much as you might expect: fun to play, not too taxing on your time as you can hit it in small spurts when you get a moment, and with some inventive new twists. It's not just for Star Wars fans, although they will get the most out of the constant nods towards the movies. It's great value at $2.99, just don't start dipping into all the in-game purchases or that value proposition starts to look like Darth Vader's love child...

Interesting article. I play it couple of times. It's not bad. I find it amusing.

BTW, I bought this app about 3 weeks ago and it doesn't open...

I think you have to ask Yoda to open it for you because you are not a jedi yet. =)

I think you have to ask Yoda to open it for you because you are not a jedi yet. =)

Been more than a month... so yeah, i got to ask yoda to help me launch the app... Where is AD when i need him (hope he doesn't get mad :D)