9 Years Ago Updated 8 Years Ago happygeek 0 Tallied Votes 743 Views Share
Manufacturer
Lantronix
http://www.lantronix.com/it-management/xprintserver/xprintserver.html
Price
$99.95
Pros
Easy installation for most users, compact and well designed
Cons
Costly, requires power socket and connection to router and printer, installation gets complicated if your printer isn't supported
Summary
All in all, the xPrintServer Home Edition was a joy to use. It really did do what it said on the box, and did it with consummate ease. The only downside is that the convenience it offers, that of not having to keep your laptop running in order to use a cheap print server software app, comes at considerable cost. Of course, if you were considering buying an AirPrint-enabled printer just for iOS print capability then the xPrintServer will probably save you money. For everyone else, it's a bit more of a reach to justify the expenditure.
Rating

If you have an AirPrint-enabled printer, the act of wireless printing from your iPhone or iPad is pretty much a no-brainer. If you don't, then there are a number of apps that use a laptop as a print server. While these, on the whole, work OK they do require that your laptop is up and running whenever you need to print something and that's inconvenient at best and often simply impractical. What would be cool would be if there were some fire and forget hardware solution that just worked with the printer you happen to already have at home. Enter the Lantronix xPrintServer, which promises to do just that. But does it work? 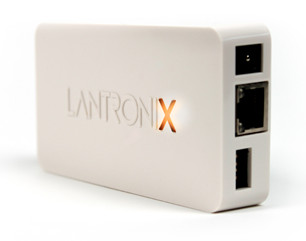 This was the newly released 'Home Edition' of the xPrintServer that I had for review, and which builds on the success of the 'Network Edition' device that hit the market a year ago. It's aimed at consumers and small business with USB-connected and networked printers. I plugged the xPrintServer into my Wi-Fi router via a spare Ethernet jack and the supplied cable, then my printer into the xPrintServer with a USB cable (not supplied). After some furious flashing of the green and yellow Ethernet LEDs on the back of the xPrintServer, and the same with the now orange 'X' of the Lantronix logo on the top of the device itself, the printer had been auto-discovered and provisioned, the relevant drivers downloaded, and as the 'X' was now pulsing a steady orange I knew I was good to go.

Printing from your iOS device, and the xPrintServer Home Edition is limited to connecting to two devices at one time so it autodetects the nearest couple, is as simple as hitting the print button from an app or your browser and selecting the relevant printer.

You may not be so lucky though, as although the xPrintServer does support more than 4,000 printers from the likes of HP, Canon, Lexmark, Xerox and Epson, yours might not be on the list. Lantronix reckon that if you email the make and model number they will provide support, so that's worth knowing. Then there's the printer protocol thing, as the xPrintServer requires JetDirect, LPD or IPP protocol support. You should be OK, but again you might not be. Oh, and if your printer is not on the same subnet to which the xPrintServer is connected, then the auto-discovery option won't work. Which isn't the end of the world, but does mean delving into the browser-based admin console which is similar to the type that are used to configure most wireless routers these days.

that looks really good, wonder if santa will get it for me? ;) until then i am making do with my print n share app lol

Edited 9 Years Ago by shallyfred

I saw it how it looks but never used it.

It's not something good to invested to have.

It's much better to email the docs and print it out.

Everyone has different preference. It really depends who really wants it.

This looks like a very practical solution for a very common problem.