Im Currently usin Tek 6633 All in one Windows 7 ultimate 32bit(I upgraded from Windows Xp Home edition) , Intel Atom Cpu N270 @1.60GHz ,Mobile Intel 945 Expgress Chipest Family...although Im using a better version of my Previous windows, my Pc is not perfoming as I would like, its lacking speed(Rating 2.3), Graphics(Rating 2.1), gaming Graphics (rating 3.0)....what do I have to do to make it run at its best...what do I have to get...Hardwares, softwares etc ?? Please

A 1.6 GHz Atom processor running a 32-bit OS is not going to get much better, performance-wise. It is probably already doing its best.

I agree with rubberman. Don't expect much from that computer. I mean Atom processors are meant for very small netbooks and for embedded systems. I've seen plenty of Atom CPUs used in embedded system (e.g., robotics), because they are top of the line CPUs for that kind of a small package. They perform great, that is, not for running any kind of Windows OS or other desktop operating system, but for running robot control software and stuff.

If you want to get the most out of the computer, you should consider using an operating system that is more appropriate for such a system. Try a Linux distribution instead, that's my recommendation for anyone looking to give a second life to some older / weaker computer.

Intel Atom CPUs aren't known for their blistering performance. They're intended for use in mobile devices, laptops and netbooks, etc. Applications where energy efficiency is more important than raw processing power.

Upgrading the system will be like flogging a dead horse. But if you decide to upgrade anything, I'd suggest increasing the working memory. This should help to reduce the use of virtual memory which is stored on the hard disk. Disk writes are much slower than accessing RAM.

The maximum addressable space for a 32-bit processors is normally 4GB. However there are licensing restrictions that cap the performance on certain Atom devices. Check your user manual or other resources first to see if such a limit applies.

As far as operating system configuration goes, you can try disabling various options in the Performance Options dialog. Navigate to Control Panel > System > Advanced Systems Settings, and select the performance settings on the Advanced tab. 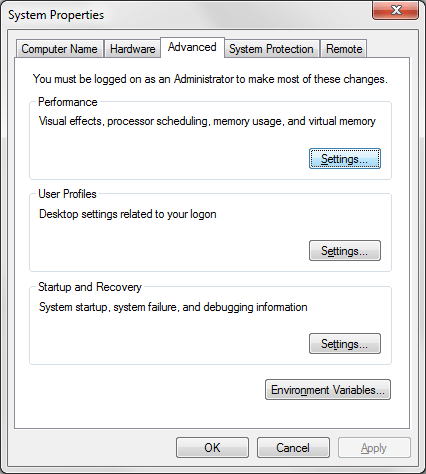 When the Performance Options dialog appears, select 'Adjust for best performance' on the Visual Effects tab.

Also, try to avoid running any applications that you don't actually need. Type 'msinfo32' in a command prompt and the System Information dialog should appear. Navigate to Software Environment > Startup Programs and you'll be able to find out what's being loaded and from where.

The services you have running on a system can also impact performance. Some of these are non-essential and can be disabled without causing problems, others may be critical. For example, Windows Search or SSDPSRV are not critical and disabling them can make a noticeable difference. You can manage services by typing 'services.msc' at a command prompt or in the Run dialog.

Okay Thanx Guys, and Can I upgrade my Processor and Graphics by buying a new 1s? If so which ones

I'm not sure it's worthwhile upgrading the CPU. What would you upgrade it to, another Atom? The mainboard is strongly tied to the chip. If you want something more powerful you'll have to think about upgrading the mainboard, and then probably the power supply unit, memory, and so on. You might just as well buy a new system.

If you want to get the most out of the computer, you should consider using an operating system that is more appropriate for such a system. Try a Linux distribution instead, that's my recommendation for anyone looking to give a second life to some older / weaker computer.

Excellent suggestion! I have Lubuntu working well on a ten year old laptop. Initially tried the full Ubuntu distribution but found it way too sluggish for a 32-bit 1.6 gHz CPU.

By upgrading my mainboard, does that mean I must buy a new PC? And can I take/transfer parts(proccers and etc) from another computer thats not a all in one?

The more special a package is, the harder it is to do any kind of upgrade or replacement of parts. A normal desktop PC is easy to upgrade because the parts are standard, easy to reach, assemble and disassemble, and I've done it many times. A laptop is harder because parts are not as standard, they often have special adaptors or form-factors that are made for that particular model or series of laptops. Disassembly and reassembly of a laptop can be tricky because everything is so tightly packed and delicate (like those darn plastic clips that always break when you pull something out), and there isn't much room for too many additional or bigger components. I have never really upgraded a laptop, or even replaced a part in one, except for replacing the keyboard (which is pretty easy). As for an "all-in-one" computer like yours, I would imagine that it is even worse than with a laptop. I think that all-in-one computers usually have a special motherboard just for that model or series, and everything is meant to be the same forever, not really "upgradable".

The reality is, an Atom N270 is never going to run Windows 7 with any kind of reasonable speed. Definitely not with 32bit and 1GB of RAM. I don't think this even comes close to the minimum requirements for Windows 7 (which, I would say, really needs about 4Gb of RAM to run reasonably well). The more recent the version of Windows you get, the more bloated and slow things become. But, you cannot stick with Windows XP on that computer, because Win XP is obsolete and no longer supported for security patches and stuff, making it really vulnerable to viruses and hacks.

By upgrading my mainboard, does that mean I must buy a new PC?

For an "all-in-one", yes, pretty much. I don't think you can really change the motherboard of such a computer, you have to buy a new one.

And can I take/transfer parts(proccers and etc) from another computer thats not a all in one?

I would imagine that you can keep things like the hard-drive, RAM memory sticks, and maybe a few other components that are probably the same as in any laptop computer. However, those will probably still be very obsolete components that might be useless or incompatible with a "new" computer, just because of the age gap. It's generally hard to take components that are 5 years old or more and try to find a way to reuse them in current hardware. Sometimes, you can cobble together some old components (from roughly the same generation of hardware) to get one beefed-up PC (such as pulling the RAM and hard-drives from different PCs and putting them all in the one with the best CPU), but there is essentially no point in keeping old components with the aim of using them with new hardware. The CPU is not a component that is easy to transfer in general, because CPUs are very tightly integrated to the motherboard and chipset. You can sometimes upgrade a CPU with another one from the same series of CPUs, but that's about it.

What graphics should I get for my tek 6633

To Quinton. I looked at https://www.daniweb.com/hardware-and-software/hardware/threads/439940/tek-6633-all-in-one-motherboard and you need to do TWO THINGS.

Sign Up — It's Free!
Recommended Topics
Not what you need?