IT Security experts Barracuda Labs recently researched the business of selling Twitter followers to those companies which cannot wait to build organic follower growth. Despite the purchasing of Twitter followers being an explicit breach of the Twitter terms and conditions of use, punishable by the deletion of the account concerned, the lure of instant followers seems to appeal to what you might call the 'lazy SEO' demographic. 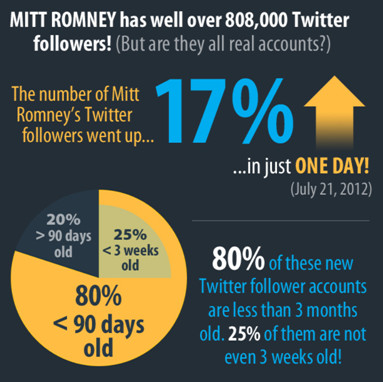 Interestingly, the accounts used to sell fake followers are usually fake themselves. As was the case with the more than 70,000 such randomly sampled accounts analysed by researchers at Barracuda Labs. The study revealed that, on average, a fake Twitter account will be following 1,799 people and have 48,885 followers. Impressive numbers, especially on the followers front, until you realise that the vast majority are fake accounts themselves. If you are buying followers then one has to assume you are doing so to gain 'instant exposure' to a large potential customer base for whatever you are selling, be it product, services or just brand awareness. However, if those followers are faked then all you have bought is snake oil. You cannot expose anything to something that does not exist, after all.

Yet the trade continues, which is hardly surprising when the average asking price per thousand followers is just $18. Prices can be as low as $2 per thousand where the faked accounts are easily detected, up to $55 per thousand for those accounts which are well disguised by keeping following numbers down and adopting a more 'normal' following trend with regards to celebrities and posts.

What is, perhaps, more surprising is the suggestion from the study that US Republican Presidential nominee Mitt Romney (or, rather, his official Twitter campaign account) may well be amongst them.

When Barracuda Labs analysed the Mitt Romney Twitter account it discovered that in excess of 80% of his followers were using new Twitter accounts that were less than three months old. Some 25% were less than three weeks old, and one in four of the accounts following Romney has never posted a single, solitary Tweet on Twitter. It's not just Barracuda Labs that is suspicious of whether these accounts may be fake, as Twitter itself has already suspended around 10% of these new accounts that were following the Romney campaign.

Barracuda Labs insist that the analysis 'closely fits' the same fake user profile that it has seen across it's broader Twitter research, and concludes that "most of these recent followers of Mitt Romney are not from a general Twitter population but most likely from a paid Twitter follower service".

“Fake users should be a huge concern to both Facebook and Twitter because of the threat they create to user trust, online security and the overall community feeling of the social networks,” said Dr. Paul Judge, chief research officer at Barracuda Networks. “This obviously threatens advertising revenue as organisations begin to question the true visibility and reach of their ad campaigns.”

I can understand why fake follower dealers participate in this underhand business when they can stand to make $800 per day in just a few weeks of trading. However, I simply do not comprehend the appeal to the purchaser of such fake followers. They gain absolutely nothing except a tarnished reputation when they get found out, and the ultimate cost to their business could be very high indeed.

You can download the Barracuda Labs Infographic "The Underground Economy of Buying Twitter Followers: Dealers, Abusers and Fake Accounts" which reveals the key findings and has some interesting statistics about the Mitt Romney Twitter feed here.

Romney has never posted a single, solitary Tweet on Twitter. It's not just Barracuda Labs that is suspicious of whether these accounts may be fake, as Twitter itself has already suspended around 10% of these new accounts that were following the Romney campaign.

He was never a tech gadget. He was just a old fashion guy not getting familiar with todays technology. He lost the election because he was not able to communicate with the people.