This isn't a typical hardware post, but I couldn't find anywhere better for it.

Last October, after my previous TV packed in, I bought a shiny new Samsung Smart TV. My shortlist of requirements was:

The reason for my second requirement is that many years ago I bought a Hard Disk Recorder from Panasonic that had the following style of EPG. Note the advert taking up roughly 1/4 of the width of the screen. 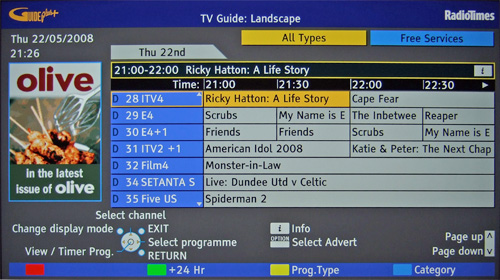 I have not bought anything from Panasonic since, and when asked for recommendations, I've advised against their products.

So, I found a model of Samsung that met my requirements. It did not have adverts anywhere, and the "Smart" features, like Voice Control could be turned off. It supported Amazon Video and YouTube too, so I wouldn't need my Chromecast. Excellent.

Fast forward to the middle of this year, I received a software update from Samsung. Great, software updates will make my already-great experience better, right? Not so much. Now, periodically, the following abomination appears in the actual UI of my TV. 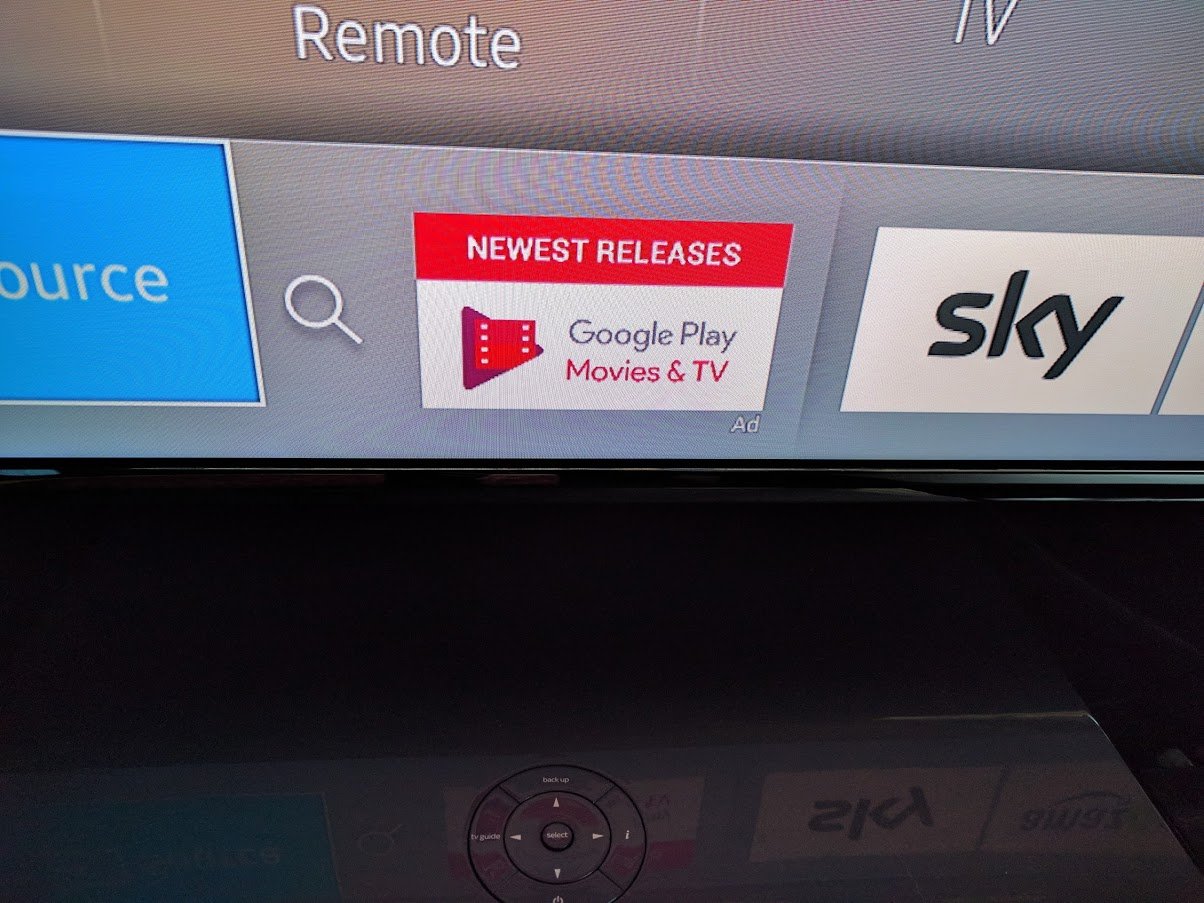 Amazing. On the actual firmware release notes from the website, there's no mention of adverts being added (so I couldn't have checked, even if I'd have wanted to), and now I'm stuck with an expensive advertising board sat in my front room.

Complaining to Samsung hasn't gotten me anywhere, obviously. "We take your complaint very seriously blah blah". So what are my options?

I could pursue returning the TV to the supplier, Richer Sounds, a company that I really like, who had no part in the fault whatsoever.

I could install a spare router between the TV and my network that whitelists only the services that I want to consume via my TV, and blocks everything else (I'm actually going to try that approach this weekend and I'll post the results).

Thirdly, and something I've already been doing, despite it being pathetic and childish, is posting first on every SamsungTV Facebook and Instagram post asking where the ads are in their promotional videos and images. I've revieved plenty of likes and hopefully I can sway one or two people away from choosing Samsung.

At the end of the day I feel let down and pretty powerless. But as far as research goes, I thought I'd done enough. My recommendation to any buyers would be that if you want to be treated like a valued customer to buy from a company that actually cares about being considered a premium brand.

rproffitt commented: At least we don't have to fix the Talkie Toaster (see Red Dwarf for more.) +12

Answered by Reverend Jim 3,918 in a post from 4 Years Ago

It used to be that "if you aren't paying for it then YOU are the product". What the manufacturer is doing is vile. Unfortunately, if the others follow suit we'll be left with no choice other than "if you don't like it then don't buy it."

Factory reset to get it back to an ad-free experience as it was prior to the update would seem the solution, albeit only to the symptom not the disease...

Erk, that's not great either then. Surely a factory reset should return to an as shipped state, not an updated one, otherwise what's the point of it?

In addition to my post, something that made the experience worse was that when I contacted Samsung support they said

Please be informed that the adverts or advertisements depend on the app that you have installed or downloaded from the apps panel.

So, their support teams have been trained to push the blame in my direction. Yet the adverts come from apps that are pre-installed that I cannot disable.

It used to be that "if you aren't paying for it then YOU are the product". What the manufacturer is doing is vile. Unfortunately, if the others follow suit we'll be left with no choice other than "if you don't like it then don't buy it."

Factory reset to get it back to an ad-free experience as it was prior to the update would seem the solution, albeit only to the symptom not the disease...

Tried several factory resets with no joy, it appears to spring back to life at the same firmware version, 1201, as it was before. Samsung explicitly told me that it's impossible to revert to a previous version, even know I know that's a lie.

Edited 4 Years Ago by pty

Erk, that's not great either then. Surely a factory reset should return to an as shipped state, not an updated one, otherwise what's the point of it?

That's what I thought. Although I believe I may have only done a soft reset, which is the only option available in the standard menus.

There might be a full on as it was when it left the factory factory reset locked away somewhere too.

I reckon that a Google search on the model, or the model range, might reveal the engineer menu that would almost certainly enable a proper factory reset even if it is hidden from the consumer.

Sometimes the factory reset switch is a recessed button somewhere on the back of the unit.

So, a quick update.

My spare router that I tried using as a firewall can't block https traffic, which is unfortunate.

Luckily I had Plan B.

I switched the TV to point at my OpenDNS account, after a few hours I checked the logs

link, for some reason the remote image isn't displaying either :/

The image is on imgur because I was getting nginx errors when attempting to upload it to Daniweb.

So, I've blacklisted samsungacr.com . I've had no new adverts, but I suspect the ones already on the TV will expire soon and disappear. If they don't I'll do another soft reset. I'm avoiding that because it means typing in my 35 character Amazon Prime password using the onscreen keyboard, a task I don't enjoy.

Edited 4 Years Ago by pty
rproffitt commented: Thanks for the list. +12

Not that anyone will be too bothered, but I created a full guide on how to remove the ads.

Here is the link.

Hopefully anyone who happens across this thread in a search will find it useful. Post here (or on Github) if you run into any problems!