http://www.parrot.com
Price
$299.99
Pros
Fun, easy to pick up and get flying, clever piloting functionality, great video filming opportunities
Cons
Not cheap (especially with all the optional add-ons), battery life still not long enough, unlicensed flying restricted in some countries
Summary
Parrot has led the consumer drone revolution, bringing the kind of device more associated with military use right down into the public domain. The latest incarnation of the AR.Drone 2.0 was previewed at CES earlier in the year, and now DaniWeb has managed to get hold of one to play with. But what do the new features such as the Director Mode in the app, the GPS Flight Recorder and a long-life battery bring to the drone enthusiast party? Davey Winder investigates...
Rating

The AR.Drone is what is known as a quadricopter device, and the Parrot drones are probably responsible for kick-starting the whole consumer drone industry. Unpacking the box you immediately notice how light it is, and how little you get by way of stuff to assemble or plug-in. Beyond the couple of hulls, one for indoor use (it has rotor damage protection) and one for outside, the battery packs and the charger, there's precious little else. Well, you get some stickers for playing augmented reality and target games, and rather worryingly some double sided tape for making repairs to the drone itself. There's no remote controller to pilot the drone, for that you use your smartphone or tablet. In my case I used an iPad with the relevant piloting apps from the App Store, but there are apps for Android available from Google Play as well. 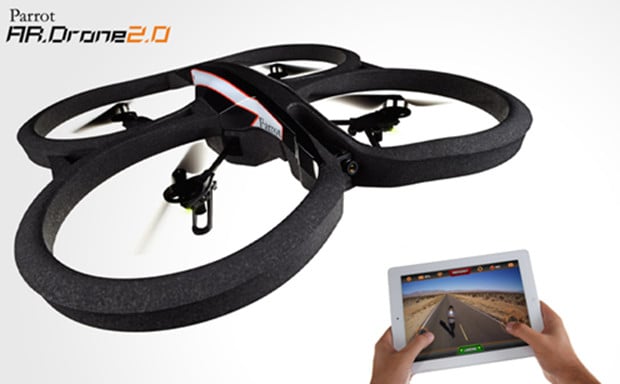 Stick the bits together, fire up the app and start flying. It really is as simple as that. The AR.Drone uses Wi-Fi for piloting control, which provides an effective range of about 50 meters or 165 feet and comes with a built-in stabilization system to make flying as easy as possible. The addition of a 1280x720 HD camera for taking both stills and recording video adds enormously to both the fun and function of the drone and elevates it above being just a toy. As well as the recording capability, you also get real time video feedback through your smartphone or tablet as you are piloting the thing. Cool!

DaniWeb took delivery of a review unit complete with the latest HD battery pack and Flight Recorder module, neither of which come as standard it should be noted. Here's how we got on.

Parrot are using the motto 'Flying Further, Faster, Higher!' for the AR.Drone 2.0 and promising more astonishing flights for drone fans. Much of the excitement and astonishment would appear to come from the availability of a new high density battery which increases the flight time by 50%. Before you get too excited though, probably best to remember that this means your drone will still only be able to fly non-stop for 18 minutes absolute maximum. This HD Lithium-Polymer battery is an optional accessory that will set you back a further $69.95, but it's a must have in my opinion if you want to be able to get any real enjoyment from the drone. Without it, your flying time is so short that no sooner have you started filming something than you have to stop and land the thing. 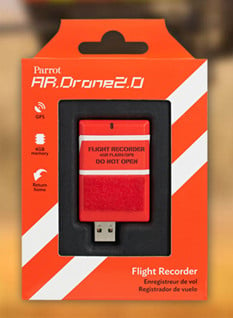 The 'black box' flight recorder module is also a must have on all commercial aircraft, and now the AR.Drone has one as another optional extra. It's not cheap, costing $129.95, but it does enhance the drone experience by saving flight data and plotting GPS-localised information in 3D which can then be analysed using AR.Drone Academy maps. The GPS module is accurate to +/- 2 meters, and will save the position of the quadricopter throughout any flight. Replete with 4GB of flash memory, the flight recorder lives up the recorder part of the name by providing the ability to also record around two hours of HD video which can then be shared via the AR.Drone Academy if you like.

Which is all well and good but not very exciting or astonishing if you ask me. However, both come to the fore when you realise that plugging the flight recorder module into your AR.Drone provides access to some rather unique and interesting functionality. Firstly, there's the click and go piloting mode which lets you define a destination by clicking on the smartphone or tablet screen you are using to pilot the device. Click on the map, where both yourself as pilot and the drone you are flying will be geo-localised, and the drone will head for the destination after the altitude and speed are adjusted. Of course, you do have to bear in mind both the battery life and Wi-Fi range when setting a destination point, the drone might be clever but it's not magic. What is magical though, is what I call 'ET Mode' and Parrot refers to as the return home feature. Just a single click on the home button and the drone will return to the original departure location, once again assuming it has the battery power to get it there. For the experienced AR.Drone pilots out there, I am also reliably informed that the flight recorder module is fully compatible with the MAVLink Open Source communication protocol, and so can therefore be used with the QGround Control solution for defining flight routes. 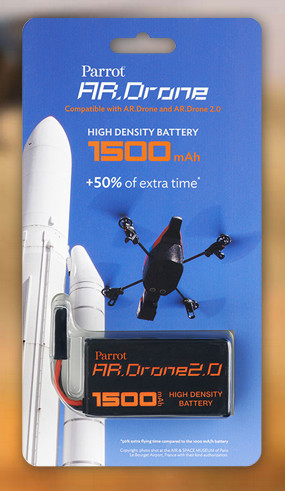 OK, so you know it will fly for longer, and you know it's got pretty darn clever with the whizzy piloting functionality that the flight recorder module opens up, but what can you actually do with it? That's the big question that is hard to answer, at heart it's a big boys toy and as such doesn't really need to do anything as much as just 'do'. Actual real world applications vary from leisure flying, in the same way some people fly remote control model aircraft or kites, through to commercial applications such as surveying tall buildings or engaging in aerial photography of events. For most people it's the ability to actually see what the AR.Drone camera is seeing, via your smartphone or tablet, that is the real key to functionality. Being able to record that view just adds to both the function and the fun, and the new Director Mode feature for iPhone and iPad equipped pilots takes that fun into a whole new dimension.

Available through the Parrot AR.Drone 2.0 piloting app, this feature provides drone pilots with the opportunity to create video using a whole bunch, well nine in fact, of pre-registered movements such as forwards and backward travel, panoramic, crane and so on. The ability to modify drone speed before or during flight makes video direction a breeze. As, indeed, do the camera settings on offer that enable you to modify white balance, saturation, exposure and post-production wizardry like a graph highlighting image vibrations in order to select sequences (courtesy of the new sequence editing function) to post-production edit for improving the image stability. All of this is, you guessed it, an optional extra. However, on this occasion, it's not going to stress your pocket too much as the Director Mode upgrade to the piloting app only costs $3.99

So what else is new with the AR.Drone 2.0? Well, being a new pilot myself, and one living in a windy part of Yorkshire in the UK, I rather like the 'Rescue Mode' which, as you might have guessed, helps the user to get the drone out of a tree or other obstacle they have unwittingly flown it (or had it blown) into. This recovery option comes in two parts, or two propeller movements to be precise: random shake and over balance. These are controlled from the smartphone or tablet piloting device, and are free to the user after updating the app.

If you want to see what an AR.Drone can do then head over to http://www.YouTube.com/ardrone where there are tons of videos illustrating just that.

A 'Power Edition' of the AR.Drone 2.0 is due to be released as a limited edition this month, with colourful propellers, a sleeker hull design and even longer battery life. You will get three sets of colour propellers (red, orange and blue) and a piano black set of hulls. The additional flying time (36 minutes) comes courtesy of the inclusion of not one but two of those HD battery packs I mentioned earlier. All of this does come at a price though, and doesn;t include the flight recorder module sadly: $369.99

Technology is experiencing gradual change !! I out time we never think of a drone carrying camera!!