http://www.HP.com
Price
Starting $879, As Tested $979
Pros
Compact design, Fast CPU, Up to 8 GB, Useful bundled software
Cons
Limited graphics capabilities, Limited Customization
Summary
A Windows 7 Pro All-In-One with a 21.5â€ 1080p touch screen ready for windows 8. The machine runs on the Intel Core series processors with the i7 as an available option, but like most All-In-Ones is limited in customization.
Rating

The PC world is an ever changing one and according to trends the All-in-one market is going to show a large growth in the year to come. In addition touch screen devices are steadily gaining in popularity. With the planned Metro Interface of the Windows 8 operating system the touch screen trend doesn’t seem to be slowing any time soon. HP’s TouchSmart Elite 7320 brings these facts together is a powerful and affordable package for your business, and I got to take one for a test drive. 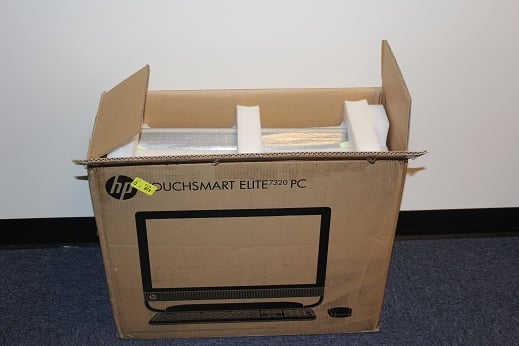 We all know that these machines often lack the customization that would be found in a traditional tower, especially ones targeted at businesses, and the TouchSmart Elite 7320 is no different. If you are looking to have complete control over each component that goes into you PC then you should look else where. That being said this machine does have a place in today’s business world. With its powerful processors, space saving design and energy star 5.0 rating there are a lot of places where the TouchSmart Elite 7320 will fit in just fine. 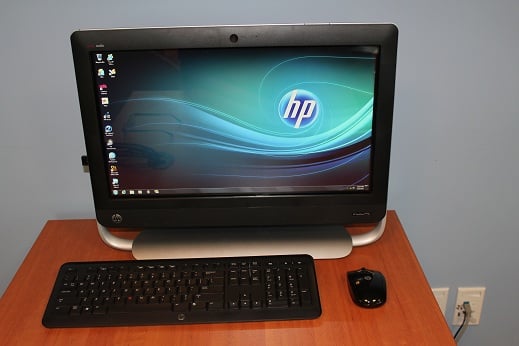 On first removing the TouchSmart from the package the construction felt solid. There is a metal frame that secures the screen to the base. The screen tilts on the frame from 0° to 30° smoothly and held still once you set the angle. The silver and black design looks good on this machine, and it is one of the slimmest All-in-Ones I have ever seen. The screen is a 21.5” WLED 1080p HD Display with a contrast ratio of 1000:1. This means the blacks were very dark, and colors stood out crisp and clear. The monitor was clearly visible at very wide horizontal and vertical angles; according to HP it’s up to 160° for both. I was initially concerned about how the screen was smooth and slightly glossy, despite the anti-glare coating; however I only noticed a glare when the screen was off or very dark. 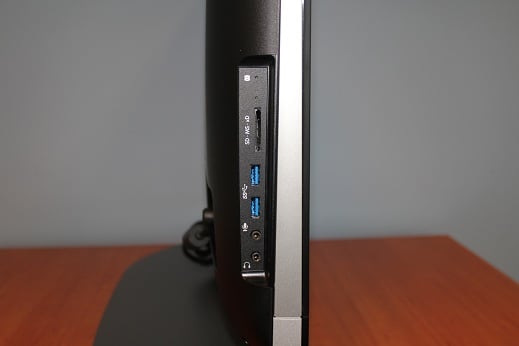 I am sad to say that, despite the beautiful display, the only available graphics options on the Elite 7320 are the Integrated HD Graphics on the Intel Core processors. This is one of the biggest complaints that I have heard about business class All-In-One PCs, and when I spoke with HP we discussed their stance on the issue. They state that currently the only Elite All-In-One that offers full graphics cards is the TouchSmart Elite 9300. However, in the upcoming year they are planning on bringing discrete graphics options to many of the other All-In-Ones in HP’s Elite PC lineup, indicating that he too has heard these complaints. Despite the absence of discrete graphics the HD display was beautiful.

The touch function on the screen is using Optical Touch Technology. This means that, unlike most cell phones and tablets, any object can be used as a pointing device and the screen will respond. It works with a pair of infrared light sensors placed around the edge of the screen. The sensors pick up on the interruption of the infrared light when an object is placed close to the screen. Currently HP’s 7320 can pick up on up to two touch points at a time, but states in time they want to increase that to 5 or 10 depending on the device. In my use of the touch function I found it to be accurate, but often hitting higher than I intended, possibly because of the location of the IR sensors. After a while I am sure it would be easy compensate for, but I found frustrating at times to close a window or press other small buttons with the touch screen. For this reason you may want to consider an upgrade to Windows 8 once it is released. HP also has plans to improve the accuracy of their touch screens using Projected Capacitive Touch (PCT) technology in the years to come, but states currently the technology is too expensive to incorporate into the 7320 and keep the current price point. 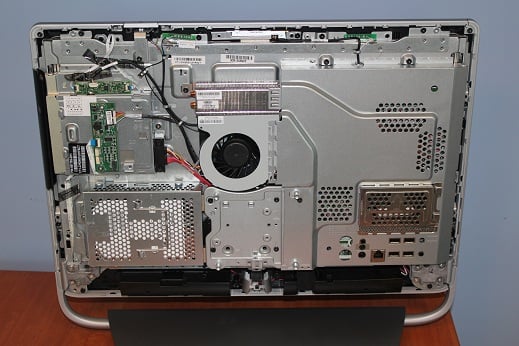 Under the hood of the TouchSmart is your choice of Core i3, i5, or i7 processors. The 7320 is shipped with up to 8GB of RAM, and Hard Drive options up to 1TB. Some of the hard drives HP is offering include the Smart IV Technology, which will warn users of imminent hard drive failure by actively monitoring the drive’s activity for problems. Ports on the machine include 2 USB 3.0 slots, 4 USB 2.0 slots, a 6-in-1 multi-card reader, headphone and microphone jacks and a gigabit ethernet card. Wireless is an available option, and the SuperMulti DVD writer can be upgraded to a Blu-Ray Combo Drive if you desire. Included with all builds of the TouchSmart 7320 is also Beats Audio. This was my first experience with a Beats Audio computer and I will say I was impressed with the difference in the audio quality. While only using the built in speaker bar on the PC I heard an increase in bass and clarity in the audio when the Beats system was turned on. 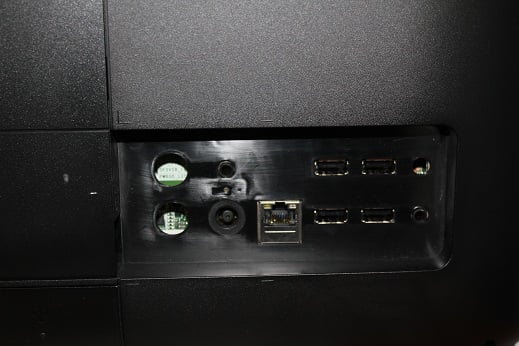 HP wants to make sure that their PCs withstand that test of time. With the included 3/3/3 warranty HP offers next business day on-site support, 24 hour telephone technical support based in the US, and all parts and labor coverage for 3 years. HP also included software tailored to businesses that will insure that your data and equipment are secure called HP ProtectTools. Some highlights of the ProtectTools software include the Device Access Manager and CompuTrace. The Device Access Manager allows restrictions on access to data on the network, control over the use of external storage devices and can block the use of certain services, like WiFi and Bluetooth. This will ensure data can not be accessed or copied without permission granted either through sets of profiles or configured individually. The CompuTrace software included will track the machine through both WiFi and GPS. If the computer is moved outside of a designated area it can be configured to lockdown, known as bricking, or alert the owner of the computer location. Unlike other computer tracing software CompuTrace is built into the BIOS and not the Hard Drive. This means that even after a Hard Drive replacement the computer can be successfully tracked and recovered.

Side by side with other All-in-one computers the HP TouchSmart Elite 7320 is a great buy. Between its power, included software, and a price that is less expensive than comparable builds from Lenovo and Dell; if you are in the market for an All-In-One there are few reasons to look elsewhere. 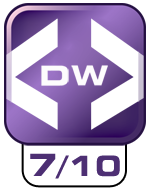 hp windows-vista-7-8
About the Author

I am a 26 year old IT Repair tech, with a focus on VOIP and Broadband Networking. I have been in the field since 2005, but, thanks to my grandfather, have always had a deep seated passion for computers. He worked with IBM for over 20 years and would always make sure there was a PC in my home to play with.

I have been married since October of 2010. My lovely wife, Vanessa, is a huge part of my life.

It is really good information. Thanks a lot to you.